Bros takes all of the common tropes of romantic comedies and puts a fresh coat of rainbow paint on them by making them true to the queer experience without making us the butt of the joke.

Romantic comedy is something that we are all too familiar with. Even someone who doesn't like those movies is familiar with all of the tropes that come with them, to the point that making fun of romantic comedies is just as much of an industry as making the movies themselves. It's not surprising that someone decided to make a gay romantic comedy, but it is very sad that it took until 2022 for it to happen. However, maybe now is the right time because there was a very specific shift that needed to happen for a movie like Bros to come to fruition. Queer people have been the butt of the joke for a long time, but Bros makes queer people part of the joke instead of just the punchline. There are so many funny things about being queer and queer culture, and Bros makes fun of those aspects of queer people's lives without being mean-spirited about it.

That's because the people involved in the script and in front of the camera of Bros are queer people, and they are drawing from their own life experiences, which are so incredibly different. The first thing the movie does is make fun of the fact that you can't just make a normal romantic comedy, make the heterosexual couple queer, and then call it good. Queer people and queer dating is not homogenous, and it is incredibly different from the way straight people date and fall in love. The movie still gives a rather narrow look at queer culture, really only looking at how gay men date, but doesn't touch on how different it is for lesbians to date, for example ["what does a lesbian bring to a second date?" "A U-haul"]. The movie acknowledges that, and those little details are the moments that will generate the most laughter.

Bros is absolutely funny in a way that is going to make a lot of people uncomfortable. Then they need to sit back and think to themselves about why this movie specifically is making them uncomfortable. The humor is extremely niche, but at the same time, the script does the work to make it approachable. You aren't going to make a gay romantic comedy that is going to be the rainbow mirror to the heterosexual romantic comedy. The underlying story is exactly what you expect from this type of movie, but with little twists that make it unique to queer culture in the best possible way. It doesn't exactly remake the wheel when it comes to the rom-com genre, but that's okay; this isn't here to be groundbreaking in that particular way. Bros is here to be the kind of movie that straight people get every February, and no one blinks an eye. It tends to lean more into the comedy aspect than the romance, but there are some genuinely sweet moments as well.

Bros will be groundbreaking in terms of getting the queer foot in the door when it comes to romantic comedies and will make way for more movies to do something really interesting with the concept. The film is exactly what it says on the tin, which is fine, and the people seeking it out will have a great time. As for the bigots? They weren't ever going to give this movie a chance, to begin with, so, to be completely frank, fuck them and their opinions. Bros is a ton of fun, and before long, we're going to be inundated with the bad queer Hallmark movies that the film spends its entire runtime making fun of. Progress isn't always linear. 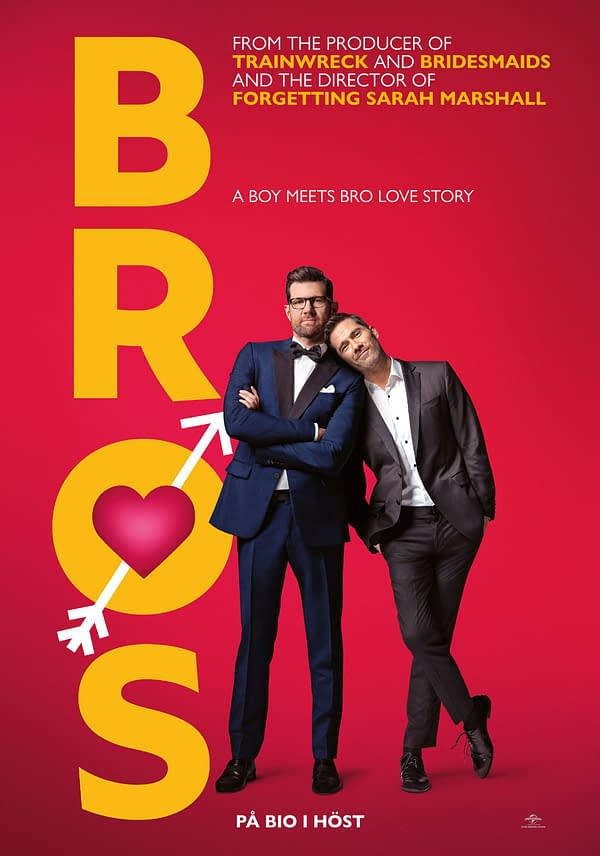 Review by Kaitlyn Booth
8.5/10
Bros takes all of the common tropes of romantic comedies and puts a fresh coat of rainbow paint on them by making them true to the queer experience without making us the butt of the joke.

Taylor Swift Will Write & Direct Her First Film For Searchlight

Taylor Swift has reached a deal with Searchlight Pictures to write and direct her first feature length film.