Morbius is a movie Sony has been trying to make since the early 2000s, and the film being released in 2022 feels like a relic from that early 2000s era of superhero movies, and not in a good way.

Director: Daniel Espinosa
Summary: Biochemist Michael Morbius tries to cure himself of a rare blood disease, but he inadvertently infects himself with a form of vampirism instead.

Sony has been trying to make Morbius happen for pretty much as long as they have had access to the character. When you think back to the cultural mindset of the early 2000s, making a movie based on Morbius makes at least a little sense, all things considered. Vampires were the "it" thing, and the goth thing was very much the aesthetic of the late 90s and into the early 2000s. All of this makes sense for a movie based on Morbius to come out sometime before 2005. However, a film based on Morbius in 2022 is a little stranger and what is even weirder is the script that Sony is putting up on the big screen appears to be a script that they could have used twenty years ago with almost no changes. Everything about this movie, from the special effects to the story to the tone, feels dated. It's like getting transported to that era when comic book movies were ashamed to be based on comic books, so they tried to make everything look cool to fifteen-year-old boys and precisely no one else. That is the only crowd Morbius is aiming for; fifteen-year-olds from the early 2000s who thought they were too cool to admit that they liked comic books.

It really shows that Sony and everyone else thought that they didn't need to really put in any effort, and people would flock to the theater because they can say that this is a Marvel property, and that is enough these days. There isn't a single moment in Morbius that feels original or like something we haven't seen in better movies or, for that matter, in the first two Blade movies. A better idea would be to stay home and revisit those first two Blade movies instead of seeing this if you really want a blast from the past type of experience that has some vampires and better gore. Even the design of the vampire form itself looks dated. They were trying to make the creature design as comic accurate as possible while also bringing it to the big screen and to live-action, but there is a problem here; it doesn't look modern.

The issue of the Morbius creature design has nothing fundamentally wrong with it, and when the character was created in 1971, it probably was perceived as unique. However, that was over fifty years ago, and in those fifty years, people have been adapting vampires for the big and small screen in very different ways. One of the most beloved television shows of the time period that this movie feels like it is a relic from has vampires. One of the movies that kicked off the 1-2-3 punch that started off the superhero boom that we live in today has vampires. That movie actually almost had Morbius in it. There was a whole other series of movies that came out in the early 2000s that had vampires as well. The design of Morbius is not a problem, but the issue is they adapted it straight and then did nothing around it. They just planted this version of the character in the real world and went, "all right, here go," and they didn't do anything to make it unique. They relied entirely on the allure of the Marvel lore for its worldbuilding to make up for the fact that they didn't want to make this world or this version of vampires interesting.

If there is a movie to compare this to, it would probably be Venom, but it is considerably less fun than Venom. However, much like that movie, Morbius also has one cast member that appears to be in a completely different film from the rest of the cast, and this time it's Matt Smith. Smith seemed to be the only one who knew he was in a movie about a dude that splices his genes with a bat and becomes a vampire for Reasons and decided that turning it up to eleven was the only way to go. He is clearly having a ball, and the only time the movie even feels like it comes alive [zing] is when he's on-screen. Star Jared Leto, however, seems to think he's in some super serious melodrama and is playing everything so insanely straight that it's nearly comical. However, it never quite gets to the point where it becomes amusing to watch him mope around with his ridiculously long hair that he never pulls back for some reason and makes growling noises.

All of this could have been excused or at least tolerated if the action made up for everything, but if you've seen a trailer, then you know what to expect. The action in Morbius also feels dated in the sense that they seem to think bullet time is still this awesome thing that everyone must have just discovered because The Matrix just totally blew all of our minds a few years ago. Everything about the fight scenes looks goofy, which would work if the rest of the movie wasn't trying to take all of this so seriously. Then there is the final act, where entire story points and character arcs are just forgotten, and it seems like whole scenes are just not there, and the movie just ends. However, it doesn't just end; it throws in two of probably the worst mid-credit scenes ever put on camera. A scene like this is supposed to make you excited for more; these are confusing, frustrating, and make even less sense than the movie we just saw.

Morbius doesn't overstay its welcome as it clocks in at just under 100 minutes, and while Smith is fun to watch, there really isn't anything here. We've seen all of this before, and it's more apparent than ever that Sony has no idea what they are doing with these characters. Morbius takes itself far too seriously to be any level of enjoyable to watch and truly feels like a relic of superhero films that is older than a decent portion of the audience that might go to see this. When the second credit scene teases more to come, it doesn't feel like a promise; it feels like a threat. 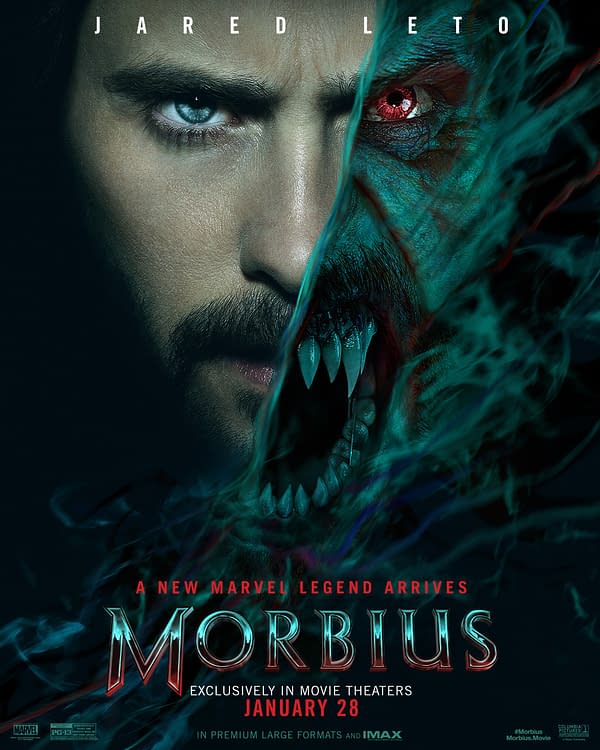 Review by Kaitlyn Booth
2.5/10
Morbius is a movie Sony has been trying to make since the early 2000s, and the film being released in 2022 feels like a relic from that early 2000s era of superhero movies, and not in a good way.