Nobody is a solid action movie with excellent fight scenes and brutal takedowns that will be compared to John Wick but lacks the fantastic world-building the Wick movies that makes a good movie great.

Director: Ilya Naishuller
Summary: A bystander who intervenes to help a woman being harassed by a group of men becomes the target of a vengeful drug lord.

There is an entire genre of action movies that come down to older-looking guys living normal lives. There are exceptions, but they are usually white. They look humble enough, but something pisses them off, and suddenly they are the most deadly man in the room. It's not a new genre, but it is one that has been elevated in recent years. These movies used to be rather flat with really basic plots that didn't have a lot of thought put into them. After all, people were there for the action scenes. However, this movie genre has really been stepping it up in recent years, and one of the movies that really transcended this entire genre is the John Wick movies. When it comes to comparisons, that is the one that most people are going to cite when talking about Nobody, and it's not a bad comparison. This is the story of a man who gets caught up in a world of violence that he tried to leave behind by way of circumstance and being in the wrong or right place at the wrong or right time. Nobody features a family man protecting the life he had built through bloody retribution and action scenes that make you want to fist pump in the best possible way.

And fist pump, you will. The action scene that people will be talking about is the one that really sets off the movie and takes place on a bus. It's a brutal claustrophobic fight scene that only gets more bloody and brutal as it goes on. Star Bob Odenkirk as Hutch Mansell might not look like someone who could kill a man with his bare hands, but this is the fight where he is very much going to prove you wrong. Throughout the entire movie, director Ilya Naishuller does an excellent job of making sure that you are always aware of where Odenkirk is at any given time during a scene, no matter how chaotic it can be. It makes the scenes memorable in a way that only people who study and respect the action genre can really master.

On top of Odenkirk being a great presence, he has a very good supporting cast around him. Aleksey Serebryakov is a fantastic villain who walks that line between being camp and dangerous beautifully, and Christopher Lloyd comes in out of nowhere as Mansell's father. Some of the other cast isn't quite as well used. Mansell's family gets out of the way and out of danger pretty quickly, so Connie Nielsen, as his wife, doesn't have that much to do. It's a shame because protecting his family is the thing that makes Mansell different from someone like John Wick, but they are there, and then they aren't pretty quickly.

If the comparisons to John Wick seem a little ridiculous, it might be because Nobody is also written by Derek Kolstad, who has written all of the John Wick movies. However, the thing that set those movies apart from other movies in the genre was the world-building. The idea of this hotel where assassins could go and none of them could hurt each other was fascinating right away in the first John Wick movie, and the second and third only built on that world. And while there is a lore that goes along with how Mansell got so deadly in Nobody, it isn't quite as interesting as the world-building in the John Wick movies. There is an interesting foundation there that could be built on if this movie is a surprise hit and they decide to make more. However, you don't walk away desperate to know more the way you did from the John Wick movies, which unfortunately keeps the movie from ascending from good to great.

Nobody is a hell of a ride and could very easily become another cult classic of the action genre. While it bears all of the familiar patterns of the screenwriter's previous work, it just isn't quite as interesting as those other movies. Kolstad helped elevate the entire genre with the John Wick series, and unfortunately, Nobody can't quite reach those heights. It still kicks a whole lot of ass, though. 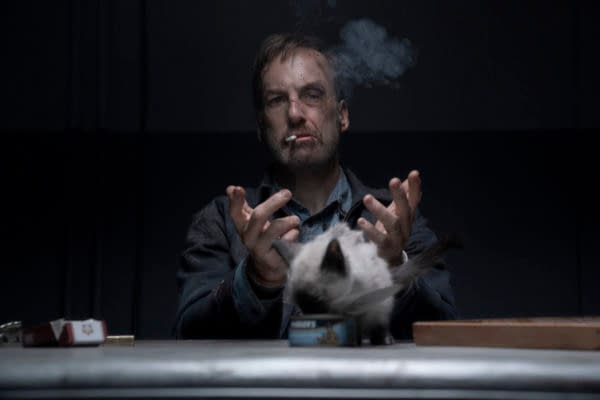 Review by Kaitlyn Booth
8.5/10
Screenwriter Derek Kolstad helped elevate the entire genre with the John Wick series, and unfortunately, Nobody can't quite reach those heights. It still kicks a whole lot of ass, though.