FOX's Bob's Burgers ended its twelfth season with a second part in the adventure of Tina's diary and Bob's bathroom graffiti fears. Warning, some spoilers may be waiting ahead for you so make sure to watch the episode first and then come back if you don't want anything revealed to you. Otherwise, see you on the other side of this image break…

Bob's Burgers brings closure to Tina's story and diary entry in the Blade Runner theme of her current events, along with Bob's own feelings about the upsetting descriptions of the restaurant. It's mainly a journey for the Belcher family to figure out what exactly is going on with Tina and where she would be going after school hours.

Linda gets interrupted by Louise and Gene as she is searching for clues in Tina's room for what she would want for her birthday. Bob joins in on the newly adjusted search to find Tina through hints from her writings. Bob's Burgers brings a hilarious assortment of parodies to follow and eventually the family finds her dystopian robot tale.

Some excellent Bob's Burgers music accompanies moments of the Belcher family heart and comedy. Tina and Bob's journey into recognizing the harm in accepting the thought process of those around them was excellent. It's always great to see how one of the kids, or all of them, connects to Linda and/or Bob when issues come up or life gets difficult. The details in Tina's written world were great overall, but parts of that story felt short compared to the previous first part. Equal amounts in both episodes would have done those portions a bit more justice.

Bob's Burgers ended this season with two great episodes that seem to prep audiences with music and family-centered themes for the film coming to theaters on May 27th. This episode ended the story and things felt complete, including a unique shift in tone for Tammy's character at the end. It didn't beat the previous episode but it did include a satisfying end to the season itself. 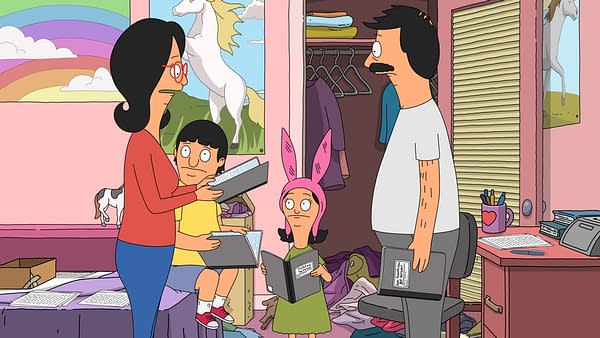 Review by Brittney Bender
9/10
FOX's Bob's Burgers S12E22 "Some Like It Bot Part 2: Judge-bot Day" brought out a favorite piece of the series with the Belchers coming together to solve an issue or help one another. Although some parts didn't equal out in comparison to the previous episode, this was an overall nice ending to season twelve.
Credits
Network
FOX