FOX's Bob's Burgers gave us Tina obsessed with her new camera in the recent episode and it hit a special place in my heart. Anyways, if you'd prefer to avoid spoilers before watching "FOMO You Didn't," turn back now because things won't be spoiler-free after the image jump…

I had a lot of mixed feelings about this week's episode of Bob's Burgers, mainly involving how the episode ended and the basic resolution from Tammy's bad behavior. While it was fun to see Mr. Branca involved in a hilarious cover-up attempt, along with a stranger's adorable family reunion hosted by Linda, it was great seeing Tina get into photography (speaking as a photographer myself), but it all felt off in the end. Tammy's attitude is a regular feature of the show, it's what made the "Mazel Tina" episode so fantastic and hilarious. But in this episode, Tammy became a legit asshole, taking Tina's photo and the negative of it and ripping it apart because it showed her and some others skipping school for slushies and a hangout spot. While I admit I see the honest portrayal in Tina's fear of missing out on skipping school, at a certain point it becomes less likely to fit her character to want so badly to be included when she's presented with friendship and interest like with Susmita.

Bob's Burgers had an average episode this time around, not horrible but not fantastic or noteworthy as much as it could have been with the story it looked like it was going to tell. The parts that gave me a lot of love for it all included the photography moments and the family reunion of those who lived in the Belcher apartment years ago. For now, this episode isn't in my favorites but it did a nice job of expanding the character of the Belcher residence itself, and I loved that. 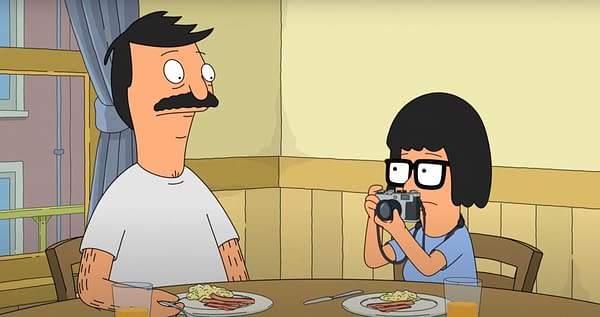 Review by Brittney Bender
7/10
What could have been a lovely episode of FOX's Bob's Burgers filled with reunions & photography drama became an example of taking a character's behavior down an unnecessary path for a questionable payoff, at best.
Credits
Network
FOX

Gene and Bob explore some games at a new virtual reality arcade next to the restaurant in the most recent episode of FOX's Bob's Burgers.

With Adult Swim's Rick and Morty S06E08 hitting our screens this Sunday night, let's take a minute to overanalyze the episode's cold open.

WWE Survivor Series: War Games is happening tonight, and Bleeding Cool has your full card, how to watch, and live coverage right here!

The Walking Dead Cinematographer Duane Charles Manwiller shared another image from the alt-ending introducing the future of the TWD universe.

AEW Rampage: 6 Lowlights from the Blackest of Fridays

The Chadster should be getting ready to enjoy Survivor Series, but thanks to Tony Khan he has to recap this episode of AEW Rampage instead.

What We Do in the Shadows S05: Harvey Guillen Puts In The Work & More

What We Do in the Shadows star Harvey Guillen offers a painful update on how Season 5 filming is going & Kayvan Novak some birthday love.