The fifth episode of Demon Slayer: Kimetsu No Yaiba Mugen Train Arc, "Move Forward!" is where the action finally catches up to the momentum. And damn, was it stellar! We get to see our demon slayers in action and what they can be capable of. The rest of them wake up and now the moment to fight has finally arrived. There are two missions at play as they must keep all humans aboard the train safe while they track and figure out the best way to kill Enmu to finally put an end to the horror that stalks the Mugen Train.

Inosuke has finally woken up and joined Tanjiro in keeping everyone on the train safe from Enmu. Zenitsu and Nezuko are also kicking ass trying to keep all sleeping humans from getting eaten. However, Tanjiro keeps worrying, unable to save people and destroy the demon. But along comes Kyojuro and in one fell swoop, he manages to pretty much destroy everything throughout the carts to get to Tanjiro and instruct him to find the demon's head.

I know I always rave about the animation of Demon Slayer, but the characters and movements are so beautifully illustrated along with the elements they represent. There is something so fluid about the dance and the balance of the two that always leaves me enchanted. That said, seeing Kyojuro in action is just as amazing as seeing Giyuu. I could watch their fight scenes for hours with how badass and beautiful they are. He was able to defend 5 carts just by himself. That said, his trust in Tanjiro and Inosuke that they could get Enmu was what did it for me. I think it is what also pushed the boys to get it done in the first place.

Talking about battles, Tanjiro and Inosuke pairing will never cease to humor me. Tanjiro will always be the best boi, but Inosuke's softness when it comes out always gets to me, he is my favorite tsundere boi and probably the only one who I do not find annoying (like I used to with Bakugo). It was pretty awesome the way they managed to bring Enmu down together by syncing their attacks. It was also a pretty weird place to cut the episode at. It felt like watching a movie on cable and how they always go to commercials at the worst moments. It even made me laugh at moments, to be honest. Once again, while I love the interactions that are to come, I am not ready to go through the upcoming rollercoaster once again. I'm so not ready for the heartbreak that Demon Slayer: Kimetsu No Yaiba Mugen Train Arc is about to deliver. 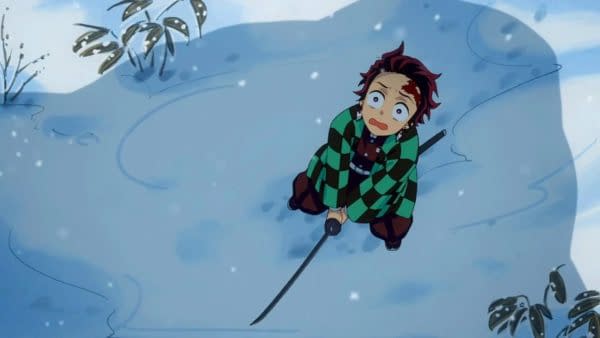 Review by Alejandra Bodden
9/10
Episode five of Demon Slayer: Kimetsu No Yaiba Mugen Train Arc, "Move Forward!" is where the action finally catches up to the momentum. And damn was it stellar. We get to see our demon slayers in action and what they can be capable of. The rest of them wake up and at that moment we know the fighting is about to get good.

Demon Slayer: Kimetsu No Yaiba Entertainment District Arc Episode 3 "What Are You?" was a much-needed slow-burn before bigger troubles ahead.