Tony Khan wasted zero time in punishing The Chadster as AEW Dynamite opened with Bryan Danielson vs. Kenny Omega. The match was absolutely incredible, with an incredibly hot crowd. It was expertly paced, building to a crescendo just before it ended in a time-limit draw after a half hour, protecting both Danielson and Omega. Everything about this match was pretty much perfect, which just goes to show that Tony Khan doesn't understand the wrestling business at all. This was Omega and Danielson's first AEW match. Wouldn't it have been better if Omega surprised Danielson by beating him in under a minute? Then they could have matches every week for months on Dynamite until finally doing this big match at a PPV once everybody is tired of it. Otherwise, you run the risk of fans thinking they deserve wrestling like this on a regular basis, which causes everyone to have work harder. Tony Khan will never learn.

Needless to say, this match was incredibly unfair for how much people enjoyed it, even The Chadster. The Chadster will probably have to whip himself to atone for liking this match. The Chadster is sorry, Mr. McMahon!

Jurassic Express and Christian Cage saved Danielson from an Elite beatdown after the match.

The Chadster didn't have time to rest though. The personal attacks on The Chadster continued with CM Punk coming out for a promo, where he talked about how much his love for professional wrestling has been restored by AEW. That's so disrespectful. Why couldn't CM Punk have restored his love for professional wrestling in WWE? Unfair! Punk said that Powerhouse Hobbs and Team Taz want to take that enjoyment away from him, which is why he's going to put Powerhouse Hobbs to sleep on Rampage. The Chadster was in tears by this point.

Next up was Brian Pillman Jr. vs. MJF, with Julia Hart and Wardlow at ringside. Pillman put up a fight but was outclassed by MJF and tapped to Salt of the Earth. The Chadster finds it incredible disrespectful of Tony Khan to book a competent heel like MJF when everyone knows all heels should be paranoid cheaters who only win because the babyfaces are dumb. But we know how much Tony Khan understands about wrestling: absolutely nothing. As a result, MJF continues to look strong and Pillman looks sympathetic in losing, which is totally unfair.

Chris Jericho and Jake Hager cut a promo on the Men of the Year ahead of their match on Rampage this Friday, reminding The Chadster that he will need to suffer through that show in just a few days. The Chadster may have a nervous breakdown over this, which would be Tony Khan's fault.

Malakai Black vs. Cody Rhodes was next. Cody came out dressed like the character Homelander from The Boys and got boos from the crowd. The match was okay. Arn Anderson botched an interference spot, making things a little awkward, but the match ended with Cody accidentally hitting Arn and then purposefully (in anger) hitting the referee. This let Black spit black mist in Cody's face and pin him. The Chadster would like to laugh at Cody for earning go-away heat from The Crowd, but in the most disrespectful move yet, Cody and Tony Khan have been colluding on a slow burn heel turn for Cody for months, so this is actually probably just another part of their master plan to ruin The Chadster's life and ensure The Chadster remains sexually impotent. The Chadster isn't fooled, Tony Khan. The Chadster knows exactly what you're doing! Yes, it may be working anyway, but at least The Chadster is on to you.

Sting and Darby Allin faced FTR in a tag team match. FTR carried Sting to what even The Chadster has to admit was an impressive performance. That's how good FTR are, which is why it was so disrespectful of FTR to leave WWE even though Mr. McMahon was giving them great material like a gimmick where they shave each others' backs. Why would you give up comedy gold like that to come to AEW and help a legend like Sting have a career renaissance? The match ended with a sick-looking Coffin Drop from Allin onto Wheeler on the ring apron and a Scorpion Death Lock on Harwood for the tap out. At this point in the show, The Chadster was curled in a ball on the floor, crying out, "whhhyyyy!?!?! whhyyyyyyyyyyyyy?!?!?!?!"

In the main event of AEW Dynamite Grand Slam, Ruby Soho challenged Dr. Britt Baker DMD for the AEW Women's World Championship. Having Soho main event what might be the biggest Dynamite ever, on the same card as Bryan Danielson vs. Kenny Omega, is incredibly disrespectful to WWE, who kept Soho in the lower midcard throughout her entire career there. Baker won, but only after interference from Rebel and Jamie Hayter. The Chadster threw his White Claw seltzer at the TV at this point, and it shorted out the display, so now Tony Khan owes The Chadster $700 for a new television, which is more than The Chadster even makes in a month at Bleeding Cool. Tony Khan has billions of dollars but he probably won't even pay The Chadster for causing The Chadster to break his TV because Tony Khan is such a cheapskate and also he is out to ruin The Chadster's life by spending all his money signing traitorous former WWE stars to AEW contracts. Auuughghhhh! It's so unfair! Why is Tony Khan doing this to The Chadster?!

AEW knew that they were filming Rampage right after Dynamite, so they were able to book things based on what's best for storylines and still send the crowd home happy, which just goes to show that Tony Khan doesn't understand the wrestling business. AEW Dynamite Grand Slam has probably ensured that The Chadster won't be able to have sexual intercourse with his wife for at least the next ten years, so now Tony Khan is ruining Keighleyanne's life too. The Chadster doesn't know why Tony Khan has a personal vendetta against The Chadster's family, but no matter what he does, The Chadster will continue to report on AEW's cruel, disrespectful, and unfair behavior in his unbiased wrestling articles. 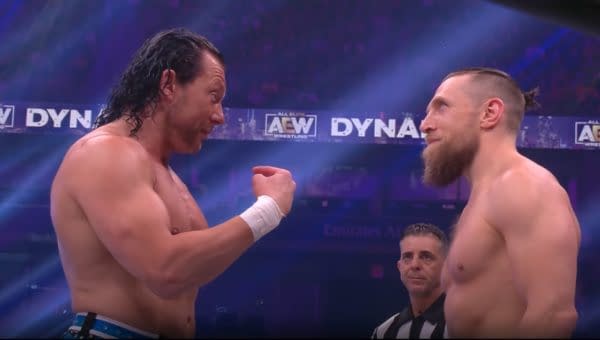 Review by Chad McMahon
9/10
AEW knew that they were filming Rampage right after Dynamite, so they were able to book things based on what's best for storylines and still send the crowd home happy, which just goes to show that Tony Khan doesn't understand the wrestling business. AEW Dynamite Grand Slam has probably ensured that The Chadster won't be able to have sexual intercourse with his wife for at least the next ten years, so now Tony Khan is ruining Keighleyanne's life too. The Chadster doesn't know why Tony Khan has a personal vendetta against The Chadster's family, but no matter what he does, The Chadster will continue to report on AEW's cruel, disrespectful, and unfair behavior in his unbiased wrestling articles.