Howdy, folks. The Chadster knows you've probably been missing The Chadster's daily Ratings Wars reports, but in the lastest insult from Bleeding Cool television editor Ray Flook, The Chadster has been told to only write those articles once per week unless something truly extraordinary happens. "Chad, all you do is complain about how unfair everything AEW does in those reports," he said. "It's really pathetic. We don't need five of those per week." Of course, that just goes to show how biased Ray Flook is against WWE and how he is in cahoots with Tony Khan to make The Chadster's life miserable. Luckily, The Chadster's journalistic integrity is unimpeachable, so The Chadster can put all of that aside and deliver this completely unbiased review of this week's AEW Rampage.

After Tony Khan tried to completely ruin The Chadster's life with AEW Grand Slam this week, you would think he would give The Chadster a break with a low-key episode of AEW Rampage this week. Unfortunately, Tony Khan doesn't know the meaning of the word mercy any more than he knows anything about the wrestling business, so Rampage this week opened with a huge match, Bryan Danielson vs. Nick Jackson. Bryan displayed his awesome technical wrestling skills during this match, a true insult to Vince McMahon, who taught Danielson everything he knows. But the match had a little bit of everything, with Danielson and Jackson also showing off their skills at striking and high-flying. The Chadster was nearly in tears by the end of this match because of how unfair it was to WWE. At one point,  Danielson reversed a 450 splash into a LaBell lock! Danielson won the match with the Cattle Mutilation.

A lot of people would probably be grateful to see such an incredible match on free television, but The Chadster was absolutely livid. Where is the respect for WWE, who paved the way for AEW to even exist? Augh man!

After the match, The Elite hit the ring, but Christian Cage and Jurassic Express came out to have Danielson's back and a brawl broke out. Kenny Omega ran away, leaving Jungle Boy to put Adam Cole in the Snare Trap. That brought Omega back in and right into a LaBell lock. Both men tapped out.

In a video promo, CM Punk talked about beating Will Hobbs and waiting for his next challenger.

Jade Cargill, Nyla Rose, and Thunder Rosa faced off in a triple threat match. Cargill is relatively inexperienced but obviously, AEW sees her as a massive future star, and she definitely has a great look. Rose is a very good powerhouse wrestler and a former AEW Women's Champion. And Thunder Rosa is a top-tier in-ring performer. All of this came together under triple threat rules to make all three women look great, which The Chadster personally found extremely unfair. Cargill won after beating Rosa with a chair after Rosa powerbombed Rose through a table from the ring apron, which accomplished putting Cargill over without damaging either Rose or Rosa. It was so disrespectful of AEW to put on a match like this on the same night as the WWE Draft, and by continuing to build up the AEW women's division, Tony Khan showed once again that he doesn't understand the wrestling business at all.

In a video promo, Sammy Guevara promoted his match with that traitor Bobby Fish on AEW Dynamite next week. Then commentary ran through the card for next week's AEW Dynamite Anniversary show and Rampage, a card which is so unfair when WWE has to be in a holding pattern for the next several weeks until after Crown Jewel because the changes to the roster from the draft won't take place until then. If Tony Khan had any respect for the wrestling business whatsoever he would do the right thing and slow down over the next few weeks so that WWE can catch up, but Tony Khan doesn't respect wrestling at all and his only goal in life is to make The Chadster miserable and sexually impotent, and that's what he's doing with these nonstop stacked cards.

With The Chadster's life ruined for the next week, all that was left was the main event. That traitor Mark Henry interviewed Orange Cassidy and Jack Evans with Matt Hardy and said his catchphrase.

The match was entertaining, which really cheesed The Chadster off. Can't Tony Khan ever give The Chadster a break?! The Hardy Family Office tried to interfere in the match but Cassidy's Best Friends and The Dark Order prevented it, which allowed Cassidy to hit the Orange Punch and get the pin.

With the HFO unable to hit the ring and save Evans, Orange Cassidy broke out the scissors and gave Jack Evans a new haircut. As Chuck Taylor used the clippers to buzz the top of Evans' head, Excalibur announced that Orange Cassidy and Big Money Matt Hardy will join the Casino Ladder Match on Dynamite next week. That's just rubbing it in, dang it! The show ended with a big hug between the Best Friends, the Dark Order, and -1. Auuughhh! That's so unfair!

Once again, Tony Khan personally targetted The Chadster and attacked him with logical booking, entertaining in-ring action, and compelling storylines, and The Chadster is really getting sick and tired of this. It seems like AEW can't miss lately, and that's so unfair and disrespectful to the wrestling business. Yet again, AEW's television was so good this week that there's no way The Chadster will be able to perform sexual intercourse with his wife, which means that Tony Khan is succeeding in not only ruining The Chadster's life, but ruining his marriage too. Auuughhh! 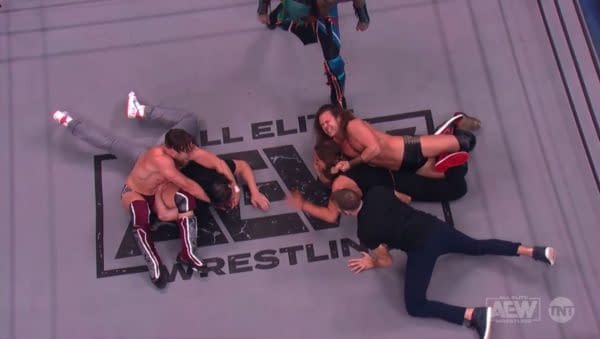 Review by Chad McMahon
8/10
Once again, Tony Khan personally targetted The Chadster and attacked him with logical booking, entertaining in-ring action, and compelling storylines, and The Chadster is really getting sick and tired of this. It seems like AEW can't miss lately, and that's so unfair and disrespectful to the wrestling business. Yet again, AEW's television was so good this week that there's no way The Chadster will be able to perform sexual intercourse with his wife, which means that Tony Khan is succeeding in not only ruining The Chadster's life, but ruining his marriage too. Auuughhh!

On a loaded episode of AEW Rampage, The Acclaimed unveiled a musical triumph. Plus: did Jurassic Express retain the tag team championships?

Despite tying WWE Raw in the ratings this week, AEW is never satisfied and plans to go forward with tonight's episode of AEW Rampage. Auughh man! So unfair!

Britt Baker helped her boyfriend Adam Cole beat up the Best Friends on AEW Dynamite last night. Plus: Sting and Darby Allin got revenge on The Acclaimed.

Brody King made his AEW Debut, joining the House of Black on AEW Dynamite. Plus: Serena Deeb took things to the next level with Hikaru Shida. Auughh man!

Lance Archer returned to AEW Dynamite last night and immediately kicked off a feud with Hangman Page. Plus: CM Punk vs. Wardlow! So unfair!