On Floribama Shore this week, Aimee explored her feelings, a pig beat a dog in an obstacle course, and somebody's nasty toe got sucked for money. Greetings, comrades! It is I, your El Presidente, here to bring your my thoughts on Floribabama Shore Season 4 Episode 14, titled "It Takes Toe to Tango," which aired this week on MTV. Here are my takeaways from the show.

A large part of the episode this week dealt with the fallout of last week's episode when a stressed-out Aimee tried to leave the vacation house. The reason stated at the time was that Aimee was sick of hearing "Aimee this, Aimee that," but speaking with the other roommates this episode, Aimee admitted that the true source of her stress is her relationship with Dylan, who Aimee stated has returned to drug use. At the start of the mid-season, Aimee said that she and Dylan are no longer together due to the drug problem, but Aimee's actions, including daily calls to Dylan and the exchange of "I love yous" on the phone indicate otherwise. A missed phone call in the last episode is what sparked the incident, and Aimee calmed down after finally speaking to Dylan this time. Dylan claimed to have not left his house, implying (but not saying) he is still sober.

Are these two still dating, or what? Had Dylan returned to drug use? Either way, he probably won't be very happy when he sees his drama aired out on national television, comrades! That would certainly drive me back to the meth pipe. Haw haw haw haw!

With tensions heating up between the house's dos mascotas, Nilsa, Aimee, and Candace brought pig PGP and dog Ravioli to a pet trainer. Despite PHP's propensity for defecating all over the house, the pig took to training quickly, completing an obstacle course while Ravioli failed to follow the simplest of commands. Everybody was forced to admit that pigs are actually smarter than dogs… which should have been clear from the start, comrades! The damn dog has been following the pig around and eating its poop since they arrived in Georgia.

Gus's resentment toward Jeremiah continued to grow this episode, as Gus attempted to rile Kirk and Codi against Jeremiah due to Jeremiah's desire to help the girls with their problems. First, Jeremiah gave both Ravioli and PGP a bath, which ended in Jeremiah vomiting after PHP crapped all over the shower. After that, as the girls brought the pets to training, rather than drinking with the boys, Jeremiah spent the entire time putting together a vanity for Nilsa. All the while, Gus and follower Codi referred to Jeremiah as "Captain Kiss-Ass." Will these tensions come to a head next week when Gus and Jeremiah share a birthday party, comrades?

The episode ended, as all good Floribama Shore episodes do, with a fistfight. The trouble started when Codi offered to pay Kirk $500 if Kirk would wrap his mouth around Gus's broken, nasty toe. Kirk was more than willing to take what he believed was easy money, but as the roommates continued to tease him about the toe-sucking afterward, Kirk became agitated, resulting in a fistfight with Gus. In the scuffle, Gus's already disgusting toenail was ripped off, and the episode ended with Codi offering more money if Kirk would suck on the toe again.

Comrades, nearly the exact same thing once happened at one of the annual dictators' retreats back in the day. Putin showed up with a gnarly injury to his finger that he claimed he got while wrestling a bear, though I am pretty sure he got it while cutting up beets to make some borsch. Anyway, Saddam Hussein was there, and everyone knows Saddam will do anything for a dinar — or he would, anyway — so we pooled our money and convinced him to suck on Putin's finger for a full minute. Everyone was laughing until Kim Jong Il pointed out the whole thing was in stark violation of Russia's very strict anti-LGBTQ laws. After that, everybody was threatening to have everybody else assassinated by their secret police and things got really heated, but we all decided the best thing to do was to blow off some steam by shooting microwave rays at a nearby hotel room where agents of the American CIA were trying to spy on us, and we all had a great laugh about that.

This episode of Floribama Shore had it all, comrades: oversharing of deeply personal drama, petty trash-talking, an animalistic struggle for dominance, also a struggle between the pig and the dog, and some good old-fashioned toe-sucking. Next week looks like it will only get better as the cast gets even more wasted for Gus and Jeremiah's birthdays. Until next time, my friends: socialism or death! 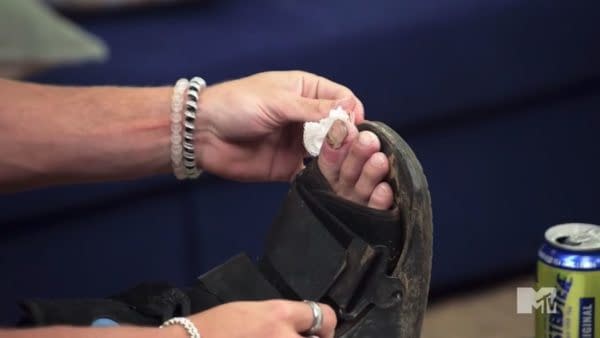 Review by El Presidente
7.5/10
This episode of Floribama Shore had it all, comrades: oversharing of deeply personal drama, petty trash-talking, an animalistic struggle for dominance, also a struggle between the pig and the dog, and some good old-fashioned toe-sucking. Next week looks like it will only get better as the cast gets even more wasted for Gus and Jeremiah's birthdays.

Jeff Hardy was sent home from WWE's house show tour after a strange performance during a match in Texas, multiple outlets have reported.

Floribama Shore Season 4 Episode 24: Can't We All Stop Getting Along?

Things have gotten too copacetic on MTV's Floribama Shore. Our roommates need to get back to drinking & fighting before the show's canceled.

Trish Stratus Set for WWE Return… at a House Show?!

Hall-of-Famer Trish Stratus will return to WWE to host a house show in Toronto on December 29th.

A production cel from the iconic classic cartoon The New Adventures of Winnie the Pooh hits auction with a bonus drawing included. Sponsored.

In the following preview for FOX's The Masked Singer, we take a look at the Group B finale; plus, an updated look at Season 6's masks & clues.

BoJack Horseman Creator Takes On Netflix Over Chappelle for Good Cause

Wrapping up my thoughts on Cowboy Bebop going from anime to Netflix's live-action series, a look at Ed, space battles, and fight scenes.