Only three episodes in on the fifth season of Dan Harmon and Justin Roiland's Rick and Morty, and the Adult Swim series has already covered thematic stomping grounds like environment & climate change, one's sense of self & personal identity, and… Beth and Jerry developing a pretty decent sex life? And it was sex that was the focus of this week's episode "Rickdependence Spray," directed by Erica Hayes and written by Nick Rutherford– a ten-ton, in-your-face, twisted "Afterschool Special" tour de force that didn't hide which hills it was planting its "sex flags" on (copyrighting and trademarking that for future use- maybe "Sex Flags Great Adventure" or a cool band name?). But then again, when you have giant killer sperm introduced before the end of your cold open, subtlety doesn't seem to be at the top of the menu. Okay, this is the point where we throw on the "MAJOR SPOILERS AHEAD!" sign and meet you after the spoiler image buffer for some thoughts on what went down.

Thanks to Hayes and Rutherford, we have yet another example of why you should never judge a book by its promo or cold open because it would've been easy to write off this episode as an American Pie take twisted up. But this is Rick and Morty. There's a reason the show's won two Emmys for its writing (with a whole slew of other eps that could've also snagged a statuette), and one of those is never doing what's expected. Morty's a 14-year-old-boy looking to get off- and like most 14-year-old boys, they usually find a way to pull it off (so to speak). So yeah, he got away with it for a whole week ("Morty, you dirty dog")- and then it all goes to hell is a wave madness involving killer sperm, the President of the United States, Rick having a new kid, the rise & fall of Blazin', an Incest Baby of epic proportions, tons of mansplaining, and a whole ton more. In fact, the storyline itself would need its own post just to recap. But the message was as crystal clear as a bullhorn blast to the face.

For us to be healthy, we need to be open and honest about sex and our sexuality- and that means understanding that goes for everyone. Let your freak flag fly- and everyone else gets to let their's fly, too. Because once we start judging others for their kinks and turn-ons, start making people feel ashamed for what they like and what pleases them? Well, in the world of Rick and Morty? It's giant killer sperm. In the real world, repressing one's sexuality in the face of what society considers "normal" results in much more personal and painfully tragic results. So when I say that the episode wasn't subtle, it's one of the best compliments we could give it because what should be settled matters are still having to be debated way too often in 2021, with local and state governments still looking to legislate what's in people's pants and what's going on in their bedrooms (or living room, laundry room, garage, Target bathroom, etc.)

So let's take a deep dive into some bullet points from the episode to demonstrate why it worked so well:

Between Jessica, Planetina, and an adventure questioning one's identity and place in the universe, having Morty's sperm be the source for the near-destruction of the planet just feels like they're kicking him down the road to "Evil Morty." That said Morty has really grown over the past two seasons, evolving into something not quite a Morty and not quite a Rick. You know, now that I say that out loud? Uh-oh…

Mansplaining, taking credit for women's ideas, and dudes thinking they know more about women's bodies were on full display- from the government expert stealing Summer's plan before jumping ship permanently when he didn't have a follow-up, to the President of the United States stopping Beth from taking down the Incest Baby egg ("It's an election year"). If some guys still need help knowing which side of the conversation to be on, this episode might be the best way to get that across Afterschool Special-style.

Between the shame that Morty still feels about masturbating (paging Dr. Wong) and Blazin's concerns about his wife Kathy Ireland (yup) learning he was wearing her thing when he died, we see where repressing sexuality can take things. But to add to what we discussed earlier- and another reason why the episode worked for me- was that it also showed the other side of the equation. Being open and honest about who you are doesn't mean everyone's going to approve- and that's okay. That's their issue to deal with- not yours. If there was one common message that rang out by the time the end-credits scene wrapped (wow, that Incest Baby is disturbing), it was that if we were all just honest about who we are and gave everyone else that same respect instead of judging them or hiding them away? Shit might just start getting better- an honest yet hopeful message from a show that continues to surprise us.

Random Thoughts: Were we the only ones sorry to see Sticky leave? It was mind-blowing how quickly Blazin went from a cool "Snake Eyes" vibe to dead with just one bad sword throw. I'm not sure why but the fact that the head of sperm would be a Queen Sperm just feels right in a bee-like way. Dear future alien invaders: do not mess with Las Vegas- especially The Amazing Johnathan and Cirque du Soleil, because they don't play. I've never thought of the Grand Canyon as a vagina so this episode was the first time I learned that was a thing. Still not vibing it. 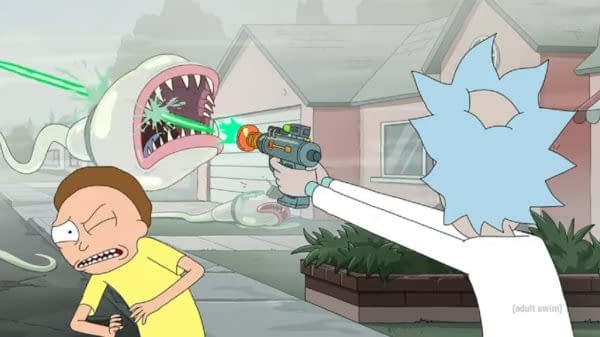 Review by Ray Flook
8/10
Only three episodes in on the fifth season of Dan Harmon and Justin Roiland's Rick and Morty, and the Adult Swim series has already covered thematic stomping grounds like environment & climate change, one's sense of self & personal identity, and... Beth and Jerry developing a pretty decent sex life? And it was sex that was the focus of this week's episode "Rickdependence Spray," directed by Erica Hayes and written by Nick Rutherford- a ten-ton, in-your-face, twisted "Afterschool Special" tour de force that didn't hide which hills it was planting its "sex flags" on.
Credits
Network/Streaming Service
Adult Swim/HBO Max

Set to premiere in 2022, Netflix's Stranger Things released a new Season 4 teaser taking us into a new location- Creel House.

In today's BCTV Daily Dispatch: Night Court gets a series order, Doctor Who gets a showrunner, Cowboy Bebop gets an official poster & more!

Who did Vinny kiss first on the second episode of Double Shot at Love Season 3? And which two girls got eliminated first?