The second season of Saved by the Bell on Peacock picks up where it left off on season one when the pandemic abruptly halts the school year where Douglas High students Daisy (Haskiri Velazquez), Aisha (Alycia Pascual-Pena), and Devante (Dexter Darden) embraced their new home at Bayside High. While there was a movement by the affluent parents to re-open Douglas High, California Governor Zack Morris (Mark-Paul Gosselaar) stepped in and allowed him to stay. As we learned at the season two premiere "The Last Year Dance", it cost him re-election…you know, for the convenience of the plot.

We also see how the students dealt with the pandemic with masks and Zoom calls and all. As Bayside opens back up, we see Aisha and Daisy going back to anticipate what to look forward to in their junior year. Slater (Mario Lopez) directs school traffic and bumps into "Preppy", who opens up about how his decision cost him before Zack asks Slater if he'll be at The Max later for an ominous meeting, but Slater's hesitant. Guess without the need to work, we'll see Gosselaar's Zack act more as "parent" this season rather than scheming towards his next plan. Meanwhile, Jessie (Elizabeth Berkley) is experiencing the fallout of trying to cope with her pending divorce opening up to the somewhat immature Slater, who still can't properly communicate his feelings to her.

Principal Toddman (John Michael Higgins) announced that the school spirit competition was on,  reinvigorating their rivalry with Valley High that we're expecting will become a recurring theme for the season. We also get the seeds of upcoming arcs for the other major characters like Lexi (Josie Totah), Aisha, Devante, Mac (Mitchell Hoog), and Jamie (Belmont Cameli). The way they portray Lexi about her relationship with Jamie and intimacy issues I feel will probably drag a bit from overthought clichés not to mention the random interruptions from Spencer (Abraham Rodriguez) that remind me of Stephen Stucker's bits from Airplane! as a scene chewer. Maybe it's because I grew up on the original series, but I'm thankful they're going to balance the adults more as much as they are the new cast.

The last scene is the series' tribute to Dustin Diamond where the core cast minus Dennis Haskins, who played Richard Belding, join at The Max to reminisce and pay respects to Screech (even bringing in a surprise cameo from the past). It was nice for what it was, but as I said before, they could have done far more and the character was deserving of it. Directed by Daniella Eisman, the show picks up where it left off storywise and the ending was a touching sendoff for one of their own. Saved by the Bell is currently on Peacock. 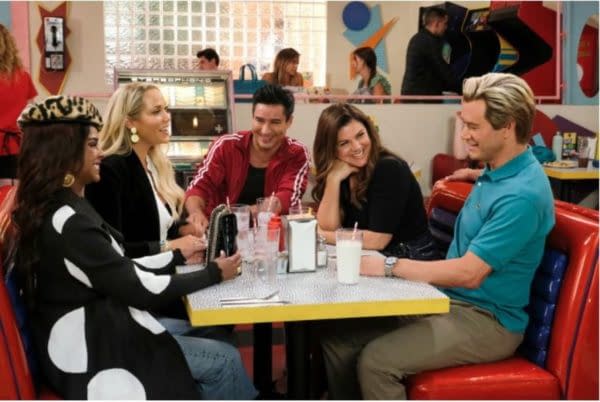 Review by Tom Chang
8/10
The season two premiere of Peacock's Saved by the Bell picks up where it left off, keeping the youthful energy and sass intact. It also looks like the series will look to balance embracing its past more with its adult cast, including more of Mark-Paul Gosselaar's Zack and a personal impasse for Elizabeth Berkley's Jessie.
Credits
Director
Daniella Eisman