The season two premiere of Star Trek: Picard "The Star Gazer" (alluding to the title character's pre-Enterprise ship) is a complete 180 from the disillusioned, broken down setting of its initial series premiere. This time around, we have our title character Jean-Luc Picard (Patrick Stewart) firmly back into the fold for Starfleet while his friends and colleagues found their own paths to continue on since the events of the season one finale. Starting off the episode we see the admiral tending to his vineyard in France and also tending to his duties delivering a speech for the graduating cadet class that includes its first Romulan in Elnor (Evan Evagora). Just to be on the safe side, we're throwing on the "MAJOR SPOILERS AHEAD" sign just in case we stumble into any of those areas (you can never be too careful)…

Re-establishing the characters, we see Picard still struggling on certain fronts as he's been complacent with routine, which wasn't so much a problem during his time in The Next Generation when the plot dictated it. I can look the other way because obviously you still need to have your lead to have some flaw or quirk for him to work on. I did appreciate they elevated Orla Brady to the main cast and gave Laris a more personal arc as it relates to the main character.

We also see Dr. Agnes Jurati (Alison Pill), Raffi Musiker (Michelle Hurd), and Cristóbal Rios (Santiago Cabrera) setting more into their Starfleet roles while Seven (Jeri Ryan) continued her role taking out pirates as a Fenris Ranger. Isa Briones' Soji tries to become an ambassador for her synthkind raising awareness to others listening. All paths do eventually converge at the conclusion of the episode and it never drags. Much is done to re-establish each primary character, especially Stewart's Picard with the return of Whoopi Goldberg's Guinan, who delivers her signature heart-to-heart offering her words of wisdom TNG fans were long accustomed to since the series' original run.

Directed by Doug Aarniokoski and written by Akiva Goldsman and Terry Matalas, the pacing is consistent throughout the episode from start to the surprise finish. Nothing is wasted and there's a fresh start now with the Borg and Q (John de Lancie). While I'm not looking to get my hopes up too high only one episode in, the second season opener was a celebration of what the franchise can still be instead of a time of mourning what came before. Star Trek: Picard streams Thursdays on Paramount+. 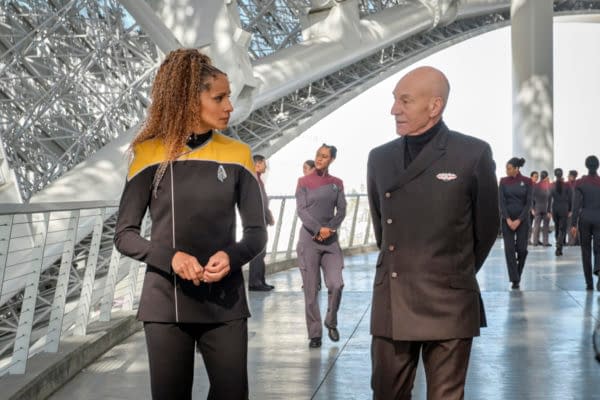 Review by Tom Chang
9/10
Paramount+'s Star Trek: Picard season two premiere "The Star Gazer" is about as close to traditional TNG as can be with everything falling into place early, without much time spent retreading the past. Everyone in the cast has equal input into the action and no one is wasted, especially guest stars Whoopi Goldberg and John de Lancie, both recreating their classic TNG magic with friend & co-star Patrick Stewart once again.
Credits
Director
Doug Aarniokoski

Have we seen the last of William Regal in AEW, and is he heading back to WWE to work again with Triple H in the very near future?

MJF's promo on AEW Dynamite was so pleasantly anti-AEW, it nearly cured The Chadster of sexual impotence. Nearly. The Chadster was so close!

Teen Wolf: The Movie: "The Pack Is Back" in Paramount+ Key Art Poster

Premiering on January 26, 2023, here's hoping that Paramount+'s Teen Wolf: The Movie is at least half as excellent as the poster released.

Stranger Things 5: Harbour Knows "Everything" But Duffers Might Differ

David Harbour says he knows "everything" about Stranger Things 5 (but the Duffers may differ); Conan the Barbarian impacted Season 4.