That Dirty Black Bag belongs to a grizzled bounty hunter named Red Bill (Douglas Booth). It's full of the heads of the meanest, nastiest outlaws he killed because "a head weighs less than a body". Red Bill is on the path for revenge, hunting for a man who murdered someone close to him. He arrives in a dying, thirsty town called Greenvale and immediately pisses off the corrupt local sheriff (Dominic Cooper), who has stolen a chunk of Federal cash and is willing to kill as many people as possible to cover it up. The local land baron Mr. Thompson (Patterson Joseph) is trying to starve out honest farmer Steve (Christian Cooke) so he can finally get his land to dig for gold. Steve has a tortured romance with local madam Eve (Niv Sultan) who has dreams of saving the nearly dead town with fair prices for water. Lots of people are shot and maimed. Hilarity ensues.

That Dirty Black Bag dropped its pilot episode with virtually no fanfare on AMC+ this week, a pastiche or update of the Spaghetti Western as a new TV series that seems to just spin its wheels. The show fails to ask that big question: Why should we care? It has all the tropes of the Spaghetti Western – gory violence, an overall cynicism about the human condition, villainous landowners pushing out farmers, desert frontier locations (usually Spain rather than any actual US location), a slightly weird antihero, corrupt sheriffs. This is really a TV show that's cosplaying as a Spaghetti Western. It has a bigger budget than most of the original movies in the 1960s, but it lacks its substance.

The movies may not always have been good, but they were overtly political. Their screenwriters and directors were card-carrying Italian Marxists and Communists and turned the plots into allegories of anti-capitalist class warfare between rich landowners and corrupt government officials against the people and revolutionaries. They were European commentaries on protests against the Vietnam War and calls for overthrowing Capitalism. That Dirty Black Bag pays lip service to corruption and greed but to no great effect. It's all an excuse for a bunch of mostly British actors to wear cowboy hats and fire pistols.

In 2022, a lot of old movies haven't aged well, including Spaghetti Westerns, alas. Their lack of authenticity is even more glaring than ever. That Dirty Black Bag is all "pose" without a reason to exist. There's no real sense of stakes when all the shootings and killings are gratuitous affectations. So this person dies and it's supposed to be awful. So what? We've seen it all before. Its production values, understanding of the film lexicon of Spaghetti Westerns – the widescreen vistas, the extreme close-ups of gritty faces, the occasional trips into Gothic horror – are all solid, but it doesn't really have anything to say. When everyone is a jerk who's either going to get killed or not for no great reason, who cares? You know what kind of show this is when Aiden Gillen, who played Littlefinger in Game of Thrones, shows up as a creepy goat herd who's really an early frontier serial killer. It's pulp storytelling that's all dressed up with nowhere to go. Even Sergio Leone, whose "Dollars Trilogy" launched the genre, hated them. If he was the father of the whole genre, "how many sons of bitches have I spawned?" he lamented. That Dirty Black Bag is really filled with just hot air.

That Dirty Black Bag is streaming on AMC+. 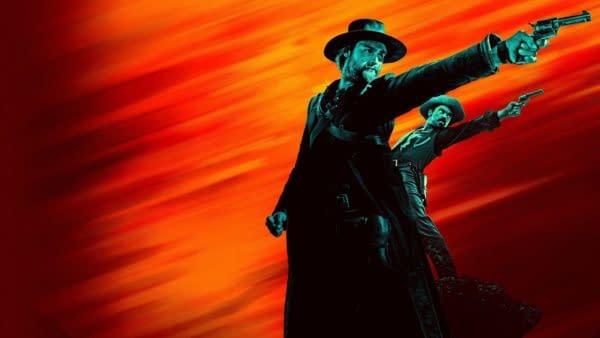 The Sandman Episode 5: How "24/7" Changed From Comics To Screen

The fifth episode of The Sandman offered a more nuanced take on the original comic issue it adapts, which was part of the 1980s horror wave.

The Sandman E04: How "A Hope in Hell" Changed From Comics to Screen

The Sandman Episode 4 "A Hope in Hell" remains faithful to the heart of the original comic while making changes that improve it in many ways.

Set to premiere with a "clarifying" new title this October, HBO Max released a teaser for Pennyworth: The Origin of Batman’s Butler (yup).

The Lord of the Rings: TROP Spotlights Morfydd Clark's Galadriel

Set to premiere on September 2nd, The Lord of the Rings: The Rings of Power released a mini-teaser spotlighting Morfydd Clark's Galadriel.

She-Hulk star Mark Linn-Baker is ready and willing should an opportunity arise to revisit Larry Appleton for a Perfect Strangers reunion.

Motherland: Fort Salem S03E09 Preview: A Calm Before The Storm

With the series returning tonight with its penultimate episode, here's a look at the images & previews for Freeform's Motherland: Fort Salem.