HBO's The Baby takes us back years and years ago for an origin story on the child itself and his connection to Mrs. Eaves' heartbreaking past with the mother. Fair warning ahead of time, plenty of spoilers for the episode will be discussed after the image break…

This episode of The Baby starts off with a great switch from what can be assumed to be the inside of someone, or inside of their womb, to a woman opening the oven to take out a finished roast. The news of inevitable death of a father shakes the evening meal conversation of two women and their male partners (brothers to one another) as the father delivered the bad news. Seeing a younger Mrs. Eaves on the other end of the phone line talking with one of the women, Helen, a stronger and more intimate bond can be sensed.

The expectations of heteronormativity plague Helen and her opposite sex marriage as she desires the comfort of Mrs. Eaves instead. The theme stuck in real life and in fiction of straight couples often thinking having a baby solves things is present and important in this episode of The Baby. Mrs. Eaves and Helen received some backlash from fellow queer friends as the topic of Helen's husband and potential futures comes up.

Helen ends up finding out that her sexual orientation unfairly prohibits her from working at her job and the potential of pregnancy heightens a lot of hidden fears she previously had. Mrs. Eaves ends up finding out out the pregnancy and works to help Helen along with things with an what can be assumed a scheduled abortion but it gets interrupted by her ex. You can feel the absolute emotional, mental, and physical pain and anguish coming from Helen through the screen as she's trapped back under her husband's control.

Watching this episode and seeing the full impact and origin of The Baby's story as Helen is trapped by the disgusting expectations of motherhood and society was beyond impactful. The scene where she lies on the bed with empty expression as her husband and his father sit down with the child and express eerie amounts of joy was one of the most upsetting yet important scenes in television right now. It's the genuine fear of so many women, especially right now, and this episode may end up being one of the best for the limited series.

The Baby took a unique turn into developing the origin and background of Mrs. Eaves, the child, and the trauma of forced motherhood. This episode was exactly necessary not only for the plot of the limited series, but also for society's view of female bodies and those with uteruses as forced incubators.

The Baby Episode 5 "The Baby" 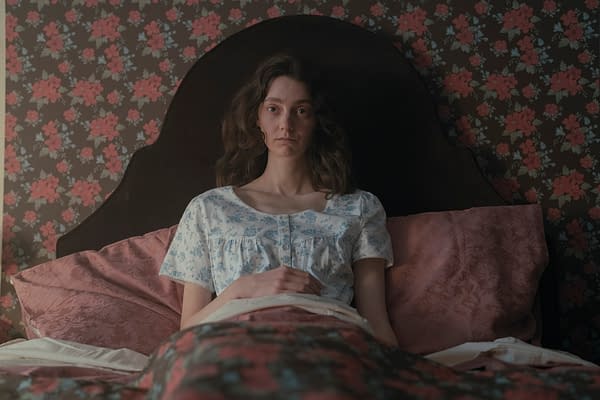 Review by Brittney Bender
10/10
HBO's The Baby Episode 5 "The Baby" is an outstanding portrayal of forced motherhood, the control of reproductive rights, and the plight of not only patriarchal standards placed on society but also on queer relationships. A chilling yet insightful story, this episode gives plenty of background into formerly mysterious characters such as the mother, the child, and Mrs. Eaves.
Credits
Network
HBO
Director
Faraz Shariat