If there's one thing the "Star Trek" franchise and Hulu's The Orville: New Horizons have proven time & again is their ability to use futuristic sci-fi to reflect modern, relevant societal issues. While it's clearly a pure coincidence that "Gently Falling Rain" is streaming at the same time as the January 6th Committee Hearings exploring the attempted insurrection at the US Capitol, the parallels are difficult to ignore. The episode focuses on the potential peace between the Planetary Union and their one-time mortal enemies, the Krill. From this point forward, consider this your minor spoilers warning for our look at

Given the importance of the episode, we see the major players involved with Victor Garber's Admiral Halsey and Ted Danson's Admiral Perry. Introduced is Bruce Boxleitner playing President Alcuzan of the Planetary Union. To help broker the deal, Halsey along with the President requests Capt. Ed Mercer (Seth MacFarlane) to accompany them on a potential historic treaty, which means both sides' very survival against the Kaylon. As the delegation approaches Krill space, we discover there's an election taking place with Krill Supreme Chancellor Korin (who brokered the peace deal) and opponent Teleya (Michaela McManus), Ed's flame who infiltrated the Planetary Union as a human only discovered to be a Krill spy.

Without divulging further spoilers, there are tons of twists and gut-wrenching turns that go about as disastrous as expected. I mean, why make it easy right? Personally, I have no interest in five-minute episodes but that's just me. We do get a number of memorable scenes between MacFarlane and McManus that help remind us why The Orville remains seriously top-notch sci-fi. And it sure doesn't hurt having "Star Trek" veterans like Brannon Braga and Andre Bormanis on board creatively. And just to be clear? That's not meant to say that The Orville is just "doing 'Trek'" because this series has more than defined itself as being its own franchise all throughout its run. I enjoyed "Gently Falling Rain" more than I expected, and is definitely in consideration for my favorite episode of the season. This is director Jon Cassar's third episode of the season and he has certainly developed the knack for balancing the more tense moments along with the more sentimental ones (an effort he executed well during his days working on FOX's Kiefer Sutherland-starring 24).

While action scenes are never lacking and nearly always executed effectively, it's the heart underneath and nuanced layering that makes "Gently Falling Rain" one of the best episodes The Orville has to offer and we're not even halfway through the third season yet. As far as current political overtones go, incorporating them within the Krill logistically makes sense because distrust and paranoia are often recurring themes in sci-fi. This week's episode of Hulu's The Orville not only sewed the potential seeds for the series' future but also afforded us the opportunity to reflect on the harsh realities of our all-too-real now. 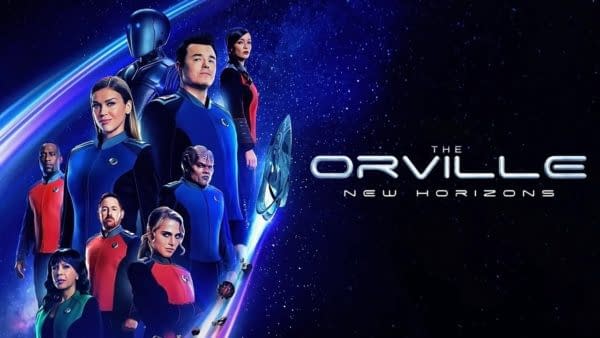 Review by Tom Chang
9/10
Creator & star Seth MacFarlane might have pulled off one of his best dramatic performances yet in Hulu's The Orville: New Horizons S03E04 "Gently Falling Rain". It helps to have just as an equally strong presence in Michaela McManus, whose character in Teleya takes a far more sinister turn as the Planetary Union tries to secure peace with the Krill. Director Jon Cassar and writers Brannon Braga and Andre Bormanis strike gold every which way, churning out peak sci-fi once again.
Credits
Director
Jon Cassar

Terry Crews and Olivia Munn shine in the series opener of AMC's Tales of the Walking Dead, but I couldn't shake those "backdoor pilot" vibes.

George RR Martin had high praise for Netflix's series adaptation of Neil Gaiman's The Sandman and offered a brief GOT spinoff series update.

Better Call Saul star Bob Odenkirk revealed the cast will be watching the finale together on Monday night, "and then we're going to cry."

A number of new & familiar faces get the She-Hulk: Attorney at Law spotlight treatment; Jen & Bruce deal with a serious traffic issue.