Night one of the WWE Draft took place on WWE Smackdown last night, kicking off a three-week lame-duck period for WWE that will prove even less interesting than usual. Was the show at least watchable? Well, that depends on how you watch it…

Roman Reigns and Paul Heyman came to the ring as WWE reminded everyone of the terrible ending to Extreme Rules with a replay. Pat McAfee made the weak case that because the match had "no rules," people can't complain about the ending.

Reigns and Heyman got to cutting their usual promo until Brock Lesnar interrupted. Heyman called Reigns "The Suplexorcist." They can't all be winners, Paul. Lesnar chased off Reigns then gave F5s to the Usos when they came out to intervene.

Charlotte Flair bragged about being picked in the first round of the draft.

Drew McIntyre cut a promo about how excited he is to bore the Smackdown audience with his tired act instead of the Raw audience for the foreseeable future.

Edge came out to answer the challenge of Seth Rollins. Edge says he was on the very first episode of Smackdown, making him look old and making me feel even older since I can remember watching that show what feels like a lifetime ago. Edge cut a promo on Rollins, who appeared on the Titantron to complain about that promo. Rollins was at Edge's house, which is a pretty god damn nice house I have to say. Rollins let himself in, rustled around the fridge, and drank some orange juice out of the bottle. He insulted some of Edge's daughters' artwork that was hanging on the wall. Edge called Beth Phoenix, who was luckily out grocery shopping, and told her to go to her brother's house.

Carmella and liv Morgan came out for a "match," but instead, Carmella rolled out of the ring and had some people put a silver mask on her face, got back in, and gave Morgan an X-Factor. That was it.

The New Day and the Street Profits teamed up to take on The Dirty Dawks and Alpha Academy in a meaningless eight-man tag team match. Roode ate the pin in this one.

Brock Lesnar chased off Jeff Hardy from an interview with Kayla Braxton. Lesnar had a public announcement: he thanked Paul Heyman for making Lesnar a free agent, which means Lesnar can do whatever he wants to do. Pretty sure he could do that anyway.

In the locker room, Reigns asked Heyman if it's true that he's Lesnar's friend. Roman wanted to know if Heyman is Reigns' friend too and whether he's going to make sure The Usos stay on Smackdown. Heyman said that will probably happen on Raw. Reigns told Heyman to go to Raw and make sure it does. He told The Usos to go too and to leave Heyman for dead if they're not.

Bianca Belair faced Sasha Banks with Becky Lynch on commentary. They had a decent match for ten minutes and then Becky got involved to help Sasha win with a rollup. Charlotte attacked Banks and Belair after the match and then faced down Becky, title to title, to end the show.

I used to watch Raw and Smackdown live for many many years. I still remember when you had to watch it live for fear of missing something exciting happening. Nowadays, pretty much the only thing you can guarantee about Raw and Smackdown is that nothing exciting is ever going to happen. But I will say this: if you have the ability to watch either of these shows at a faster speed, it makes them far more entertaining. For example, I have YouTube TV, which means I can choose the playback speed of the show from my DVR. So I usually watch Smackdown at 1.5x speed, which cuts it down to an hour and a half and makes the whole thing a lot more tolerable. Likewise with Raw, which becomes a two-hour show at 1.5X speed. And this illustrates WWE's primary problem: they just don't have enough creative juice to fill all of the TV time they have. It's not that they have no creative juice at all. They just don't have enough, and because of that, what they do have needs to be stretched out to fill more time, which makes everything they do feel sluggish and boring.

All of that said, this episode of Smackdown was particularly useless because WWE knows that the draw is The Draft, and not only do they not need to try with anything else because people are tuning in just to see those results, but furthermore, anything they do will be meaningless because the rosters will soon change. And since WWE decided the rosters will not change until after Crown Jewel, that means we can expect another three weeks of lame duck shows as well. Maybe I can watch them at 2.5x speed? 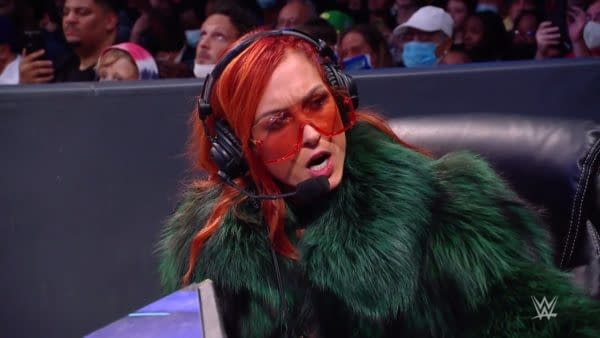 Review by Jude Terror
3/10
This episode of Smackdown was particularly useless because WWE knows that the draw is The Draft, and not only do they not need to try with anything else because people are tuning in just to see those results, but furthermore, anything they do will be meaningless because the rosters will soon change. And since WWE decided the rosters will not change until after Crown Jewel, that means we can expect another three weeks of lame duck shows as well.

Alexa Bliss tweeted in response to criticism of her psychological therapy angle on WWE Raw, telling disgruntled WWE fans to wait for things to play out.

It's not often someone names a comic after a town named after a Bleeding Cool writer, but here we are. A Town Called Terror launches in April from Steve Niles, Szymon Kudrański.

Jon Moxley Will Return to AEW Dynamite This Week

Guess who will not be appearing in the Royal Rumble later this month? Jon Moxley returns to AEW Dynamite this Wednesday!

With Saturday Night Live alum Will Forte (MacGruber) set to host (with Måneskin as the musical guest), here's a look at SNL's read-thru.

The Orville: Seth MacFarlane Shows Anne Winters How to Fly the Ship

The Orville star Anne Winters shared a video clip of her first day on the Season 3 set when Seth MacFarlane showed her how to "fly the ship."

Tales of the Walking Dead EP & showrunner Channing Powell took to Instagram to signal the start of filming on the anthology series.