WWE continued to coast down the road to SummerSlam on WWE Smackdown, bringing back a popular star this week and continuing to build championship matches for the big event.  But you didn't watch the show because you were too busy doing literally anything else, which was probably a wise decision on your part. We've got your back though. Here's everything you need to know.

WWE Smackdown shocked the world this week by delivering a genuinely funny, entertaining, and satisfying opening segment wherein John Cena cut a promo about how Roman Reigns rejected his challenge because he's scared to face him. Cena said Roman's claim that Cena hasn't changed his gimmick is stupid — would you want Stone Cold Steve Austin or The Rock to change their gimmicks? Cena, absence makes the heart grow fonder, but you're still no Austin or Rock. Anyway, Baron Corbin interrupted and they did some fun back-and-forth until Corbin got angry Cena only had a little bit of cash to donate and called him a Hollywood sellout. Cena said Corbin needed an Attitude Adjustment and so he gave him one.

Bianca Belair came out for an interview with Kayla Braxton about celebrating her 110 day anniversary as Smackdown Women's Champion. Carmella, assuming it's WWE so she must be owed fifteen more rematches, came out to issue a challenge. Zelina Vega, figuring she's the only other woman on Smackdown, came out to do the same. Belair accepted Vega's challenge. Vega and Carmella beat her down. Sasha Banks made the save, setting up a tag match for the main event.

Reginald, now going by "Reggie" and apparently no longer French, barely escaped a 24/7 title match (which now take place in the ring for some reason) with Shorty G, accompanied by Otis. Reginald's gimmick seems to require that he be tossed out of the ring and land on his feet in every single match, so look for his knees to be completely shot in six months or less.

Sonya Deville, Adam Pearce, Roman Reigns, Finn Balor, and Paul Heyman came to the ring for a SummerSlam contract signing. Reigns rightfully pointed out that Cena has been basically implying he's better than Balor and Balor isn't good enough to face Reigns for the Universal Championship, which Reigns noted is "a jerk think to say." He's right. Reigns signed the contract. Balor was about to when Baron Corbin attacked him. Corbin tried to sign the contract, but Cena attacked him. Cena signed the contract. Pearce and Deville were all like, "well, this looks legit to us," which is par for the course for a company that treats its wrestlers like employees but insists they're actually independent contractors. Cena vs. Reigns at SummerSlam is on! Did you ever have any doubt?

Big E, Cesaro, Shinsuke Nakamura, Apollo Crews, and the Dirty Dawgs killed a bunch of time with a six-man tag match. See all the comments I made above about the Mysterios and the Usos, and add out-of-tune guitar playing by Rick Boogs. Someone won, but I don't care who and it doesn't matter anyway.

Edge was supposed to cut a promo but the show was running short on time so Seth Rollins attacked him during a commercial break. WWE should have all the action take place during commercial breaks. The show would be a lot more entertaining.

Sasha Banks and Bianca Belair beat Carmella and Zelina Vega in a tag team match. Afterward, Sasha viciously turned on Belair, gave her the backstabber, and put her in the Banks Statement. Looks like these two will get to reprise their WrestleMania match in front of a crowd, and that's fair enough.

WWE Smackdown featured several segments this week that were entertaining. Cena/Corbin, the Reigns contract signing, and the return of Sasha were all good. The rest was filler. If Smackdown could solve its consistency problem, it could be a decent show. As it stands, it was only half bad, which is a win for WWE. 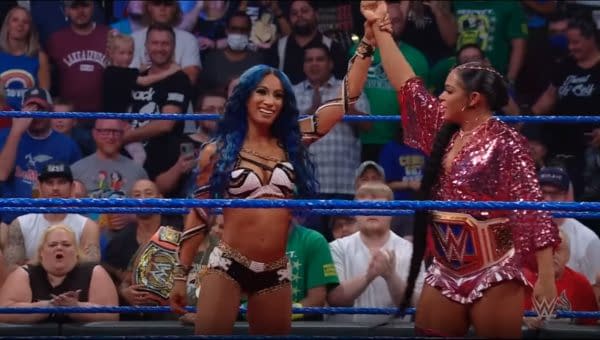 Review by Jude Terror
4.5/10
WWE Smackdown featured several segments this week that were entertaining. Cena/Corbin, the Reigns contract signing, and the return of Sasha were all good. The rest was filler. If Smackdown could solve its consistency problem, it could be a decent show. As it stands, it was only half bad, which is a win for WWE.

Steve Rogers learns what a voicemail is in this preview of United States of Captain America #4, but he still doesn't know how to check MySpace.

An American costumed vigilante of questionable mental state controlling the law enforcement of an entire continent? What could possibly go wrong in Batman the Detective #5?

Aging millennials rejoice and relive your youth with this Wednesday when Marvel publishes X-Men Onslaught Revelation #1. Read a preview here.

AEW has four hours of Grand Slam set for Dynamite and Rampage next week. Here's the full card as it currently stands for both shows.