Defenders time! That there were previous iterations of the universe before the Marvel Universe's existence was introduced by Stan Lee and Jack Kirby in late-sixties Thor.

It was quite a big idea, and gave an origin of Galactus, a survivor from the previous version of reality, Galen of Taa, cursed to play the role of this elemental force.

Half a century later, Jonathan Hickman and Mark Waid introduced the idea that Franklin Richards would play the same role for the next iteration of reality.

And would stand with Galactus at the end of time, ready to take over.

But it was Al Ewing who more recently codified the nature of the Marvel Universe in The Ultimates into a variety of realities that had occurred. That the Marvel Universe had begun anew after Secret Wars, the seventh iteration into the eighth, and how the neutronium compound stablised between the two as Iso-8. That Galactus' reality was the sixth.

And in Immortal Hulk showed a Hulk possessed by The One Below All taking the place of Franklin Richards and becoming the ultimate Destroyer Of All World in the Ninth iteration. It's his thing. And likely to conclude in Immortal Hulk #50 in October.

And with The Defenders #1 launching today from Al Ewing and Javier Rodriguez, with Doctor Strange creating a new team that includes The Masked Raider – another of Al Ewing's things… 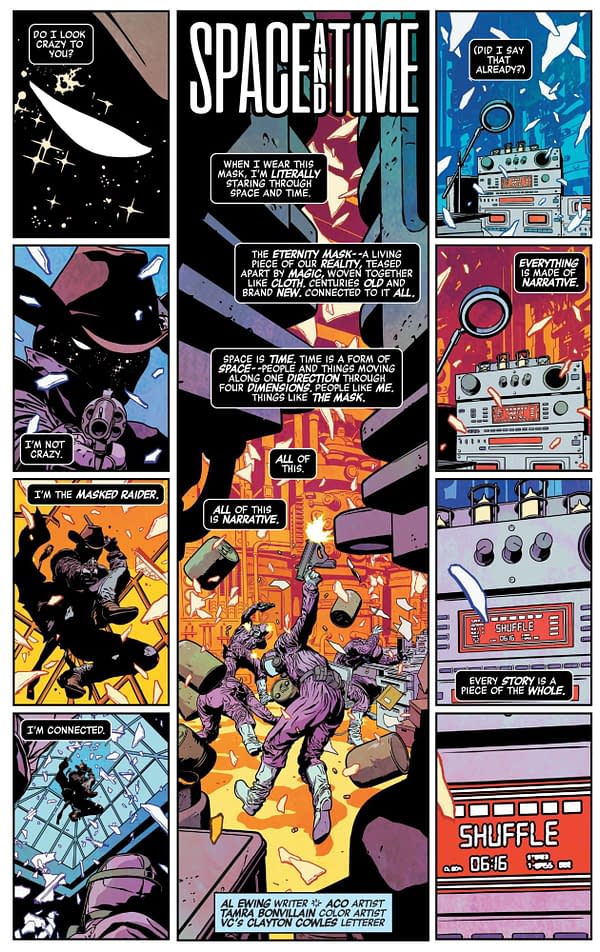 …as well as Marvel's first genderfluid character, Cloud of the early eighties Defenders…

…that's where the team is heading, not forward, but back, to the Sixth Iteration of reality and Galen's home planet of Taa. As they have to deal with Sise-Neg, a time-traveling 31st century sorcerer with plans on godhood created by Steve Englehart and Frank Brunner for a classic Doctor Strange story for Marvel Premiere back in 1974.

Size-Neg absorbed all the magical energy in the Marvel Universe during his quest to become God. Though originally intending to create a new universe in his own image, he ultimately decided to recreate the universe as it was with a Big Bang. Could he be what takes the Marvel Universe from its eight to its ninth iteration.

Or be behind the Creeping Plague that doomed the sixth? That popped up in recent Thor as well, as The Black Winter from Donny Cates and Olivier Coipel.

Will Al Ewing be collecting all these threads? Odds are good.

And with Rodriguez' own fluid style jumping from Mike Allred to Jack Kirby – because Kirby is what the entire sixth iteration, esecially the planet Taa, has always looked like.

DEFENDERS #1 (OF 5)
MARVEL COMICS
JUN210577
(W) Al Ewing (A/CA) Javier Rodriguez
SUPERSTARS AL EWING & JAVIER RODR GUEZ REUNITE FOR A COSMOS-COLLIDING JOURNEY!
When existence itself faces extraordinary threats, it needs an extraordinary defense! That's when you call…THE DEFENDERS!
DOCTOR STRANGE and the MASKED RAIDER take a non-team of Marvel's weirdest, wildest heroes on a mission that will uncover the hidden architecture of reality itself! This cosmos was not the first to exist…but if the DEFENDERS can't track Marvel's oldest villain through the deepest trenches of time – it might be the last!
Rated T+In Shops: Aug 11, 2021
SRP: $3.99

Did Mark Millar Do His Research For American Jesus Vol 3 On Facebook?

This is how the Image Comics solicitation for the new Netflix-licensed Millarworld comic book from Mark Millar and Peter Gross, American Jesus: Volume 3

Patrick Kindlon is the writer of comic books such as Frontiersman, Run The Dungeon, Antioch, Survival Fetish, There's Nothing There, and We Can Never Go

During the C2E2 Into the Massiveverse panel, writer Mat Groom announced that Inferno Girl Red, written by him, and drawn by Erica D’Urso and Igor Monti

James Tynion IV Is Only No 2 In Comics Substack, So He Tries Harder

In comic book writer James Tynion IV's most recent Substack newsletter, he looks back over a year of quitting DC Comics for Substack, and what he learned

Comic Book Creators On The Sandman Comic React To… Sandman

Sandman was always more than just Neil Gaiman. There were a whole host of comic creators, before and during the creation of the comic, who have seen their

Wonder Woman arrives to finish off Doctor Cizko in this preview of Wonder Woman #790, but she shouldn't have bothered... Etta Candy has already trashed the place.

Ms. Marvel teams up with Wolverine in this preview of Ms. Marvel & Wolverine #1. Is this the first step toward making her a mutant in the comics?

Leslie Charteris and the Mystery of Avon's The Saint #4, at Auction

Cover art for Avon's The Saint #4 has been the subject of debate in recent yrs, but style & circumstances still make Matt Baker a possibility