My store is coming up on its twelfth year in business this October. Even after all this time, I still learn and make changes in the store. I wrote about going to the Kansas City Planet Comicon in a previous column. I stopped at a comic store while in Kansas City, and I could not see the prices on their back issues behind the counter. I then had the same issue at Planet Comicon. The various vendors had a great selection of back issues, though, for each comic that I was interested in, I had to ask what the prices were. I felt awkward about it, as I did not want to waste their time. I also figured out that my customers were in the same position when looking at back issues that we have on our wall behind the counter. I even received some suggestions from people about what to do to make the prices easier to read. I had been leaning on buying labels that we could print prices on. Labels, of course, cost money. I also wanted to include basic information on what the back issue was about. Did it have a first appearance in it? What year was it from? We played around and came up with having the title, price, summary of the comic, and the year it came out on the statement.

As one can see, some of the comics still have their original price tags on them. The printouts have a much more noticeable price. Did this work? Heck, yes, it worked. Customer feedback has been very positive. Not only can they see the price they now know more about the comics on the wall. That Harley Quinn #1 variant with the Ed Benes cover is a Rodman Comics exclusive. Before, most people walking into the store just assumed it was another variant cover that had nothing to do with Rodman Comics.

For instance, if I did not research this Star Wars Tales of the Jedi issue #1 comic and had just seen it on a comic store's wall, I would think, oh wow, I wish I had that much artistic skill to make a cover like that. $34.99? It must be because it is the first issue. I would be wrong; it is Ulic Quel-Droma's first appearance. Who knows, Disney may use the character in one of their future streaming shows. Now, by reading the information, the odds are the customer has more knowledge to go on to make a purchase.

Did adding this help sell comics for us? Heck, yes. I never imagined doing something so simple would boost sales so much. It is more work but more work that leads to more sales, which I can always get behind. Our next step is, we need to get to work on doing the same thing for our graded comics that are on the wall. 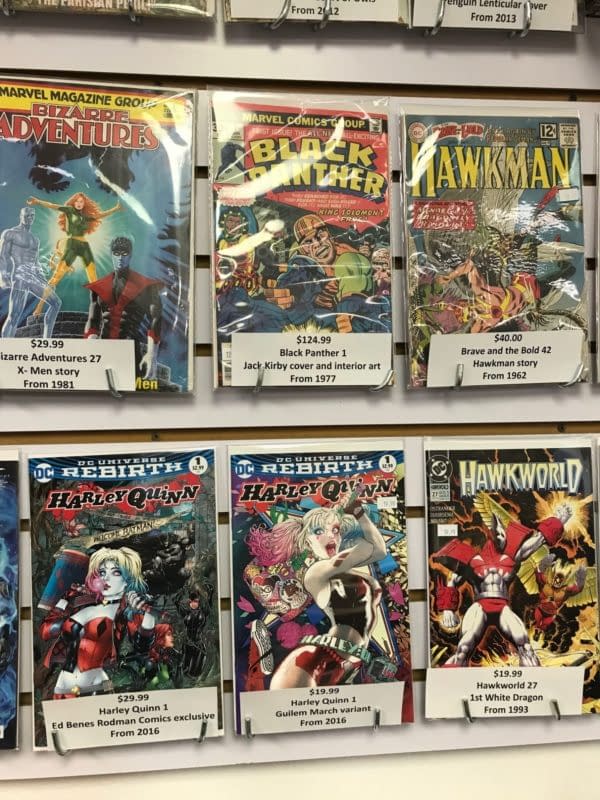 Review by Rod Lamberti
0/10
My store is coming up on its twelfth year in business this October. Even after all this time, I still learn and make changes in the store. I wrote about going to the Kansas City Planet Comicon in a previous column. I stopped at a comic store while in Kansas City, and I could not […]

After returning from a trip, my comic book store received a letter from Diamond Comics that ended in getting my bank and cops involved.

Comic Store In Your Future: People Are The Worst

Selling comics, cards, and other collectibles through a physical store means dealing with people. On Sundays, we are not even open, though we have been

Comic Store In Your Future: Make More Money With A Simple Idea

My store is coming up on its twelfth year in business this October. Even after all this time, I still learn and make changes in the store. I wrote about

Comic Store In Your Future: Rodman Comics Day on FCBD

Free Comic Book Day for 2022 is now in the record books. It was a different FCBD. Our previous sale day in March almost set a record for us. Then the

Comic Store In Your Future: 25 Hot Comics by Rodman Comics

With all the upcoming movies and other media comic-related upcoming releases, comics can be hot.  One comic may be in a store's dollar bin with no

A Comic Store In Your Future: A Trip to Planet Comicon

After a long time, comic conventions are back. With Covid protections lowered, people are feeling the need to get back to a more normal life. Last month,