Last year, DC Comics launched a new advertising/promotional feature/device for comic book stores. An LED frame to be hung in, or outside of, stores, that would come with a new topical insert every three months, promoting DC Comics product in an attractive fashion. The offered image changed every three months and retailers will had the option to subscribe to a year's worth of inserts. 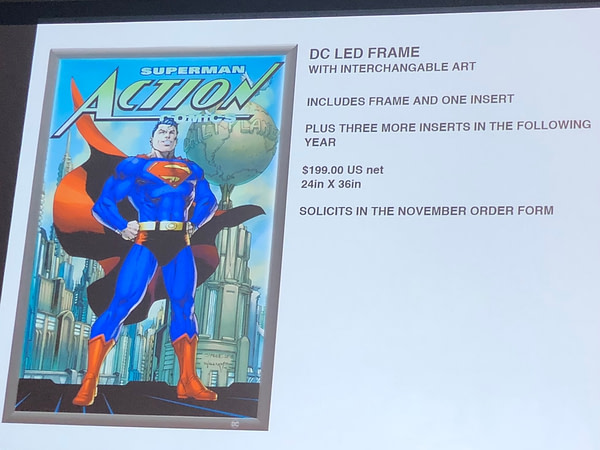 And yes that did mean retailers paying DC Comics for the honour of advertising DC Comics to their customers. But for some, it was an attractive, relatively cheap way of brightening the store and drawing attention, without being the same old thing decades later (how many stores still have a Batman sign from 1989). But this year, there was a bit of a blip. The price of the system was $199.99 and annual price of the inserts was $24.99, For some retailers, that was an acceptable cost. But in the second year? That $24.99 just jumped to $80. For people who had already invested in the system. Over 300% increase from one year to the next? There were some interesting conversations to be had between DC reps and retailers at ComicsPRO this year. But just before the show commenced, DC Comics messaged affected retailers to say that actually they would honour the original $24.99 price. For this year at least…