With star-spanning adventures and personal, emotional stakes, Green Lantern #7 does a great job tracking the fallout of the fall of Oa while introducing John Stewart to some distinctive surprises. There are developments big and small here, and each one is treated with equal gravitas and urgency.

First of all, this is thirty pages worth of comics — virtually unheard of in these challenging times. The two concurrent storylines (lost Green Lanterns in the Dark Sector under the command of long-time lantern John Stewart and interstellar politics under the command of Far Sector's Jo Muellin) each get their own section of the book.

Second of all, ignore the solicitations. What's described there is vaguely related to what's in the book but either intentionally obscures the details or was not written in conjunction with the script. It's a loose guidepost, at best.

Third of all, let's talk about Lonar. Lonar is the greatest, and with a dash of TNG's Q and a splash of Willie Wonka, he takes John Stewart on a trip across time and space to discover some things long before mankind even mastered fire. This whimsical, sardonic tone of this immortal warrior has great entertainment value and is well worth seeing. What happens here also points to a bigger story for John Stewart than any of us could have anticipated, which is an interesting choice.

Fourth, let's zoom in on Simon Baz, whose temper and often tempestuous emotional state gives us a whole other gear here as the tenuous relationship with the "hawkish" United Planets threatens everyone. The last page was a refreshing, surprising beat that really made this work connect.

When you look at the names behind it — writer Geoffrey Thorne, art from Tom Raney and Marco Santucci, finishes by Andy Owens, colors by Mike Atiyeh, letters by Rob Leigh — you'll have one of those forehead-slapping moments and say, "of course." Everybody here understands the assignment, and it's done at a high degree of skill and craft.

This new run has been very engaging, and this issue is another gem in that run. RATING: BUY.

Green Lantern #7
By Geoffrey Thorne, Tom Raney, Marco Santucci
Rescue the Lanterns! The mystery of the Dark Sectors begins to unravel. To rescue Kilowog and his squad of surviving Lanterns, John enters the realm of the Golden Centurions and their mysterious master, the Lightbringer! Meanwhile on Oa, Keli lies in a coma, while Jo's team closes in on those responsible for the destruction of the power battery, but a surprise arrival takes a key investigator off the board! 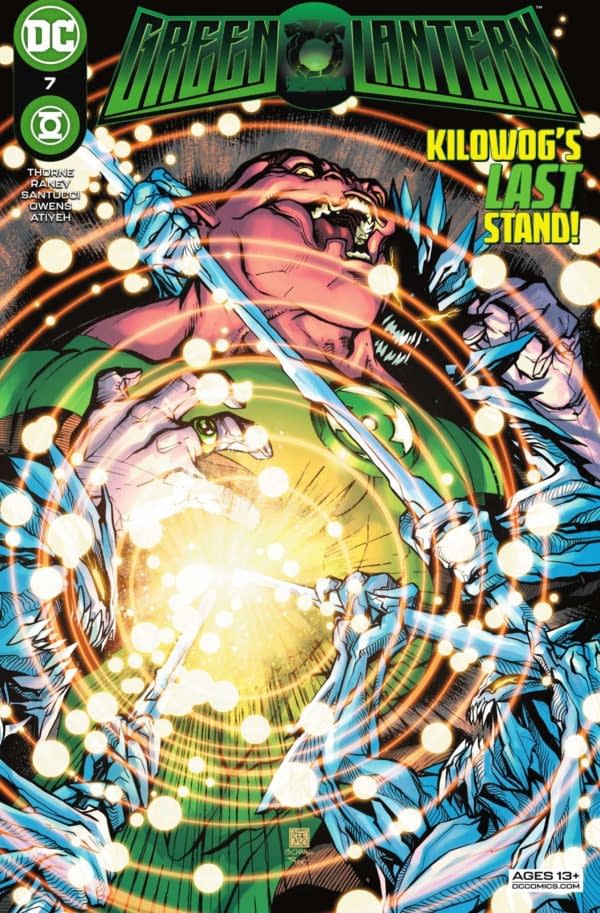 Review by Hannibal Tabu
8/10
Across the universe, Jo Muellin and John Stewart pick up the pieces of their average green band, but now the New Gods want to remix the track.
Credits
Editors
Andrew Marino, Mike Cotton

Justice League vs The Legion of Super-Heroes #6 Preview: Batman Down

Vandal Savage has Batman at his mercy in this preview of Justice League vs The Legion of Super-Heroes #6. Or so he thinks, anyway.

Spider-Man gets judged by his dead ex-girlfriend, Gwen Stacy, in this preview of Amazing Spider-Man #10, an AXE: Judgment Spray tie-in.