"Hard Case Crime Presents Good, Clean, Bare-Knuckled Storytelling…  This is an Exciting Line of Books". This quote from horror super-star writer Stephen King himself is blasted on the cover of this first issue of Gun Honey from Titans Comics due out this week. King is even quoted on the Diamond Comics order website listing for this issue, stating, "Charles Ardai is very smart and very cool fellow." If King says so, it has to be true, right?

This issue starts out by introducing us to the central character on a beach, in a bikini, of course, in Greece. She is a gun smuggler; even in a bikini, she can smuggle a gun. This is a good introductory issue as it sets up the cast and shows the background of our Gun Honey. We get to see her very own origin story, which is surprisingly intriguing, as the star of the book is more than a pretty face and more than just a gun smuggler. There is an actual thought-out story here.

Her gun smuggling leads to consequences, ones she currently feels no remorse for. But she is not an assassin, only a supplier of weapons. Her hardened background makes her unfeeling, showing emotion only towards her pet, which currently is the only thing she seems to actually care for. The art is solid and flows well along with the story. Ang Hor Kheng is a talented artist who is a good match for this comic as he draws the human form well with amazing detailed backgrounds. The issue ends with a decent cliffhanger to bring you back for Issue #2.

This issue sticks out in an overcrowded comic market; no superpowers, no magic, some cool, down-to-earth action. Most people will pick up this comic because of the covers—though there is an entertaining story behind the cover. The comic is worth the cover price and is interesting enough to lead to picking up the next issue. You can pick up Gun Honey on September 29th for the cover price of $3.99. 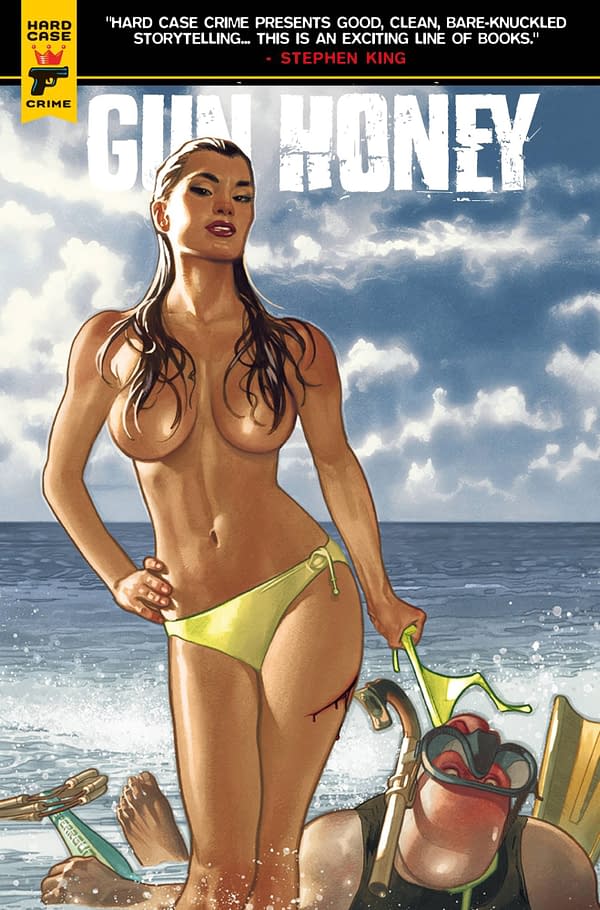 Review by Rod Lamberti
7/10
The weapon you need, where you need it, when you need it – she’ll get it! When a gun smuggled into a high-security prison leads to the escape of a brutal criminal, weapons smuggler Joanna Tan is enlisted by the U.S. government to find the man she set loose and bring him down!
Credits
Publisher
Titan Comics
Release Date
9/29/21
Writer
Charles Ardai
Artist
Ang Hor Kheng

Comic Store In Your Future: What To Be Thankful For?

Another Thanksgiving means another time to look back and reflect on what to be thankful for. The comic industry is still going. Sounds easy enough. Sadly,

Comic Store In Your Future: DC Returnability A Game Changer?

Once in a while, a possible game-changer happens. It was recently announced that DC is making all of its new releases returnable. All DC Comics Made

Comic Store In Your Future: Hot 25 Comics by Rodman Comics

Hot comics are still heavy in demand. New comic movies mean new interest in comic characters that they are based on. The comic back-issue market is

Comic Store In Your Future: Were Comics From The Past Better?

In the past days of my youth, as a kid, I took for granted what an impact comics would make on my life. The escapism, the wonderment, and the enjoyment

Learning should be never-ending. No one knows everything. Even after a decade of owning a store, I am still learning to better the business. I recently

After returning from a trip, my comic book store received a letter from Diamond Comics that ended in getting my bank and cops involved.

The Punisher Picks Up The Gun Again (Spoilers)

In July last year, Bleeding Cool scooped the news that Jason Aaron was to reinvent The Punisher for a new age, adding the headline story "Jesus Saiz and

What If Predator Was Human? All Against All, From Image Comics Today

All Against All spoiler time! You have to love a story about some kind of alien creatures interfering in each human life and twisting it one way or

What Did Mister Fantastic Do To Lose His Fortune? (FF Spoilers)

Today's Immortal X-Men #9 opens with a bit of a recap and a relook at the events of Marvel's AXE: Judgment Day event and how it will be affecting the

Artificial Intelligence & Writing- Where Do Crystal Dragons Come From?

Yesterday, an article on comic books and AI/artificial intelligence exploded on Bleeding Cool. But that was rather focused on how Artificial Intelligence