Today's Immortal X-Men #1 reveals that Mister Sinister may be getting all his Bar Sinister gossip from the future. You know, it's not entirely different from how I get some of mine. Youn know I had a TARDIS in my front yard at one point, right? But let's break down what we can from the Red Diamond gossip from this week's comics. 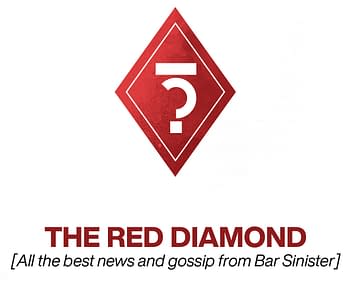 1. Scandal! Which certain young lady is keeping private company with Mister Sinister?
2. Does the fiery newcomer think that "Quiet Council" means "One must use silencers on all your automatic weapons"?
3. Writer's block is a terrible thing. Rejoice! The muse is going to strike someone who hasn't written a major work for over one hundred years…
4. The dress code this year at the gala is Huge Diplomatic Egg On Your Face. The Queen is most miffed…but at least she gets to get her revenge on a certain council member.
5. It's Judgment Day. Let's hope we're not being judged for our spelling choices. It's Judgement, you ruffians.
6. Is an island nation going to be destroyed? Maybe! But don't worry, it's not ours.
7. Which blue mutant is going to see red?
8. Acting like being immortal is a new thing is very gauche. Some of us have been rocking the look for a while, and trust me, we have had all manner of adventures.
9. Look on the bright side: The council chamber being white means it's easy to see where you have to mop up the bloodstains.
10. Finally! Someone who actually deserves it gets thrown in the pit. Good riddance.
11. Oh no.
12 Help. Just help me. It stretches on endless and cold. Infinity balloons and a scream is too big for my head. This is a hell of my own making. Hell is other people. Hell is also me.
13+. Everything is fine.

1) had better not be Kate Pryde, we had enough of that with Pete Wisdom, Kieron. Might 2) suggest that Firestar is joining the X-Men? 3) Is Mark Twain a mutant? 4) Has Sinister seen that someone turns up in the same Jumbo Carnation concoction as another? 5)… the writer is showing.

Does 6) mean the destruction of the United Kingdom Of Great Britain And Northern Ireland which pulled out of Krakoan diplomatic relations? 7 – pick between Nightcrawler, Mystique and The Beast. 8) More adventures of Mister Sinister and Selene to be revealed? 9) will we get another Trial Of Magneto? 10) 11) 12) and 13+) may have been foreshadowed by a Foreshadow Variant to Inferno #4…

…there's a point. How can Mister Sinister reset the timeline if he is in the Pit? Oh no indeed… but what crime? Making clones is clearly making more mutants after all. And shown could he have written the gossip unless he had the memories from a clone who had stored them?

IMMORTAL X-MEN #1
MARVEL COMICS
JAN220809
(W) Kieron Gillen (A) Lucas Werneck (CA) Mark Brooks
IN THE QUIET COUNCIL, NO ONE CAN HEAR YOU SCREAM! The Quiet Council rules the Krakoan age, for better… or worse. Now, shaken by INFERNO and X LIVES / X DEATHS OF WOLVERINE they strive to hold together, no matter how much they want to tear each other apart. Writer Kieron Gillen (UNCANNY X-MEN, ETERNALS, The Wicked + The Divine, Die) returns to the world of X with artist Lucas Werneck (TRIAL OF MAGNETO) to bring us all into the room where it happens. "It" being "the most powerful people on Earth deciding the fate of the whole planet." Prepare for sinister secrets to be revealed and learn that some secrets are more sinister than others… RATED T+In Shops: Mar 30, 2022 SRP: $5.99

What does a Flash do when he can't run fast enough in this preview of Flash #792? Drive, of course.