Possibly more than Squirrel Girl or the denizens of Equestria,  Nightwing #91 shows that Dick Grayson's most effective weapon might be the power of friendship. By leaning into the relationships he's built over the years, he showcases not only his own prowess but the effectiveness of force multiplication.

The titular hero has inherited a scary amount of money after the death of one of his father figures. In his civilian identity, he is using those funds to declare a de facto war on poverty in Blüdhaven. This has upset a lot of people, like metahuman crime boss Roland Desmond (Blockbuster), who rely on poverty to maintain their grip on power. Now Dick Grayson has a price on his head that'd make Han Solo blanche, so Nightwing and his amazing friends are working on a solution.

There's a lot to love about this Tom Taylor script, from the brilliance in Dick Grayson's detective work to the deftness at which he lovingly wields those closest to him (Oracle, Flash) as weapons to fight crime. Geraldo Borges steps in for Bruno Redondo, doing great stuff to show how super speed combat can happen and portraying personal moments as effectively as action scenes; Adriano Lucas and Wes Abbott provide adroit colors and letters.

The bigger picture — how Blüdhaven is changing with an active billionaire trying to fix things instead of, say, buying a social network — is on the back burner. While that's a shame, there's plenty of action and character work to keep readers intrigued. RATING: BUY.

Nightwing #91
By Tom Taylor, Geraldo Borges
Trying to save a city that's even more beyond saving than Gotham is no small task, and even someone like Nightwing needs a day off to relax with his best friend and to recharge — but when your best friend is Wally West, a.k.a. the Flash, a "recharge" might not end up being so relaxing! 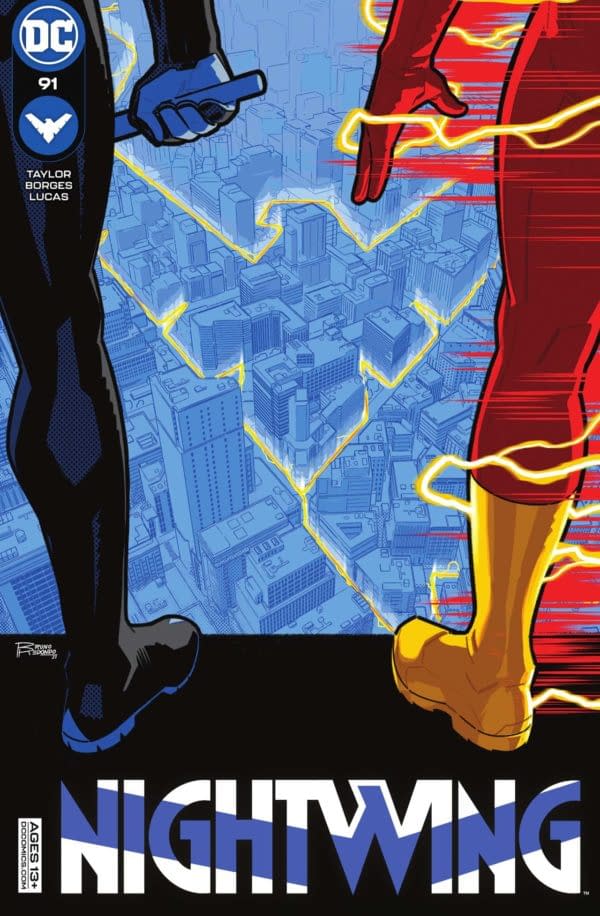 Review by Hannibal Tabu
8/10
Who’s going to Costa Rica? The Flash and his best pal Dick Grayson span continents to stop some of the world’s most dangerous killers.

Hellfate is a new comic book series by Philip Osbourne and Max Avo launching from Blood Moon Comics in their September 2022 solicits and solicitations.