Not All Robots is a play on the phrase "not all men" as we're in a dystopian thought experiment: what if machines took all the jobs from humans and both humans and robots are equally unhappy? What happens if the machines start killing people? Do they all want to kill all humans? Why no, not all of them! And the one that killed a few thousand humans just made a mistake, that's all! Humans and robots are starting to take sides as resentment and hostility start to boil. But what's it like for the working stiff robots stuck in dead-end jobs to support the ungrateful human families they're assigned to? Those are the robots and people who truly matter, but do the people and robots at the top care? Hell no! Things may not end well.

Not All Robots is AWA's funniest comic right now. Mark Russell has written a satire of toxic masculinity under late capitalism by substituting the robots for the resentful men in society who think they're under-appreciated and unloved. Russell is the premier satirist in mainstream comics right now. It's not like any other writer was vying for the position, but he has claimed the title with his recent body of work that includes The Flintstones, Wonder Twins, and Second Coming. His main skill is to have people speak and react in a terrible situation as though it was normal and to have robots act like smug, privileged men in power. There's the working stiff machine who hates its job and the family it lives with, despite the father being a total automaton groupie. The comedy comes from everyone treating this inherently absurd world they live in completely seriously. Mike Deodato Jr.'s hyper-realistic art sets the series above all other comedy comic series, lending it an unexpected weight by grounding it in the sense of reality. To have robots with no faces or facial expressions say the most absurd things gives the story a deadpan humour that sugarcoats the bitter pill Russell's script is having us swallow. The first two issues of Not All Robots set the stage for where the rest of the story is heading, and it invites us to laugh all the way to the end of the world.

Not All Robots #1 and #2 are now out from AWA Studios. 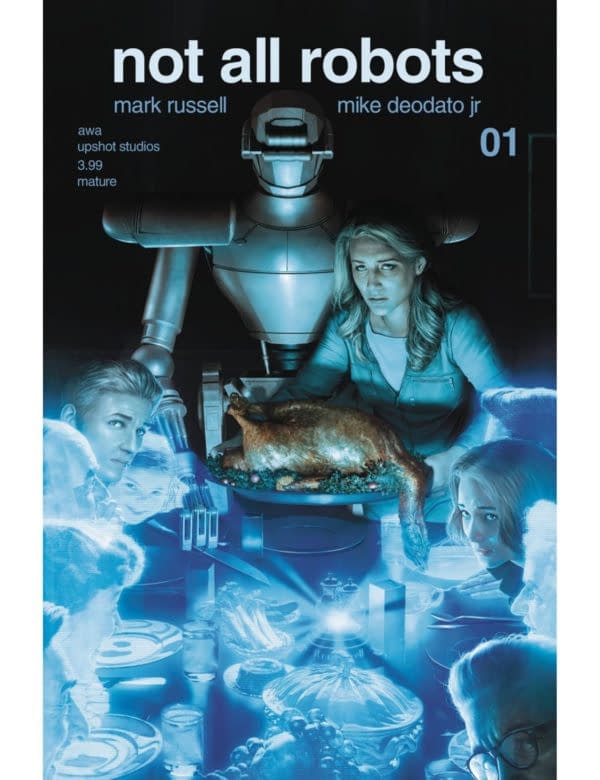 Did you know that the new Doctor Who showrunner Russell T. Davies revealed who the next Doctor is?! No, not really. But he did have some fun.

Doctor Who showrunner Russell T. Davies delivered a fiery, awe-inspiring speech about the importance of the LGBTQIA+ community showing unity as he

Squid Game just became the biggest show on Netflix, receiving 111 million views. How did this happen & what does it mean? Let's take a look.

Sony Pictures TV is interested in buying production company Bad Wolf, which is partnering with Russell T. Davies for Doctor Who Series 14.

BBC's Doctor Who star Colin Baker, who played the 6th Doctor, weighed in on the speculation that Olly Alexander would be the next Doctor.

Shazam #4 Preview: Shazadam Got a Makeover

Popular DC hero Shazadam makes a guest appearances in Shazam #4, but someting isn't quite the same. Check out a preview here.

Refrigerator Full Of Heads #1 Preview: Has No One Heard of a Freezer?

Refrigerator Full of Heads #1 is in stores on Tuesday from DC Comics, begging the question: why not put the heads in the freezer? They'd keep longer. Check out a preview here.