You might think you see shades of Nightmask or Dream Thief or Sleepwalker in Slumber #1, a debut issue that mixes a murder mystery with an otherworldly quest for vengeance. This clever combination of police procedural and science fiction thriller has a lot to like about it.

The New York Police Department has a problem: a set of murders called the Sleepwalker Killings threaten the neighborhood of Queens. Seven bodies are found ritually murdered with specific symbols painted in blood alongside a message: "I seek the dream eater." Seven people were found next to the bodies, people they did not know, weapon in hand, claiming they woke up to this gruesome scene.

Victim number seven had a business card in her purse for Stetson, a "dream healer." She uses an almost Ghostbusters/Weird Science level technology to literally enter the dreams of clients with weaponry and a pointy-eared cannibal colleague to hunt down the nightmares in people's minds and either convince them to stand down or end them forever.

The artwork by Vanessa Cardinali, Simon Robins, and Steve Wands goes between an almost Skottie Young, I Hate Fairyland vibe that shifts to the rough-hewn Dave Crosland Chew style of grim law enforcement investigation style of things. Stylistically, this might not work for every fan, but it adds a strangely manic whimsy to the work. All of these shifts wonderfully match the clear tone in Tyler Burton Smith's script, which clearly has something planned out and has developed this fictional environment well.

While this may not work out for everyone, there is a solid entertainment value here and some creative, interesting ideas at play. RATING: HONORABLE MENTION.

Slumber #1
By Tyler Burton Smith, Vanessa Cardinali
Stetson is a nightmare hunter. A dream detective. She runs a shoddy back-alley business where she helps clients sleep at night by entering their dreams and killing their nightmares. But Stetson's past comes back to haunt her when she tracks down a literal living nightmare – a serial killer that murders people in their sleep. SLUMBER is an ongoing series from the twisted minds of writer TYLER BURTON SMITH (Kung Fury,Child's Play) and rising-star artist VANESSA CARDINALI. 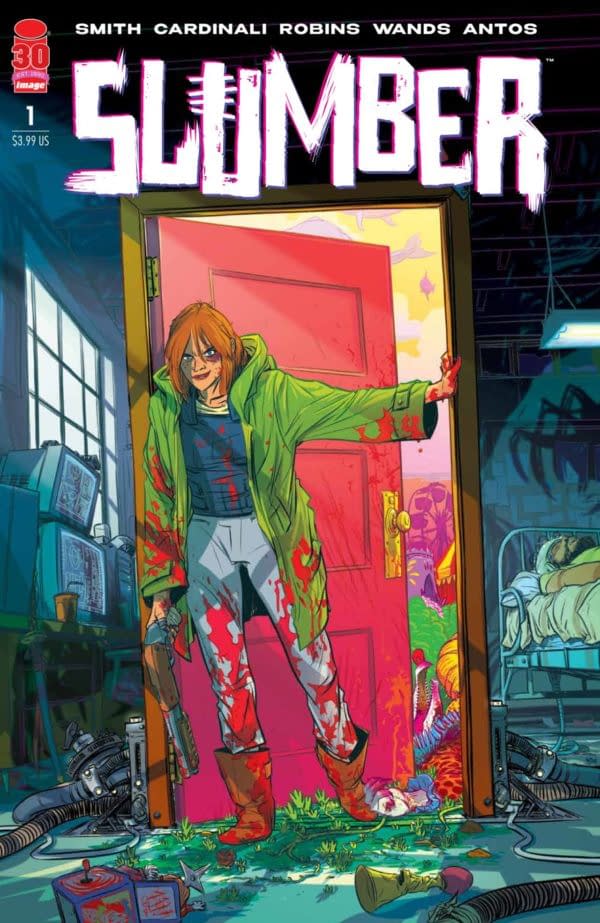 Review by Hannibal Tabu
7/10
Something from beyond the veil of sleep hungers for a woman with offbeat tech and a penchant for killing nightmares. Is it ready for her to be hunting it as well?
Credits
Editor
Heather Antos

Dole continues to shake the produce universe to its foundations with the latest Marvel crossover for Thor: Love and Thunder.