Home » Comics » Sorry, No Punchline in Harley Quinn And The Birds Of Prey #1

Last week, Bleeding Cool ran the fun idea that Punchline's actual first appearance could have been in Harley Quinn And The Birds Of Prey #1 by Jimmy Palmiotti and Amanda Conner. And all the speculators who had been hoarding copies of Batman #89 and Hell Arisen #3, or buying them up for $50 a pop, screamed. 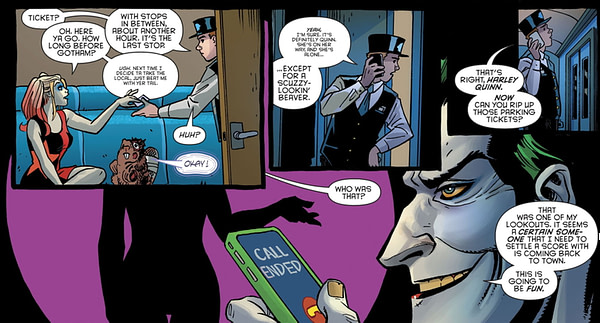 But not to worry, it seems that writer Jimmy Palmiotti has cleared up that it wasn't Punchline who appeared in silhouette – and we will discover who she is at a later date. And we already know…

Joker has a new sidekick in our Harley and the birds of Prey, but it is someone that is established already.

HARLEY QUINN & BIRDS OF PREY #1 (OF 4) (MR)
(W) Amanda Conner, Jimmy Palmiotti (A/CA) Amanda Conner
DC Black Label Prestige Plus 8.5" x 10.875"
The creative team that transformed Harley Quinn forever returns to shake up her world once more-and this time, the gloves are off!  Harley Quinn has avoided Gotham City ever since she broke up with The Joker and found a home, and a kind of family, in Coney Island. But when she gets an offer she can't refuse, she has no choice but to slip back into the city as quietly as she can, hoping to be gone before anyone – especially her ex – learns she's been there. But for Harley, "as quietly as she can" is plenty loud… and before she can say "Holee bounty hunters, Batman," The Joker's sicced every super-villain in the city on her pretty ombré head-and the only team tough enough (or crazy enough) to come to her defense is the Birds of Prey! The foul-mouthed, no-holds-barred sequel to one of DC's raciest runs is here! Get on board early, before we come to our senses!In Shops: Feb 12, 2020 SRP: $5.99

HARLEY QUINN & THE BIRDS OF PREY #2 (OF 4) (MR)
(W) Jimmy Palmiotti, Amanda Conner (A/CA) Amanda Conner
DC BLACK LABEL AGES 17+
Over the course of her illustrious and very high-class career, Harley's met pretty much every super-villain who ever worked in Gotham City. Some hate her. Some love her. But none of that's gonna matter once they see how many zeroes there are on the bounty The Joker's offering for her head! Sorry, Harley-it's just business. Your next of kin will understand, right? Meanwhile, Cassandra Cain finds herself in the unenviable position of being Harley Quinn's bodyguard…but this could be her opportunity to learn a little about, y'know, loosening up? If she's currently wound too tight, then just sit next to Auntie Harley…she's got more than her share of loose screws! 8.5"x 10.875"In Shops: Apr 08, 2020 SRP: $5.99