Bones and All is a fascinating exploration of the juxtaposition between a rather familiar story of people looking for love and acceptance with the bloody violence of cannibalism.

Director: Luca Guadagnino
Summary: Maren, a young woman, learns how to survive on the margins of society.

Bones And All: The Contrast Between Love And Gore

Bones and All is not a film where the cannibalism aspect of it is small and not a central part of the film. This isn't a love story that occasionally has bouts of bloody violence that seem to come out of nowhere and are so different from the rest of the film that it nearly feels like whiplash. The film takes that feeling of not belonging and trying to find not only your person in the romantic sense but your feeling of belonging when it comes to family and uses cannibalism as that lens to explore. However, the question as to why these people feel the need to eat others isn't really explored because it isn't the point. The why isn't going to help any of them in the long run because that why isn't going to bring any of them the satisfaction that finding your person is.

While the central story of Bones and All is the love story between Maren (Taylor Russell) and Lee (Timothée Chalamet), it's far from the only one. We meet Maren when she loses the only person she ever had in her life, her father has given up on her, and now she is searching for her birth mother. Maren does think that her mother might know something about her inclination toward human flesh, one that is getting stronger and harder to control as she gets older, but what Maren is really looking for is a parental figure in her life and someone to look out for her. It's a story that we have seen so many times, both in fiction and nonfiction, the same way we have seen the young love that blooms between Maren and Lee as well.

Director Luca Guadagnino also chooses not to linger on the violence of what is happening after it happens. When someone is getting hurt, killed, or eaten in some way, Guadagnino's camera is unflinching in the way it films it. That can be seen within the first few minutes of the movie, as we see Maren lose control of herself at a sleepover. However, while the film and the way that Guadagnino films these scenes are very aware of their horror, he also shoots the rest of the movie like they aren't happening. When Maren and Lee are falling in love and driving across the country trying to find Maren's mother, the film shifts, and it is shot like any other coming-of-age film. There are times the violence bleeds into the scenes that are shot like any other film.

That horror bleeding into scenes that seem more conventional is probably the most obvious in the scene that all of the marketing is focusing on. We see Lee confessing the sins that have been following him throughout the film. This is something we see in coming-of-age films; someone has done something they aren't proud of, and to move forward in their relationship with the person they love, they need to confess. However, Lee and Maren are not ordinary people, they are cannibals, and we have seen them kill people throughout the entire film. So we see a confession of extreme violence combined with a confession of pure love from both characters. It's one of many scenes throughout the film that are hard to look away from.

While many seem to be focusing on Chalamet and his performance since he is the more well-known of the two leads, it's Russell who shines as bright as the sun in this film. Chalamet has a large role, but this isn't Lee's movie; it's Maren's.  Her journey as she travels with Lee and meets other people like her and what that means is fascinating. Apparently, the type of person that could make it to adulthood with cravings for human flesh will be complicated figures, to say the least. Russell truly helps capture that desire we all have to form relationships in both a romantic and platonic sense of the word. She is backed up by Chalamet, who puts forward one of his career-best performances with Lee. As for those complicated adult figures? Mark Rylance is the standout, but Michael Stuhlbarg and David Gordon Green also present two more parts of this equation that can be hard to look at while also being impossible to look away from.

Bones and All is a film that is hard to recommend to someone that might not know what they are getting into. It doesn't pull its punches regarding cannibalism and makes sure that we witness the bloody and violent lives of the two leads. However, the feeling of looking for a sense of belonging and love is so central to the human experience that even when Maren and Lee are covered in blood, you still relate to them and understand them. That speaks insanely highly of the source material and the people behind and in front of the camera. 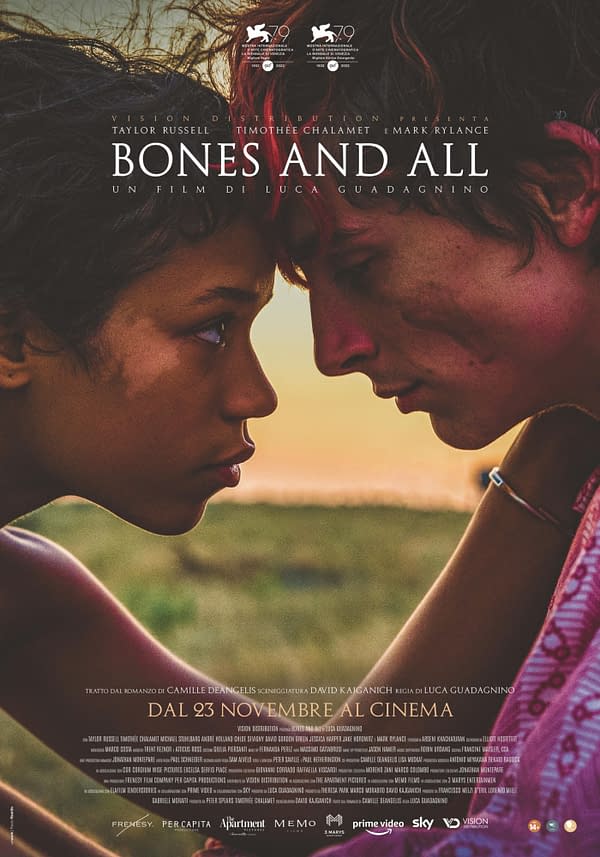 Review by Kaitlyn Booth
9.5/10
Bones and All is a fascinating exploration of the juxtaposition between a rather familiar story of people looking for love and acceptance with the bloody violence of cannibalism.