Dune is awkwardly paced and has the problem of very much feeling like half of a movie, but everything else on screen is so good that it's worth sitting through the exposition because you get to spend more time in this world.

Director: Denis Villeneuve
Summary: Feature adaptation of Frank Herbert's science fiction novel, about the son of a noble family entrusted with the protection of the most valuable asset and most vital element in the galaxy.

The problem with adapting something like Dune for the big-screen, again, now is that Dune is baked into the DNA of so many things. This book has inspired almost all of science fiction since it came out, so making it feel original was always going to be the biggest hurdle. How do you make the foundation of science-fiction feel original when everyone else has been building off of it for decades? This is the problem that Enders Game ran into when it got its big-screen adaptation, and it's a problem that seems to linger over Dune in the present day as well. There will be book fans that are just waiting for someone to make a comparison to Star Wars so they can scream about the book coming out first, but the movie is here now, and the comparisons are undeniable. The book Dune inspired the movie Star Wars and the movie Star Wars clearly influenced the movie Dune. All of these things are so tangled up that it's almost impossible to let Dune stand on its own. It's a massive book, and the movie has to dedicate a large portion of its runtime to worldbuilding.

This is going to be the moment where some people are going to really say that where Dune stumbles is in how much of the beginning of the movie is really dedicated to setting up the world, the conflicts, the various political alliances, and petty squabbles. If that sort of thing isn't your jam, then you might have a problem with this movie. However, Game of Thrones did prove that you can do slow-moving political intrigue and grab a dedicated audience. Still, Game of Thrones also proved that sticking the landing is extremely important. Unfortunately, for Dune, we can't really judge whether this movie will stick the landing. It's half a story that only feels like it's just getting started by the time the credits roll. It does mean that director Denis Villeneuve can go buck wild in part two, but that also means that part two needs to actually happen. There really isn't a good stopping point in Dune like in Lord of the Rings, which is going to be a common comparison. There isn't a normal three-act structure here, and that might lose a lot of people, but if you're on the wavelength that Dune is putting down, you're going to be very into it.

Villeneuve is one of the best directors working right now, and one of the things that he is the best at is truly making beautiful movies. Him and cinematographer Greig Fraser [Vice, Rogue One: A Star Wars Story, Zero Dark Thiry, The Batman] make the rolling sands of Arrakis beautiful in a way that we haven't seen in a long time. He manages to make the rocky mountains of Caladan, his home planet, feel lived in and welcoming while Arrakis feels desolate because it is a place where the sun can kill you. These worlds, combined with the music by Hans Zimmer doing some of the best work he has done in years, really make everything feel big, beautiful, and epic. This is a massive movie with a lot going on and a lot of ground to cover, and it very much feels like it.

The cast is here doing great work on all fronts. There really isn't a single weak member of the entire cast. A couple of people feel underutilized, but that is either a story thing that couldn't be avoided, or they are going to get a lot more screen time in part two should it happen. Paul is not the most likable main character in literature, and for a good reason, Timothée Chalamet does the best he absolutely can with a role that isn't easy. Rebecca Ferguson just needs to be in all of the movies for the rest of forever because she is the best thing in every film she's in. This is probably the most screen presence that Jason Momoa has had besides the early Game of Thrones episodes. Maybe the role is just suited to him; maybe there's more to him than what we've seen in his performances so far; it's hard to tell. Stellan Skarsgård, Dave Bautista, and David Dastmalchian make for some excellent villains that we will continue to see more of in the next movie.

However, the Fremen really gets the shortest end of the stick when it comes to screen time. Despite the movie very much playing up Zendaya's presence, and she does appear in a fair amount of dream sequences, we don't spend a lot of time with her in this movie. So if you're going in expecting to learn about her or any of the other Fremen, then you really need to wait for the sequel. The only exception is Sharon Duncan-Brewster, who does get a fair amount of screentime. The character she is playing, Liet Kynes, is actually gender-swapped from the original novel. You can feel her conflict with being one of the links between the Fremen and House Atreides once they land on Arrakis. The giant sandworms, which have been hard to show on screen in the past with technology limitations, are not shied away from here. We see the worms in all of their glory, and they are terrifying and amazing.

However, while all of this good and some questionable stuff does exist, the real test of whether or not Dune will work is going to be whether they stick the landing in the sequel. That final question will hang over this entire movie, and if it doesn't get greenlit, history will not be kind to this movie. Villeneuve seems confident that it will happen, but we still don't know one way or another until final box office numbers roll in. Dune makes some baffling decisions when it comes to its pacing and the amount of exposition, but once the movie gets going, it is spectacular to watch. Fingers crossed that we're going to get a part two. 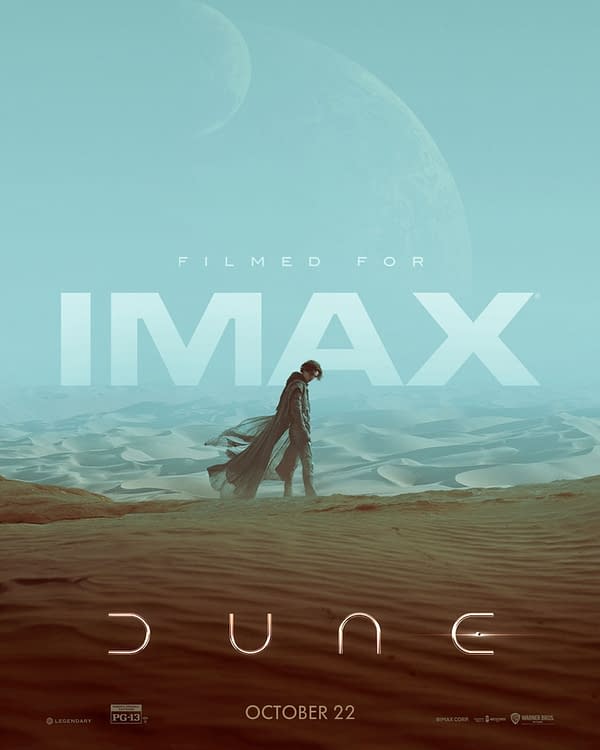 Review by Kaitlyn Booth
8.5/10
Dune is awkwardly paced and has the problem of very much feeling like half of a movie, but everything else on screen is so good that it's worth sitting through the exposition because you get to spend more time in this world.

Bullet Train won the Weekend Box Office in what should turn out to be the last big summer weekend. If only Prey was in theaters.

Elvis is a hit at the box office, and WB is wasting no time getting the 4K Blu-ray in our hands. It will release on September 13th.

Jaws Is being Released In IMAX For The First Time, Here's A Trailer

Jaws is being re-released in IMAX in September, and also in Real D 3D as well. Perfect opportunity to go see a classic.