Last Night in Soho is a visually stunning movie with some solid central performances that stumbles when it comes to the third act. However, it is one of those movies where ambition means that a stumble was almost guaranteed.

Director: Edgar Wright
Summary: An aspiring fashion designer is mysteriously able to enter the 1960s, where she encounters a dazzling wannabe singer. But the glamour is not all it appears to be, and the dreams of the past start to crack and splinter into something darker.

There was a lot of mystery behind Last Night in Soho, and the delays from the pandemic have just made that mystery an even bigger part of the movie. It is a pretty bonkers movie when you get into it, and the best way to experience this movie is to go in knowing as little as possible. The first teaser is a pretty good taste of the film you're going to get. The story involves time travel and looking back on the life of someone from the 1960s as our heroine Eloise (Thomasin McKenzie) idolizes the time period. She sees the world of London in that time period through the eyes of Sandie (Anya Taylor-Joy), and much like all forms of nostalgia for a "better time," she begins to see that things weren't as great as she thought back then either.

The first two-thirds of Last Night in Soho is uniformly pretty insane. Eloise sees Sandie's world through her eyes and we see how things might be going very wrong in the end. Bits of Sandie start to make their way into Eloise's life as she cuts and dyes her hair like Sandie's, designs a dress like the one Sandie is wearing in class, and buys clothing that looks like Sandie's clothes. Both of our leading ladies are fantastic in their respective roles. McKenzie has a tough role to play here, trying to make Eloise's fracturing sanity feel like something natural that would come from someone who is utterly overwhelmed by everything around her. Eloise is in the big city for the first time, and it's quite apparent that all of these people living on top of each other is not something she really enjoys. It's something that anyone who has moved from a small town to a city has felt before. Taylor-Joy continues to be one of the best actresses of her generation. She is haunting as Sandie, and we see her downfall just as much as we see Eloise's. However, that downfall does come with the demonization of other women, which is a bit of a spoiler but a shame that we had to go down that route in particular.

This is primarily a two-woman show, but we do have some decent supporting players as well. Matt Smith is here as Sandie's love interest Jack, and he manages to walk that charming and also "might be a complete sleazeball" line really well. Michael Ajao plays John, Eloise's love interest, but the way the movie deals with him is a bit dicey when it comes to his race. However, that is not something that I really have the capability to comment on since I am a white woman. I would encourage you to seek out the voices of other critics who can give better insight into this aspect of the movie [sources: one, two, three].  Ajao does the best he can in a rather thankless role at the end of the day. As previously stated, this really is a two-woman show, but Jack seems to have some sort of life outside of Sandie. On the other hand, John seems to only exist to be around Eloise and help her in any way he can. The contrast between Jack and John seems intentional, but there had to be another way of making John into the better man that doesn't make him a doormat to Eloise's whims.

The third act is where the movie starts to fall apart a little bit. The real problem comes down to the lack of internal logic as the story continues to unfold. To get into the specific reveal that doesn't make a ton of sense would spoil said reveal, and director Edgar Wright has said that he doesn't want people to know too much going in. The third act is something that doesn't really work, but, looking at the movie as a whole, it's hard to come up with a way that the third act would have felt satisfying. That is the problem with ambitious films that really start to mess with the idea of genre. Sometimes, there isn't a good way to end things that really make sense, and in the case of Last Night in Soho, there really doesn't appear to be a way that would have ever worked. If they had gone with the obvious answer, it would have been boring and not the ambitious project it set out to be.

Last Night in Soho has a lot going for it; excellent direction, two leading ladies putting in star-making performances, beautiful cinematography, and a killer soundtrack. However, the movie isn't perfect between the final act and some iffy choices when it comes to casting and story decisions. By the time the credits roll and the final reveal comes, it's hard to just enjoy the mood that the movie was trying to create. Instead, you're left wondering how all of this came to be and unable to look away from some serious missed opportunities. 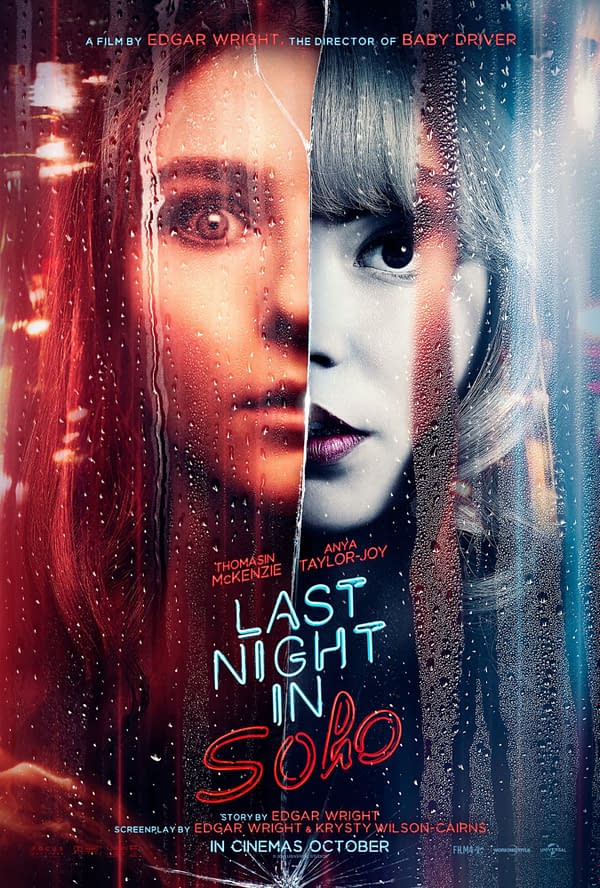 Review by Kaitlyn Booth
8/10
Last Night in Soho is a visually stunning movie with some solid central performances that stumbles when it comes to the third act. However, it is one of those movies where the ambition means that a stumble was almost guaranteed.