In the interest of full disclosure, I have not watched the original Nightmare Alley. I did no research going into this movie about the plot and only watched the teaser trailer. So the experience of going in knowing nothing will be different from someone who is familiar with the material. This is a review from the point of view of someone who knew nothing about the source material before watching the movie.

Nightmare Alley is director Guillermo del Toro operating on another level as he masterfully brings this beautiful noir film to life that will surprise people unfamiliar with the source material.

Director: Guillermo del Toro
Summary: An ambitious carny with a talent for manipulating people with a few well-chosen words hooks up with a female psychiatrist who is even more dangerous than he is.

The genre of noir is loved by plenty of film nerds, but it has had a harder time finding a place in the modern day. There are noir elements used in many different genres, but it's been a bit harder to bring more classic noir to the modern film. Much like horror or high concept science fiction, it's got a very dedicated audience, but the audience for noir tends to be smaller. Del Toro is probably one of the better-known names to try to introduce a new generation to noir. He has always loved to work with various different genres that don't always have mainstream appeal. Sometimes such movies find success, like The Shape of Water, and sometimes they don't, like Crimson Peak. There is a good chance that this is going to be another "either it works, or it doesn't" movie for del Toro, but judged on its own merits with no previous knowledge of the original film, it stands tall.

It's best to go into Nightmare Alley without knowing anything about the 1947 version of the movie. Whatever you think you're getting from the marketing or the teaser trailer is not the movie you end up with, but that's a good thing. The story is massive, with lots of supporting players to follow, who are played by some of the best actors of this generation. Del Toro always draws some truly stunning performances from his actors, and Nightmare Alley is no different. Whether it is someone we only see for a moment or someone we spend most of the movie with, all of the characters feel like complete humans with internal lives.

The actors are all bringing in some of their best performances to date. Bradley Cooper tends to be a bit hit or miss when it comes to his performances, but this is the second time this awards season that he has turned in a show-stopping performance. Unlike his brief amount of screentime in Licorice Pizza, we might see him get some recognition with Nightmare Alley. Stan is a man that is just a little too charming for his own good, and Cooper is exactly the type of actor to pull that off. It's crucial for the movie that Stan starts to believe his own bullshit, and Cooper really nails the character's slow descent. Rooney Mara does a lovely job as Molly, and Toni Collette makes quite the impression as Zeena, but it's Cate Blanchett, that steals the entire movie with a career-best performance. The moment that the character Lilith walks on screen, it is impossible to look away from her. She sucks all of the oxygen out of the room, and you cannot help but be captivated by her the same way that Stan clearly is. The way she moves, the way she speaks, everything that Blanchett does in this role is just stunning. If there is someone that owns this movie, it's her.

These great performances are all well and good, but it's the world that del Toro builds around them that really makes this movie work. There really isn't anyone better at building movies you want to spend time in and movies you want to get lost in. The film looks beautiful and reunites del Toro with cinematographer Dan Laustsen. The two of them have previously worked on the aforementioned Crimson Peak and The Shape of Water. The world of Nightmare Alley feels a bit too bright or a bit too dark at times. There aren't many moments where the movie feels evenly lit. Everything is either happening in the light, or it's happening in the shadows. Much like shooting in black and white and making it look good is much harder than it seems, it's also much harder to make a movie draped in shadow look good too. However, these two pull it off, and you cannot look away from the nightmarish world that we are seeing created on screen.

That is not to say that the movie is perfect. Like a lot of movies this year, it's probably too long at two hours and thirty minutes. The first act is very good, and the third act is very good, but the second has the difficult task of bridging the two, and that does include a fair amount of explaining and setup. It's well presented and acted setup, but it is still set up and feels like it goes on a bit long. This is also del Toro at his most del Toro since probably Pan's Labyrinth. If you're a person trying to convert a newcomer to the del Toro Fanclub, this might not be the movie for them. It's also a relatively niche movie. It's not going to have mass appeal, and if someone watches the teaser and decides that it doesn't grab them, then seeing the whole movie will not change their minds.

Nightmare Alley checks a lot of the boxes for a great movie and one that should be talked about for a long time. Whether or not it's going to find a place in the extremely bloated fall to the winter season remains to be seen, but if the fans of niche genre movies go out and see it, perhaps word of mouth could draw others to the box office. It's a beautiful movie with one hell of an ending that knocks you straight on your ass. [The ongoing pattern of movies sticking the landing this season is one that we hope continues]. The lovely world, the standout performances, and the story that goes to places you won't expect if you're unfamiliar with the source materials mean that if this movie is up your alley, it's probably going to be very up your alley. 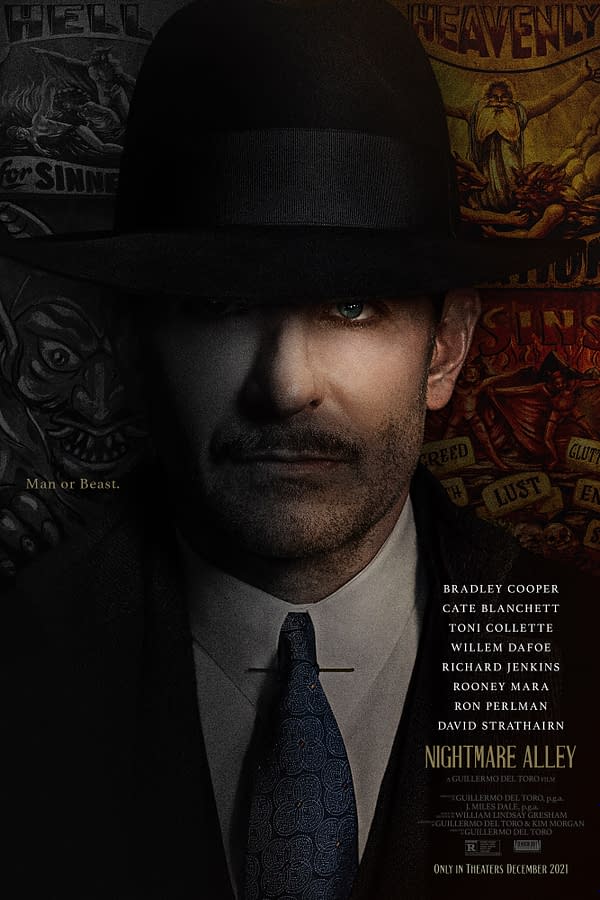 Review by Kaitlyn Booth
9.5/10
In the interest of full disclosure, I have not watched the original Nightmare Alley. I did no research going into this movie about the plot and only watched the teaser trailer. So the experience of going in knowing nothing will be different from someone who is familiar with the material. This is a review from […]