The Addams Family 2 once again wastes its specular cast and great animation style on an extremely conventional story that doesn't feel like the best use of the Addams Family.

Directors: Greg Tiernan and Conrad Vernon
Summary: Everyone's favorite spooky family is back in the animated comedy sequel, The Addams Family 2. In this all-new movie, we find Morticia and Gomez distraught that their children are growing up, skipping family dinners, and totally consumed with "scream time." To reclaim their bond they decide to cram Wednesday, Pugsley, Uncle Fester, and the crew into their haunted camper and hit the road for one last miserable family vacation. Their adventure across America takes them out of their element and into hilarious run-ins with their iconic cousin, IT, as well as many new kooky characters. What could possibly go wrong?

When it comes to animated kid's movies, The Addams Family might be one of the most frustrating to come out in the last couple of years. When the voice cast was first announced, everyone lost their minds because it was so good. Oscar Isaac as Gomez? Charlize Theron as Morticia? Sign up the hell up. Then the first images came out, and people were intrigued. The character designs were heavily drawing inspiration from the original comics that the TV was based on. That was a bold artistic decision to make and one that was commendable.

The first movie was okay; it was a bit basic and dealt with the themes you would expect from an Addams Family movie in that "they moved somewhere and the neighbors don't accept them at first but then do." It's not a bad story to tell but not entirely original. The Addams Family 2, however, squanders any goodwill leftover the first one on an even more basic story that makes no sense for an Addams Family movie; Wednesday feels like an outsider in her own family and needs to accept that she is different and that's okay.

Really, the show about being proud of being a freak and loving life even everyone around you is judging you is making a movie about making sure you love yourself. That was the thing about the Addams; they might look and act weird, but they are so nice about it that it is disarming. The Addams Family 2 has somehow made a character voiced by Oscar Isaac known for worshipping and respecting his wife into a dad that doesn't respect his daughter's wishes at all. He constantly oversteps her boundaries, and while the rest of the family isn't as bad a Gomez, no one seems to be giving the teenager going through A Thing the space to come to terms with it in her own time.

The jokes and writing are about as basic as you can get and tend not to be funny. The kids in the audience might enjoy the slapstick humor, but the parents are going to have a hard time with this one. There are a couple of sight gags in this one that, for brief moments, seems to understand the audience who is into the Addams Family and might take their kids to this movie, but they are few and far between. The best one is when they are in Death Valley, and you'll know it when you see it.

When reviewing animated movies like this, we often bring up the difference between a kid's movie and a family movie. A kid's movie is something that the kids will enjoy, while the parents will likely spend the 90 minutes zoning out and not really paying attention. However, a family movie appeals to all age groups, and everyone could get something out of it. The Addams Family 2 clearly wants to be a family movie with some of the references and jokes that would go right over a kid's head [aforementioned Death Valley scene in a prime example], but the writing and emotional investment just aren't there.

The Addams Family 2 isn't horrendously bad, but just because you are making a kid's movie doesn't mean you get to phone it in. Kids are not stupid adults; they have their own unique way of looking at the world and the best movies are the ones that tap into that mindset. The Addams Family 2 does not, and it's frustrating because the art style is so unlike anything we see in kid's animation, and the voice cast is so good that the missed opportunities are just too much. Unless your kids are fans of the first one, there is very little reason to seek it out; track down the original show or movies instead. Or rent ParaNorman from Laika if you're looking for a kid's movie that leans toward Halloween that won't insult anyone's intelligence. 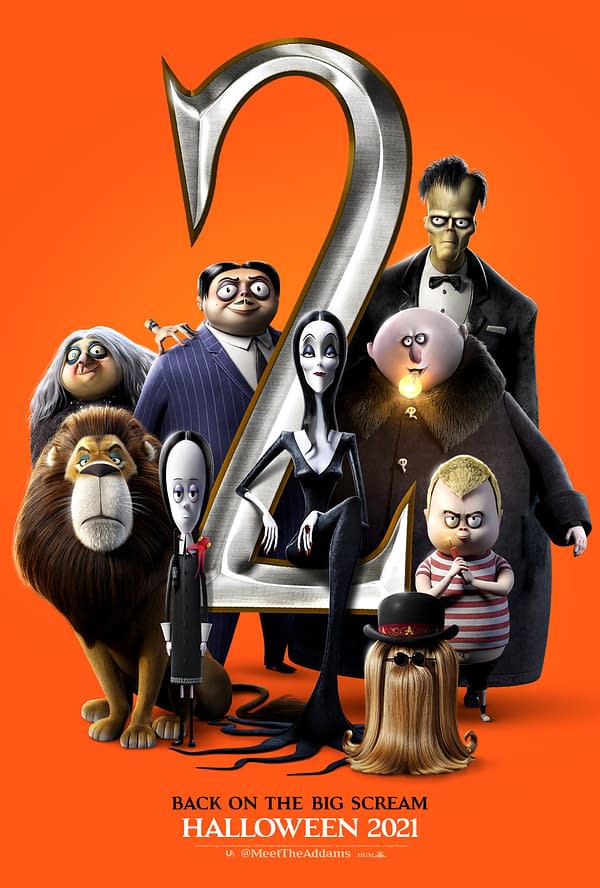 Review by Kaitlyn Booth
3.5/10
The Addams Family 2 once again wastes its specular cast and great animation style on an extremely conventional story that doesn't feel like the best use of the Addams Family.