On a week where AEW should have just given up and let WWE soak in all the attention for bringing back John Cena, Tony Khan insisted on going ahead with Fyter Fest Night 2 on AEW Dynamite this week. The Chadster will now review the entire show in his completely unbiased manner.

As usual, Dynamite bucked convention by starting the show with an exciting match instead of a boring promo. If there's one thing The Chadster hates, it's bucking conventions. WWE starts off Raw and Smackdown with boring promos for a reason. They have to set the viewers' expectations for the rest of the show. If you start out with a long, boring promo, it makes the viewers like The Chadster himself feel safe and comfortable, and they can settle in for the next two or three hours. Then, if something exciting does happen later, it exceeds expectations and feels special. AEW is taking all the "special" out of wrestling with stuff like this. Anyway, Chris Jericho overcame Shawn Spears in a match where Spears was allowed to use a chair but Jericho wasn't, the first Labor of Jericho (or is that Labour of Jericho?). Tully Blanchard tried to interfere, but Sammy Guevara chased him off. Jericho took one hell of a chair shot to the head toward the end of the match when he had Spears in the Lion Tamer, but kicked out and sent Spears into a chair in the corner, followed by a Judas Effect, for the win.

After the match, MJF said Jericho was no longer allowed to have help in future labors and introduced the next labor: a no disqualification match with Nick Gage for next week. At first, The Chadster was confused, wondering why the star of Pig was going to wrestle Chris Jericho, but it turns out that's actually Nicholas Cage. Nick Gage is the deathmatch legend and GCW Champion who wrestled David Arquette in that movie. It's been a long time since The Chadster saw Ready to Rumble, but he remembers it being pretty good, so this may be a halfway decent match, The Chadster is loathe to admit.

Doc Gallows beat The Elite Killer Frankie Kazarian in a match, with much interference from Karl Anderson. The point of the match was to get to the post-match beatdown on Kazarian, which led to Kenny Omega and Don Callis joining in, which led to Hangman Page coming out, which led to Hangman Page getting jumped, which led to the Dark Order making the save. It's so unfair that The Dark Order, who are such a goofy group, have gotten over like this in AEW, when fans were so critical of WWE groups like Retribution. Obviously, there's a double standard there, and it's all Tony Khan's fault.

Darby Allin fought Wheeler Yuta, with Sting in Darby's corner and Orange Cassidy in Wheeler's corner. Wheeler is apparently a prodigy of the Best Friends, according to Excalibur, who explained it once and then again when JR forgot about it. Two things about this match really cheesed The Chadster off. First of all, an exchange between Sting and Darby Allin outside of the ring was way to silly and fun for The Chadster's tastes, even though the crowd ate it up. And second, how did this Wheeler Yuta guy land a sponsorship deal with Subway?! People accuse WWE of selling out, but here is Tony Khan cutting a deal with a Subway chain to use their branding on Wheeler Yuta's tights. Hypocrites.

Dr. Britt Baker survived a title defense against Nyla Rose, another step in Baker's rise to be one of the top stars in AEW. That's not surprising considering the unfair advantage Baker has: she gets to have a last name. Everybody knows that female wrestlers should only have one name, like "Shotzi" or "Nox." Of course Baker is gonna get over with two names. Duh. The Chadster hopes Adam Cole dumps her soon.

AND STILL! @RealBrittBaker retains the #AEW Women's Title in a tough battle

In a press conference that could have used some smoother editing, Proud and Powerful argued with FTR about who was poorer growing up. They'll settle it in the ring.

Speaking of people who need to get dumped by their WWE partner, Andrade El Idolo cut a promo and revealed that Chavo Guerrero is his new Executive Consultant. Once again, AEW disrespectfully brings back someone who WWE decided years ago was no longer suited for an on-camera role. The Chadster doesn't know why he expects anything different from Tony Khan at this point. Tony Khan clearly has no respect for his elders, because he has too much respect for his elders and keeps putting them on television. Death Triangle came out and Andrade tried to get them to work for him, but was forced to retreat when they declined his offer and tried to start a fight… after politely waiting for the referees to run out and get in the middle of it.

What?! Chavo Guerrero (@mexwarrior) is here and he's the new executive consultant for @AndradeElIdolo.

Another Guerrero family traitor. For years, Vince McMahon explored Eddie Guerrero's death for his own personal gain, and this is how the Guerreros repay him? Disgusting.

Orange Cassidy beat The Blade after Kris Statlander neutralized interference from The Bunny. The Blade tried to use brass knuckles on Cassidy, which he hit him with earlier right after the Wheeler Yuta vs. Darby Allin match, but Cassidy stopped him with an Orange Punch. After the match was over, Cassidy hit the punch again with the knuckles on. Cassidy was all business in this match, motivated by The Blade's attack earlier, which is totally unacceptable. If The Chadster has learned one thing from years of watching WWE, it's that a wrestler's gimmick needs to be one-dimensional. You don't see R-Truth doing anything serious. If you're a comedy wrestler, you're a comedy wrestler, and that's how it should be, but Tony Khan has no idea how to book a wrestling show, and neither do any of these fans who are eating it up.

In a brutal Texas Deathmatch that involved a lot of unsavory face gouging with a fork, Lance Archer won the IWGP United States Championship from Jon Moxley by chokeslamming him from the apron through two tables with barbed wire boards on top of them. After that, NJPW star Hikuleo, who JR kept pointing out is the son of Haku, hit the ring to stand next to Archer before he challenges for the title next week. Isn't it just like Tony Khan to totally overshadow WWE's big moment from Raw, where Nikki ASH appeared at the end of the show to cash in her Money in the Bank briefcase and win the Raw Women's Championship with no build, by booking Lance Archer to finally beat Jon Moxley clean for a title after losing his previous matches. You just couldn't let WWE have this one, could you Tony? Such jealousy.

As usual, AEW Dynamite was a well-booked, coherent wrestling show that the fans seemed to thoroughly enjoy, and The Chadster takes this very personally. Tony Khan has no respect for Vince McMahon and how WWE paved the way for pro wrestling and continues to try to outshine WWE at every opportunity, and The Chadster finds that extremely rude. Maybe with age Tony Khan will become more mature and stop trying to show off with his booking all the time, but with another big event next week called Fight for the Fallen, and rumors that those traitors CM Punk and Daniel Bryan may show up in AEW soon, The Chadster expects this disrespect to continue for a while. 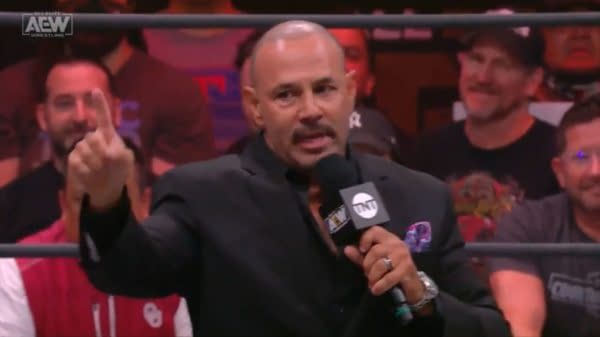 Review by Chad McMahon
8.5/10
As usual, AEW Dynamite was a well-booked, coherent wrestling show that the fans seemed to thoroughly enjoy, and The Chadster takes this very personally. Tony Khan has no respect for Vince McMahon and how WWE paved the way for pro wrestling and continues to try to outshine WWE at every opportunity, and The Chadster finds that extremely rude. Maybe with age Tony Khan will become more mature and stop trying to show off with his booking all the time, but with another big event next week called Fight for the Fallen, and rumors that those traitors CM Punk and Daniel Bryan may show up in AEW soon, The Chadster expects this disrespect to continue for a while.

The Chadster looks at the wrestling ratings from last week. Who won? Who lost? How did Tony Khan manage to cheat this time?

Once again, Tony Khan booked an exciting AEW Dynamite with multiple surprises that the fans seemed to enjoy, and The Chadster takes that personally.

As a raucous Texas crowd welcomed this week's episode of AEW Dynamite, Fyter Fest Night 1, The Chadster was filled with a deep rage.

Everything The Chadster Hated About AEW Dynamite: Road Rager

The Chadster reviews AEW Dynamite: Road Rager and explains why the show being so good is unfair and disrespectful to WWE.

AEW has released 70 photos from last night's episode of AEW Dynamite, the final Dynamite of the pandemic era at Daily's Place.

Ever wonder which The Walking Dead character you REALLY are? Take the quiz & find out- Jeffrey Dean Morgan and Lauren Cohan did!

With the series premiering its sixth & final season on September 10, Netflix treated Lucifans to a brand new set of Lucifer preview images.

With the series set to return on August 8th, The CW released preview images for DC's Legends of Tomorrow S06E11 "The Final Frame."

NXT Preview For 7/27: How Will Samoa Joe Respond To Karrion Kross?

The preview for tonight's NXT on SYFY, which will see Samoa Joe respond to Karrion Kross's attack last week on GM William Regal.