FOX's Bob's Burgers brings out all the emotions as Bob (H. Jon Benjamin) and his family attempt to find his mother's grave before some snow tubbing with the kids in "Show Mama from the Grave." Warning, some spoilers may be waiting ahead for you, so make sure to watch the episode first and then come back if you don't want anything revealed to you. Otherwise, see you on the other side of this image break…

Honestly, this may be one of the most important episodes that Bob's Burgers has developed. There's a level of raw humanity in this episode that involves aspects of grief, generations, and memories. The ways in which people help one another get beyond certain fears, like Teddy (Larry Murphy) helping Linda (John Roberts) get the courage to go and look for her family in the cemetery, shows how much these characters love and care for one another. The dialogue between characters, particularly moments like those between Bob and the kids, is so rich and fulfilling. Bob didn't have to say more than "Hi, Mom" for me to break down into tears. I haven't lost a parent, but there's a level of authentic emotion in these moments that anyone can relate to.

Bob's Burgers has given its whole heart to this episode. The creative and dedicated minds behind the story featured here are showing the detail and love for each character in every scene. The realistic complexity of large cemeteries and the self-doubt that can sink in, as it did for Bob, is only a portion of what made this episode absolutely fantastic. The animation and attention to detail in the lighting and colors were gorgeous. As the sun was setting and it became difficult for the Belchers to believe they'd find the grave of Lily Belcher, the surrounding environment was immensely calming in a way that calmed the soul and eased you into a potentially emotional set of scenes.

The blend of comedy and grief was superb in this episode of Bob's Burgers. When scenes with Teddy were involved, they didn't take over the episode and split up the attention between stories. Teddy added to this episode in his own way, and it ended up signaling some major moments for Linda's character and her love for Bob. This episode connects to the deepest roots within the desire for connection and clarity through some unfair regrets that can invade grief and how death can be a difficult thing to understand in our hearts, even if it makes sense in our minds. Truly, this episode was an emotional journey for both fans and newcomers to the series.

In tonight's Bobs, we designed the lady on the right to wear a sunflower. The sunflower is a symbol representing hidden disabilities such as sensory processing difficulties, anxiety and Autism Spectrum Disorder. It might be a small nod, but felt it important to include. 🌻 pic.twitter.com/QpNF4x3GPo 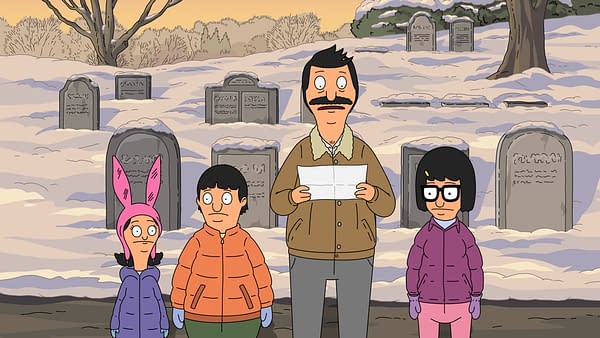 Review by Brittney Bender
10/10
FOX's Bob's Burgers S13E09 "Show Mama from the Grave" was an emotional journey for both fans and newcomers to the series. This episode connects to the deepest roots within the desire for connection and clarity through some unfair regrets that can invade grief and how death can be a difficult thing to understand in our hearts, even if it makes sense in our minds. With gorgeous animation and details, this episode hits it out of the park.
Credits
Network
FOX