As happy as I am that Brooklyn Nine-Nine is back after its long hiatus, the new season serves as a constant painful reminder that its last legs. Aside from the poignant moments of certain characters whether if it's Charles Boyle's (Joe Lo Truglio) bout with mortality, Rosa Diaz's (Stephanie Beatriz) disenfranchisement with law enforcement, the deteriorating relationship between Capt. Raymond Holt (Andre Braugher) and husband Kevin Cozner (Marc Even Jackson), or simply the fact the ONLY screen time we see of Dirk Blocker's Hitchcock is via video conference, it's just been more depressing than funny. So here's your spoiler alert for the fourth episode of Season 8, "Balancing".

So despite never really building up Johnny Franzia much from previous episodes, we discover that Det Jake Peralta's (Andy Samberg)  "white whale" case regarding the aforementioned serial killer. It seems random without any allusions in previous episodes. At a briefing, Lt. Terry Jeffords (Terry Crews) gives Jake crap about not having an arch-nemesis because he finishes all his cases conveniently forgetting the case Peralta help him solve from his early days on the Force. The conflicting arc involves Jake's wife Sgt. Amy Santiago (Melissa Fumero) having to make a presentation to help reform the NYPD due to the institution's continued issues with the general public. Caught in the middle is their son Mac as we go through how Jake and Amy try to find care while not sacrificing their work in the process.

The corresponding B-arc story is Holt temporarily shacking up with former Det. Diaz at her apartment since Holt's continued marital problems. As with any rule in a sitcom when inviting a person to temporarily live with another character in need, Holt proceeds to check all the boxes for talking about the spouse he misses much to her annoyance. It feels like since the dramatic change for Rosa in the premiere, they severely undercut Beatriz's character in regards to the show. The second episode regulated her to throwaway comic relief in a useless arc. The third episode had Holt call in a "favor" with her getting something that his staff couldn't get by normal means never mind never showing how she actually got it. Beatriz is just getting wasted here this season and I feel bad considering how well the series built the rapport with her character. "Balancing" still doesn't do much with Diaz other than playing the straight role of Holt's whining.

Directed by Daniella Eisman and written by Evan Susser and Van Robichaux, "Balancing" is consistent as far as Brooklyn Nine-Nine's feeling it coasting on cruise control to the finale. Samberg, Fumero, Truligo, Braugher, and Beatriz aren't really challenged and gave what the episode needed. Brooklyn Nine-Nine airs Thursdays on NBC. 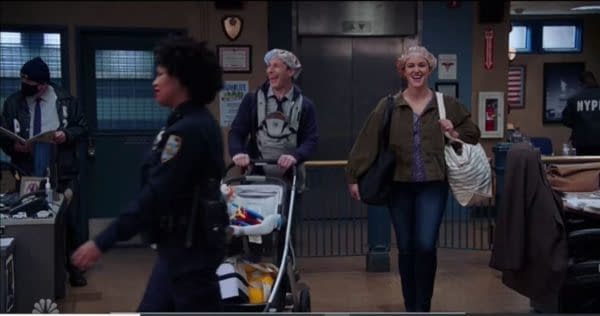 Review by Tom Chang
5/10
Brooklyn Nine-Nine shouldn't be trying so hard to tread carefully. It should be going out in a blaze of glory especially in its final season. There's nothing wrong with exploring the struggles of new parents, but it seems like the series doesn't have much else to say especially when they blandly recycle the "Odd Couple" sitcom cliche as its B-story.
Credits
Director
Daniella Eisman