The last episode of Demon Slayer: Kimetsu No Yaiba Mugen Train Arc, "Set Your Heart Ablaze", has arrived, and with it, sorrow. This episode is as beautiful visually as it is sad. After saving the passengers aboard the Mugen Train, our heroes are then faced with new adversity: an upper-rank demon, Akaza, has now appeared and is ready to wage war against them… but not before offering Kyojuro an eternal membership in Muzan's demon club.

Kyojuro stands between Tanjiro and Akaza, and sure puts up a helluva of a fight against Akaza. This battle was so flipping beautiful—the use of dialogue and visual elements along with the music was fantastic. Once again: one of my favorite things about Demon Slayer is the use of natural elements to accentuate the characters' powers. The music for this arc was also on point; the Rengoku theme was definitely my favorite, however, the theme for the battle between Kyojuro and Akaza was a close second. I swear, these game me the chills.

I had seen the film and read the manga, yet I was still not ready for the heartbreak yet again of saying goodbye to the purest homeboi, Kyojuro. So much so I discussed with my editor the possibility of making this review just a ton of crying face emojis. Needless to say, I was not taken up on the offer, but the heartache is too deep to not discuss Kyojuro's best moment.

The conversation he has with Tanjiro during his last moments is one of the best dialogues and set the perfect tone to start elevating things and start a new phase. Even though Tanjiro, Inosuke, and Zenitsu had recently met the Flame Hashira, he still caused a really big impression on them and took them in under his wings. This is one of the most heartfelt conversations and there is no way I can get through it with dry eyes. Him telling the boys he believes in them and encouraging them to go on living with their heads held high and their hearts ablaze got me bawling, but it was Kyuojuro telling them that he believes in them and in Nezuko was what got me.

Kyojuro to me is an example of a wonderfully designed character: heart, soul, character, and power— the best combination without having to be a cry baby. The anime did great by Kyojuro and by this arc in general, building up where things had felt rushed and giving us more of Kyojuro to love. Mugen Train was a fantastic arc as both serial anime and film— as a film, I will go as far as saying it is one of the best anime films I have seen. I laughed and cried, but now I am ready for one of my favorite arcs, The Entertainment District, and to meet the anime version of our favorite flamboyant hashira. 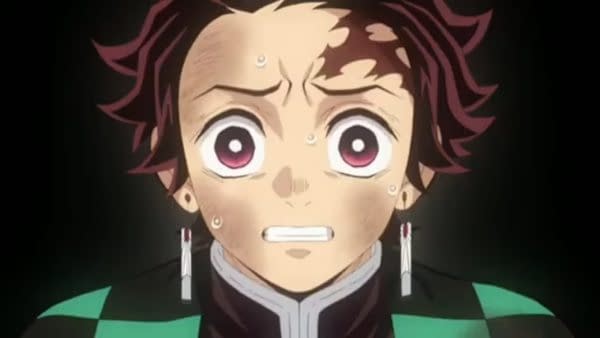 Review by Alejandra Bodden
9.5/10
The last episode of Demon Slayer: Kimetsu No Yaiba Mugen Train Arc has arrived & with it, sorrow. "Set Your Heart Ablaze" is as beautiful visually as it is heartbreakingly sad.

Demon Slayer: Kimetsu No Yaiba Entertainment District Arc Episode 7 "Transformation" was an impressive treat for both the heart and the head.