Greetings, comrades! It is I, your El Presidente, back to deliver my thoughts on the latest episodes of my favorite trash TV shows. This week's episode of MTV's Floribama Shore, Season 4 Episode 19, is titled A Lot Alike, and it may be the calm before the storm as the copacetic relationship between the roommates becomes strained and drama looms around the corner.

The drama between Aimee's pet pig, PGP, and Nilsa's pet dog, Ravioli, continued this episode as Nilsa and Aimee brought Ravioli to the vet. Nilsa blamed the roommates' messiness for her dog eating too much human food and PGP for her dog eating too much pig poop. But as it turns out, the vet gave the all-clear for pig poop eating, though they did ask Ravioli to cut back on the human food. Haw haw haw haw!

Comrades, there is nothing more important than a healthy diet. I once lived off insects and tree leaves for a month while living in the jungle in preparation for one of my famous coup attempts, and let me tell you, I would have killed for a nice pig poop sandwich. You learn to appreciate the finer things in life under those conditions, which is why I keep a bag of fresh pig poop in my fridge at all times.

While the girls were at the vet, Codi pranked Kirk and Jeremiah by changing the clocks in the house and then waking them up claiming they'd slept all the way to dinner time. The three of them decided to take the pontoon boat out on the lake, but the engine stalled and they got stuck, forcing Gus to come to the rescue in a kayak. Candace watched Gus tow the boat back but was still foolish enough to get on the boat, at which point the boys untethered it from the doc and pushed her back out. Since Candace fears the water, that left her trapped until Codi came to the rescue.

It reminded me of this time at the Dictator's Retreat when Kim Jong Un got himself stranded on a floating log in the middle of some river rapids, and Putin had to swim out and save him. Of course, Putin never misses an opportunity to rip off his shirt and jump in the water, comrades, but even I have to admit he was quite an impressive side carrying Kim in his arms like baby, the river splashing around his well-defined abs as the sunlight glistened off his sweaty brow. Gus only wishes he could look that good with his Uncle Jesse from Full House haircut and wardrobe, comrades! Haw haw haw!

As Gus endeared himself with the other roommates, he sparked new drama with Candace when he invited his sister to come for a visit. Viewers of the first half of the season will remember that Gus's sister threatened to fight Candace when Gus ran away after an argument with her in Montanna, so Candace was not pleased to hear she would visit the house, since they have apparently not reconciled since then. Candace invited her own friend Bethany to visit and back her up, but the other roommates growing closer to Gus did drive a wedge between them and Candace.

Thank Karl Marx for this, comrades. I was getting really sick and tired of all the roommates getting along so well. You know your reality television show needs an influx of drama when the biggest conflict of the season has been between a dog and a pig. Luckily, it looks like things are going to heat up next episode, comrades, and let me tell you, I am here for it! Until next time: socialism or death! 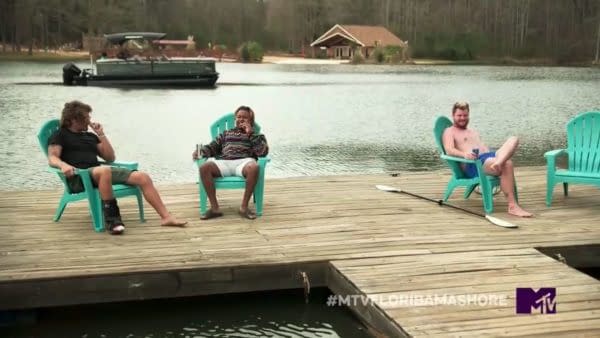 Review by El Presidente
6.5/10
Thank Karl Marx for this, comrades. I was getting really sick and tired of all the roommates getting along so well. You know your reality television show needs an influx of drama when the biggest conflict of this season of MTV's Floribama Shore has been between a dog and a pig.