With the premiere of Freeform's Motherland: Fort Salem season three, our favorite unit of witches is back and preparing for war. And with it so is the sense of urgency that comes with the war on Witches from the government after being set up last season. The show started and it hit the floor running without feeling the need to rush and introduce us to all of our players again, which was a fantastic move. Even though some time has passed since they fled, it was easy to follow and the tenseness just kept rising.

Our unit is back. While Raelle (Taylor Hickson) seems to be enjoying her reunion with Scylla (Amalia Holm), Abigail (Ashley Nicole Williams) and Tally (Jessica Sutton) are not enjoying this one bit. As always, Abigail is dying to get out and fight while Tally just wants to prepare to fight too. Their relationship seems to be steady as sisters still, which I am very happy about. It is always great when character development is retained in a story without feeling the need to incorporate overused tropes. I think the moment they cemented their friendship and a relationship started blooming among them is when the show started getting so much better.

The witches are currently fugitives and trying to remain safe with Scylla's friends hiding under different faces. However, the trio is adamant about changing their faces as they do. It seems this makes the group uneasy and it is addressed to them to try to do their best to keep them safe as well. But we all know our witches by now, and we know that staying put is not one of their strengths. Abigail decides to get out and call her mom as Tally trains on the roof with Nicte (Arlen Aguallo Stewart) who is giving the young witch very good advice to sharpen up her skills and powers. But nice things do not last long and they are seen by mistake, which leads to their lair being discovered and the witches had to go on the run again.

While sad, it was nice to see all the different layers of relationships and how they have been affected by the turn of events and shift of power: Adil (Tony Giroux) and Abigail; Scylla and Raelle; Petra (Catherine Lough Haggquist) and Abigail; Raelle, Abigail, and Tally; Scylla and Tiffany (Ava Marchfelder)… most of the bonds among the witches regardless of their type seem to have gotten stronger with the threat of extinction looming over them. The Camarilla has made a great attempt at hurting them, and we have seen now they have discovered the mycelium. In order to hit the witches even harder, they have now started poisoning it.

This episode was giving me so much anxiety when I was watching and had me screaming at my TV. It was a fantastic first episode that conveyed the urgency and tenseness so perfectly. I feel for the witches and with each episode, they make it so much easier to relate to our leads and what they are going through. As I have mentioned before, this series is a cornucopia of representation for LGBTQIA+, diversity, feminism, and just good writing regardless of the dramatics. I feel it is even more relevant for today's times as it actually feels like women have to be on the run now, that our rights are being taken away with our humanity and capacity of making decisions being dismissed. This episode of Motherland: Fort Salem feels like a cry of war for all women. That said, it also shows that there are pieces of poop on every camp, since the Camarilla also has women in it. I think it is a true testament to humanity in some very not-so-good ways.

Motherland: Fort Salem certainly does a great job at challenging pre-conceived notions of what it is to be a woman. I am very excited to see how all this goes and where it will end. It seems the mycelium is ready to fight back and has picked a badass face: General Alder (Lyne Renee). We see her grow from the moss as a guy was singing. I believe that it is not just General Alder, but the Mycelium itself. I am so excited to see her back though, she is so badass. I cannot wait to see what Anacostia (Demetria McKinney) will do once she sees her. That will be one hell of a kick-ass duo back together. 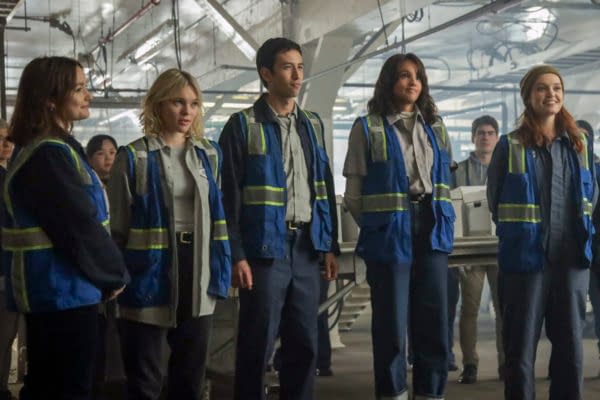 Review by Alejandra Bodden
8.5/10
With the premiere of Freeform's Motherland: Fort Salem season three, our favorite unit of witches is back and preparing for war. And with it so is the sense of urgency that comes with the war on Witches from the government after being set up last season. The show started and it hit the floor running without feeling the need to rush and introduce us to all of our players again, which was a fantastic move. Even though some time has passed since they fled, it was easy to follow and the tenseness just kept rising. And what speaks most for the episode is how it stands as a metaphor for what's currently going on in the U.S. regarding abortion rights and a war on women now shifting into overdrive, though filmed well before this week's Supreme Court decision.

A new trailer for Studio MAPPA's highly-anticipated anime Chainsaw Man has been released, carrying a beautifully edgy and gory vibe.

What We Do in the Shadows S04E05 "Private School" Embraces Family

FX's What We Do in the Shadows S04E05 "Private School" was a fun & fascinating look at the importance of family in all of its forms.

My Hero Academia "Laugh! As If You Are In Hell": Never Change, Deku

Crunchyroll's My Hero Academia OVA, "Laugh! As If You Are In Hell", focuses on the trio we've been wanting to see more of, and it works.

Crunchyroll's My Hero Academia OVA "Hero League Baseball" is a fun, home run-hitter that would've fit in nicely with the fifth season.

Cartoon Network, FOX Kids Latin America Helped Make Me Who I Am Today

Growing up in the Dominican Republic, cartoon channels were a different thing & FOX Kids Latin America & Cartoon Network were my childhood.