Endeavor falters in this week's episode of My Hero Academia when presented with a very extreme case of fanaticism. Endeavor is presented with his biggest inner struggles in this episode and it might either help fix the Todoroki family or break it even more. Deku, Soto, and Bakugo show how far along they have come in just a week of training. The episode did an impressive job in presenting Endeavor's inner turmoil and how much he has kept inside bearing the weight of damaging his family. While there is some he seems to keep and does not seem to have revealed to us just yet, we do learn that he has been bearing the guilt for it all even after confessing he was not shunning his family even when it came out as such. I am glad we are getting to know more about Endeavor and love seeing how his attitude has changed throughout the seasons.

The episode starts exactly where the last one left us: the awkward aftermath of dinner with the dysfunctional Todoroki family. It seems Deku's words truly touched each member of the family, but unfortunately, uncomfortableness was not the only thing in store for them that evening. Turns out that there is a very extreme fanatic stalking Endeavor and his family in order to get his wish fulfilled: dying at the hands of Endeavor. Ending decides to kidnap Natsuo to provoke the number 1 hero and Endeavor is unable to properly fight, faltering and freezing.

Deku, Shoto, and Bakugo on the other hand put Endeavor's advice into action, using their powers like extensions of themselves without stopping to think about it. They manage to save Natsuo & the bystanders and catch the villain before Endeavor could even move. And just a week after starting their hero studies! Endeavor manages to run and hug Natsuo and Bakugo, thanking him. It was a very nice scene in which Endeavor pretty much poured his heart out to Natsuo, telling him that even if he is not able to forgive his father, he is still a kind boy. Why do we feel like My Hero Academia is steering us toward "heartbreak city"? I am also very excited to see more of Deku, Shoto, and Bakugo kicking some ass. All in all, a strong outing that packed punches and heart. 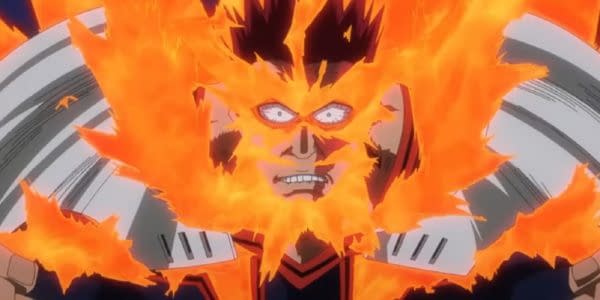 Review by Alejandra Bodden
9/10
Endeavor falters in this week's episode of My Hero Academia when presented with a very extreme case of fanaticism, presenting him with his biggest inner struggles that could end up either healing the Todoroki family or driving them even further apart.

What We Do in the Shadows Season 3 E03 Review: Nandor Gets Twilight'd

This week's episode of What We Do in the Shadows "Gail" offers another chapter in Nandor's heartbreak while it also "out-twilights" Twilight.

What We Do in the Shadows Season 3 E02 Finds A Lovelorn Nandor: Review

FX and FX on Hulu's What We Do in the Shadows Season 3 "The Cloak of Duplication" finds a lovelorn Nandor wading into the dating pool.

While enjoyable, HBO Max's Adventure Time: Distant Lands "Wizard City" was the weakest & had me wondering why they closed out with this story.

What If…? Season 1 Episode 7 Review: What If Thor Was The Worst?

What If...? Episode 7 shows that Thor is apparently one lost relationship away from being an unlikeable dudebro who is boring to watch.

With a new episode set to hit this Sunday night, AMC released the official promo for The Walking Dead Season 11 Episode 6 "On the Inside."

Agents of S.H.I.E.L.D. star Chloe Bennet took to Instagram to shut down rumors she was reprising Daisy for Disney+'s Secret Invasion.

It's Always Sunny in Philadelphia: The Gang's Group Pic Hits Our Feels

The Gang from It's Always Sunny in Philadelphia shared a group pic from their location filming that reminded us we can feel (unlike Dennis).