STARZ's Shining Vale has been ramping up the connection between the Phelps family and their new home giving things an honest effort. Warning, though: if you wish to avoid spoilers of any kind you should stop reading here.

The signals made between the embodiment of Rosemary within Pat and Pat herself were done in a subtle yet effective way. This was true especially when Pat was speaking with her family and Terry during a morning rush, fixing lunches for them and ironing like Rosemary would have done. The clothing and food in this episode were a perfect match for what was happening with Pat and the house. Meals straight out of a 1950's cookbook focused on gelatin and specific shapes made me laugh.

Shining Vale has managed to develop a family that is as dysfunctional as hell, yet I continue to squash efforts within myself wanting to dismiss them, and instead, I want them to make it through the mess. The moments like the one between Gaynor and Pat are something I'm glad are included because it shows the mix of good and utterly malevolent actions Rosemary can hide behind. I wish we had these moments earlier or slowly sprinkled them throughout as a build-up to this episode. It felt a tad late to include if now in the second to last episode of the season, but I'm glad they weren't left behind when they could have been this time around.

When Jake said, "I was born nervous", I felt that one a little too much. There were some great moments of dialogue, especially the most random moment with Laird at the party and his awkwardness. The fluid motion between moments of absurdity and light-hearted comedy and then moments of intense tension are fantastic in this episode of Shining Vale. The purposeful and relaxing chemistry between Terry and Kathryn is so important in comparison to other connections. The struggle between Pat and Terry trying to make things work out is the horror of certain relationships and has a lot of meaning in the landscape of television right now. This episode proves to Pat that Rosemary is now more than ever…not someone to fuck with. 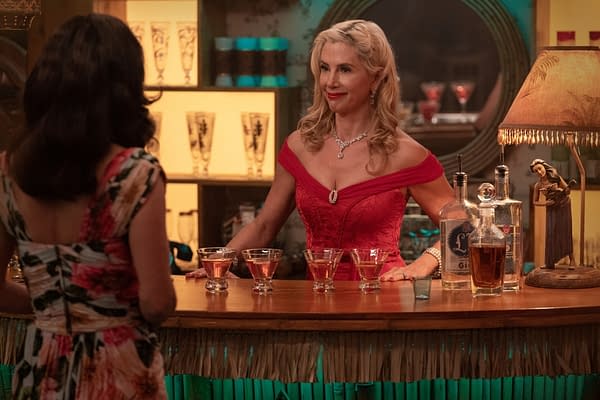 Review by Brittney Bender
10/10
STARZ's Shining Vale, S01E07 "Impertinent Questions" brought a lot of hope for the series as it nears the season finale. Mixing moments of absurd comedy with quick tension, the episode heightened the appeal of Pat's struggle with Rosemary as she fights for her own well-being and for answers.
Credits
Network
STARZ