This episode of STARZ's Shining Vale was like a rollercoaster, not of emotions but rather of intrigue and then disappointment. It wasn't constant moments that flopped, but it was areas where the series should have succeeded or at least hit the mark and it didn't that hurt me the most. Warning, though: if you wish to avoid spoilers of any kind you should stop reading here.

Shining Vale does some excellent nods at The Shining with past episodes, but I particularly enjoyed the beginning which gender-swapped the interaction between Jack and Wendy at his typewriter. What made that opening scene so good was how it ended, signaling the disconnect and struggle between Pat and Terry continuing to develop a better relationship and how the house and/or Rosemary may be latching on and holding things back. It's the same reason why a lot, including myself, have seen The Overlook Hotel as a character in itself in The Shining, and why I now can see that in the Phelps' home in Shining Vale. What I could definitely do without would be the title cards signaling the days of the week. As much as I love a fun transition like that, it feels out of place and as if it only messes up the episodes.

There's a lot of potential in further developing Jake's character and it's simply not being done. It's as if Shining Vale keeps going between two paths, either wanting to focus on everyone in the family with little or no development towards the children or simply focusing a majority of the time on Pat and Terry. The house is being done justice, both in design and use, but it's being left behind some as the writing has an identity crisis of sorts in deciding if the house or the kids are worth more in character investment. The dialogue between Pat and Terry has improved quite a bit, making me love some of their interactions, particularly this episode when they chat in the newly discovered bar and lounge area of the basement. Terry's character shows his flaws and is excellent up against Pat's personality. I shouldn't want to fully hate the kids, I should be given a crumb of concern but I don't feel it when the focus is put on them. The purpose of Gaynor in this episode keeps floating back and forth between feeling like a filler or of importance to the story. Somewhat of the same could be said of Jake as well. Their environments end up doing more for plot progress than they seem to at times.

I'm having a difficult relationship with Shining Vale, a series evident of fantastic casting and design but falling short when it comes to direction and purpose. I go from loving these beautiful scenes involving Rosemary to then feeling that an interaction with the kids is a tad too unrealistic even in a setting such as this. I loved moments such as Terry ordering his drink, as I do love a fruity cocktail more than simply just shots of hard liquor. I care about some of these characters, but there could come a moment where I don't anymore. Shining Vale can have difficult teenage characters with real flaws like anyone else, but I shouldn't want to avoid scenes with them in it. It's messing with some quite talented actors' potential.  I'm curious what others thought about this episode, let me know in the comments below! 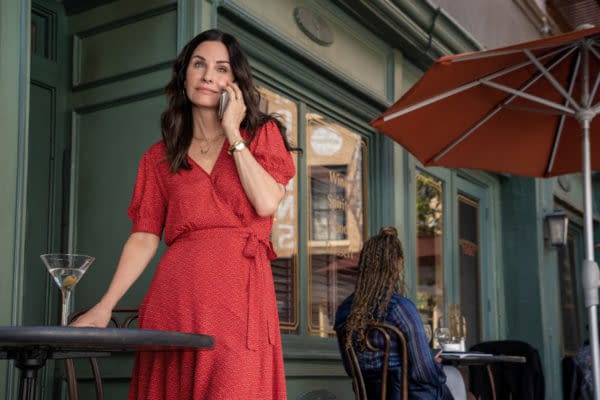 Review by Brittney Bender
6.5/10
STARZ's Shining Vale S01E04 "So Much Blood" relies too much this week on its impressive cast & visual design while falling short when it comes to direction and purpose, especially when it comes to the younger characters.
Credits
Network
STARZ

In the second part of Bleeding Cool's conversation with The Rewatcher hosts Alaina Urquhart & Ash Kelley, it's "Buffy," Halloween & more.

Kevin Can F**k Himself Season 2 Ep. 6 Review: Give Diane All The Hugs

Bleeding Cool chatted with Alaina Urquhart & Ash Kelley about The Rewatcher: Buffy the Vampire Slayer, their new podcast with Wondery.

Pierre Tsigaridis' horror film of dark tales, Two Witches, has plenty to offer visually, but the clumsy writing & story get in the way.

With a new episode this weekend, Saturday Night Live host Brendan Gleeson and the SNL cast checkd in earlier this evening from SNL read thru.

TMZ reported that AEW stars Sammy Guevara and Andrade got into a backstage altercation, with Andrade sent home from TBS' AEW Dynamite.

In this preview for tonight's Big Sky: Deadly Trails, Jenny and Beau pay someone close to Jenny a visit. But it's not a social call...

Stranger Things 2 Originally Had Different Fates for Will & Bob

The Stranger Things writers shared via Twitter their original plan for Bob and Will that definitely would've changed things moving forward.