The Star Trek: Discovery episode "Choose to Live" shows a potentially recurring problem of what happens when one group has all the control of dilithium in the galaxy. One such threat comes in a form of J'Vini (Ayesha Mansur Gonsalves), a citizen of Ni'Var and nun of the Qowat Milat, originally introduced in Star Trek: Picard. She and her band end up killing the first officer of the USS Credence and stealing the dilithium he was tasked to deliver to a membership planet of the Federation. Starfleet assigns Burnham (Sonequa Martin-Green) and Discovery to work with Ni'Var and Burnham's mother Gabrielle (Sonja Sohn) on behalf of the Qowat Milat to apprehend the fugitive and her co-conspirators. It's one of those missions that needed to be done under Ni'Var rules and required keeping respect within the Qowat Milat traditions.

The other arcs have Saru (Doug Jones) providing guidance to Tilly (Mary Wiseman) to try things she wouldn't normally do. Stamets (Anthony Rapp) and Booker (David Ajala) make sense of the data last collected from the previous episode of the galactic threat with the Ni'Var's help. Dr. Culber (Wilson Cruz) works to transfer Gray's (Ian Alexander) consciousness to a golem with help of Adira (Blu del Barrio) and the Trill Guardian Xi (Andreas Apergis). Written by Terri Hughes Burton and directed by Christopher J. Byrne, "Choose to Live" felt like an indirect crossover episode, because it pulls several key elements from Picard.

It was a nice nod to the greater connective tissue of its current canon and it didn't make the viewer feel like they were obligated to do "homework" by having seeking out another show for context. The premise of the episode leaves a little to be desired since the motivation feels like it was pulled out of nowhere. It's one of those thought exercises where you're left wondering if a simple phone call could have solved this in no time. The logic falls a bit flat for the sake of action, but I guess duress and desperation must dictate the narrative. At least we have the other storyline threads outside of the main narrative, which maintain their independence while still contributing to a greater sense of cohesion. What continues to be a huge positive for me is the building chemistry between Rapp & Ajala as well as the ongoing dynamic between Cruz, Alexander, and del Barrio. 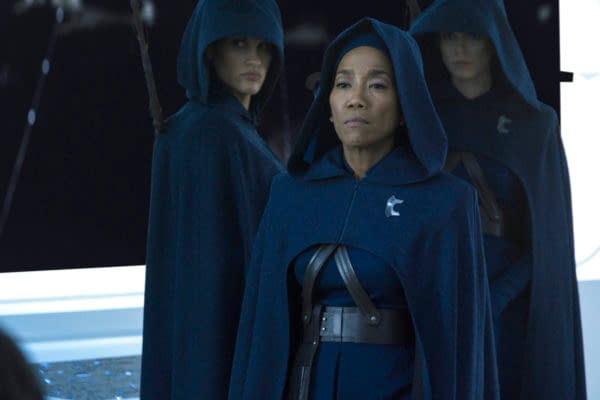 Review by Tom Chang
6/10
Star Trek: Discovery Season 4 episode "Choose to Live" deals with an ethical problem involving dilithium that probably should have been fleshed out more. Aside from the main action-oriented arc, the other storylines are kept within the more traditional Trek feel of problem-solving. Season all-stars Anthony Rapp and David Ajala continue to impress with their performances.
Credits
Director
Christopher J. Byrne