Hate to sound like a broken record, but testing the emotional stability of a character to perform their regular duties after a traumatic event is one of the most revisited clichés on television, and Paramount+'s Star Trek: Discovery is quite guilty of. In this case, it's more understandable since the character of interest involves its non-Starfleet member, Cleveland Booker (David Ajala) who was forced to witness his home get "Alderaan'd" in the previous episode. Consider this your official minor spoilers warning before we take a look at the episode "Anomaly."

Discovery is tasked to investigate the season-long phenomena (like the Burn in the third season) we were introduced to in the season opener to try to get a handle on it. We see the crew at full strength with Saru (Doug Jones) back in the fold for some Kirk-Spock vibes (especially with how the ranks & titles work out). So there are several characters who get to shine beyond our two upfront leads in Sonequa Martin-Green's Michael Burnham and Ajala's Book. Beyond our two usual suspects, Jones' Saru, Mary Wiseman's Tilly, and Blu del Barrio's Adira, with Anthony Rapp delivering one of his strongest performances as Stamets in the series run so far. While we're used to seeing Discovery's chief engineer go all Gordon Ramsey with those he's familiar with, there's an awkwardness and drive in the way he carried himself as he attempted to reach out and connect with Book. Ironically, the empath needed one of the most self-absorbed crew members to talk him down.

Directed by Olatunde Osunsanmi and written by Anne Cofell Saunders & Glenise Mullins, "Anomaly" went beyond the conventional "survival mission" approach by relying more on the importance of one's spirit over just another round of conventional "Star Trek" techno-babble. It also showed a character dealing with extreme trauma and the importance of having a nurturing environment to help with the process of healing. Star Trek: Discovery streams Thursdays on Paramount+. 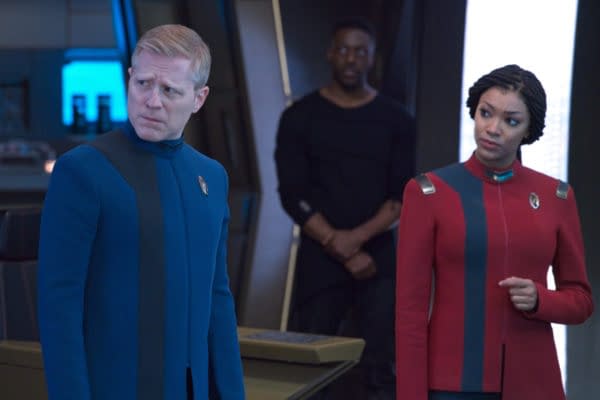 Saved by the Bell Cinematographer on Bridging Old/New SBTB Generations

Cinematographer Tom Magill spoke with Bleeding Cool on updating Saved by the Bell from its 90s roots & evolving to its Peacock incarnation.