We've all just seen the Doctor Who finale, The Timeless Children, over in the UK. And let's say, while it answered some questions it asked others, and left some important ones dangling. Ten thoughts anyone? Spoilers of course…

1.The Cyberships Hung In The Sky In Much The Same Way That Silver Bricks Don't

We have the dead. The converted. Is there a difference? You know, Chris Chibnall has come a long way since he wrote Cyberwoman for Torchwood. The Cybermen in all different types. But the biggest reference to episodes past has to be hiding inside the Cybermen costumes, as once they did in the sixties with the Daleks… but could all this reinvention of Cybermen with body horror, and the concept of going further, to full non-organic status seem a step too far? Or is that the Time Lord collars?

2. Loving It When A Plan Comes Together

Graham would make a great party planner, if he could only get the party hat off. Though as Ko Shamur says, it's hard to get deliveries out here. Be a pacifist tomorrow? The Doctor would prefer to be a pacifist. The fam now do stuff. Throw bombs, dress as Cybermen, get on with things, take down the Master. But she has turned Ko Shamur back into a weapon again. It's what she does. and gets out of committing genocide one more time. Cybertime Lords have to count as a new species… but does the Doctor have new companions now in Sheffield? Those from a Cyber Apocalyptic future, are out of place and out of time… how will they cope the first time they see a Roomba?

And yes Doctor Who did it before the Wachowskis. And did we really get a 'give it so much more of what it wants until it overloads' solution? Turns out that there's a lot of Doctor to share – all of her.

4. Master Of His Domain

The most glorious moment of The Master, chewing on every stick of furniture, or cyberlimb, and even channelling The Apprentice to the Cybermen. "I deserve to be your business partner because I've performed well in all the tasks," of course he survived, Doctor Who will never fire The Master. Of course he survived. You get to decide how. Oh and was that a 'we' about assassinating Presidents of Gallifrey? Obviously, the Master did but what about the Doctor? Does Borusa count?

As I mentioned earlier, we met Tecteun, the first space-faring Gallifreyan – or Shabogan I suppose now – who finds a young girl by a portal from another universe. Who she takes to Gallifrey and who dies there only to regenerate. The first ever regeneration – on Gallifrey at least. And who then, under the study of Tectaune, regenerated again and again. The Doctor's regeneration cycle is not fixed to twelve (plus Time Lord additions). The First Doctor was not the First Doctor, indeed we saw several more of them tonight, male and female, of different ethnic origins. The Doctor was many more – and indeed, was originally a female black child too. The Doctor's own genes are behind the Time Lord's origins, and their ability to regenerate, even as the Doctor was forced to be a child again, her memories erased. It's all her – even the Master – and it also restores much of the mystery of the Doctor. Who is she? We don't know – and we never knew. Doctor Who? Haven't a clue. Never did. And there are lots more of her out there… and how much did the Master know? There was that reference of knowing the Doctor since she was a young girl…

My eldest daughter Eve has just told me that the Doctor is actually from the planet Bob named after a horse called Bob. and right now, that is as valid a theory as anyone else has. I certainly can't beat it.

6. The Faces Of Morbius

And it would also at the moment be remiss of me not to mention that scene in The Brain Of Morbius when we got to see lots of Doctors before the First, before the twelve regeneration limit had been decided upon by the show. That got hand-wabed away – is it being handwaved back? You want a question? Here's a question. If all Time Lords have their twelve-regeneration cycle derived from the Doctor, who had her memories removed – how did River Song get her regeneration cycle? That was meant to have been derived from being conceived and gestated in the time vortex. If that is no longer the way – how did Melody Pond become River Song? 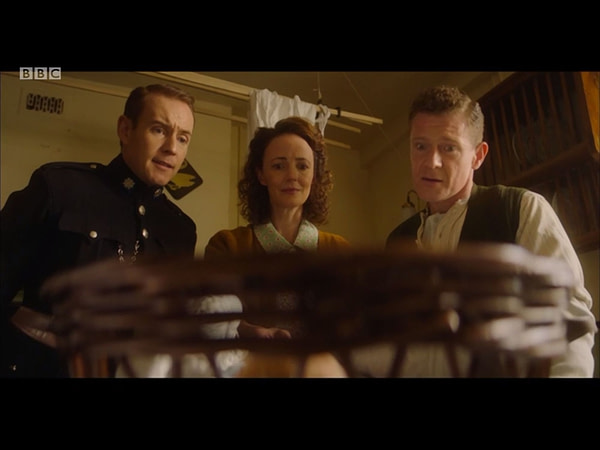 The Irish twentieth-century story is now reinterpreted as a message from the Doctor's parents to her, the only remaining part of her wiped memory – a foundling who grew up to join the police to make a difference, and who cannot die, only on his retirement to have something technological and terrible done to him. What did the Shabogans do to the Doctor? And why?

And what are The Division? What was the Doctor's role? How did they interfere in other civilisations? Could one of them be Earth?

Cybermen do rather suit those Time Lord collars, don't they? And by the looks of things, a Death Particle might be enough to actually stop that from happening. Anyone spot a Masterous way out? Or, as ever, will he just manage it without eplanation, maybe wiping his brow saying 'phew, that was tricky'

9. Anyone Have A Spare TARDIS?

It's not the best idea to leave TARDISes just hanging around. Okay, it was handy to come across a couple on Gallifrey, but disguising one as a tree in a quarryside is just asking for trouble – as is a suburban house in Sheffield. Someone's going to try and rob it, you watch… and yes, there's another story still to be told as to why the Doctor's TARDIS is the shape of a Police Box, given that The Fugitive Doctor, now probably a pre-First Doctor – and yes we have some new terminology to mess around with – also had her TARDIS as a Police Box. Maybe… it wanted to go back to that form. Or maybe it wanted to try and give s a hint to the Doctor to tell them who they really were.

10. I Want To Spend My Christmas With A Dalek… But New Year Will Do

Judoon Cold Case Squad? An imprisoned Doctor? And a reprise of Donna's last episode, when the Titanic smashed through the TARDIS? What? What? What? That was before a Christmas special as well…

Superman: Son Of Kal-El #5 gained international headlines when it featured Jon Kent, son of Clark Kent and Lois Lane, and the new Superman in the DC

We mentioned this was coming over a year ago, Chef's Kiss, the debut graphic novel written by Jarrett Melendez, drawn by Danica Brine, coloured by Hank

What Stephanie Phillips Got Past DC In Today's Harley Quinn #11

Stephanie Phillips time! Yesterday, Jed MacKay tweeted "Look, I know we're all excited about SAGA coming back, but let's not forget about the real comics

Deathstroke's T.R.U.S.T. Revealed – Will He Abuse It? (Spoilers)

Last year, DC Comics redefined the legacy of Deathstroke, Slade Wilson, as that of a paedophilic rapist. Something often observed by fan commentary, it

The portrayal of Poison Ivy in recent years at DC Comics has been a source of utter fascination for Bleeding Cool. At one point, there was a move from,

What A Surprise, Daredevil #1 With Same Creative Team & Matt Murdock

Marvel Comics has announced the genuinely shocking news that the cancellation of a title is now leading to a relaunch of that title, with a new number

With The CW's The Flash returning for a post-"Armageddon" Season 8 on March 9th, here's a look at what's ahead for Barry, Iris & Team Flash.

Reports are that WWE might be planning the return of a major star at this Saturday's Royal Rumble event and will continue to WrestleMania.

Stephen King's novel Later has been optioned by Blumhouse TV as a mini-series, with the project potentially a star vehicle for Lucy Liu.

The Righteous Gemstones Gets Season 3 Blessing From HBO

On Tuesday, HBO announced that it was blessing The Righteous Gemstones with a third season, less than a month after its Season 2 return.