Everything The Chadster Hated About AEW Dynamite Anniversary

The Elite defeated Daniel Bryan, Christian Cage, and Jurassic Express by pinning Jungle Boy with a quadruple V-Trigger. This was the sort of opening match for AEW Dynamite that really cheeses The Chadster off. It was fast-paced. It was exciting. The crowd was super into it. Auugh! That's so unfair! To give you an idea of how unfair the treatment AEW receives from crowds vs the treatment WWE receives from crowds in, look to this match as a perfect example. There were so many high-risk moves in this match that were nearly botched, but because the match was so much fun and the crowd loves AEW so much, they just went along with it, like when Luchasaurus missed a running hurricanrana from the ring apron to the floor or when the Young Bucks messed up an Indietaker to the outside on Christian Cage. But The Chadster guesses AEW has earned "goodwill" and that's why the crowd lets them get away with it. It's so unfair! Even The Chadster had to admit the match was fun despite being sloppy in parts, which is just totally disrespectul.

CM Punk cut a promo about how much he loves wrestling. This was yet another example of the unfair bias against WWE that AEW crowds have. CM Punk came out in Philadelphia to talk about how he used to live there while he wrestled in Ring of Honor, but he couldn't even get the name of the city's favorite food right, because he offered to buy everyone cheesecakes instead of offering to buy them cheesesteaks. If someone like Goldberg had made that mistake, the crowd would have booed him straight out of the building and out of the city as well, but the crowd just let Punk disrespect their city like that because they're "happy to see him" and "participating in the joy of being part of the wrestling community." If you ask The Chadster, it's all a conspiracy to disparage all the hard work Mr. McMahon put into making the wrestling business is today, and The Chadster is pretty dang sick of it. Punk ended up challenging Daniel Garcia to a match for Rampage.

Arn Anderson went to visit Cody Rhodes at his home. Arn lit a trash can on fire outside and when Cody came out, Arn told Cody he went Hollywood, slapped him in the face, and made him throw his silk tie into the trash fire. Personally, The Chadster would have called the police if Arn Anderson lit The Chadster's garbage can on fire, but The Chadster guesses AEW stars can get away with anything.

Sammy Guevara pinned Bobby Fish with the GTH to retain the TNT Championship. You can guess The Chadster's feelings on this match. Bobby Fish was one of the stars of The Chadster's beloved NXT during the Wednesday Night Wars, so his joining AEW is really a knife in The Chadster's back. That he put on such an epic match with the TNT Champion was just rubbing salt in the wounds. The one saving grace is that Dan Lambert, whose ideas on AEW The Chadster agrees with, attacked with American Top Team and laid Sammy out after the match, but then Chris Jericho and Jake Hager ruined it by making the save, setting up a tag team match for next week that will feature former UFC Champion Junior dos Santos. Auughh! So disrespectul!

The Acclaimed rapped about wrestling the Lucha Brothers on AEW Rampage, reminding The Chadster that he will also be forced to watch that show, which nearly brought The Chadster to tears.

Tony Schiavone and Aubrey Edwards unveiled the TBS Championship, a new belt in the Women's Division that will be awarded to the winner of a tournament in January after Dynamite moves to TBS. Personally, The Chadster feels that AEW has enough excitement with the TNT Championship, and adding another secondary title is just unnecessary. If they were going to add another one though, they should try taking the direction of WWE and introducing a belt like the 24/7 championship so people like Joey Janella would have something to do on the show.

Jim Ross interviewed Darby Allin, who revealed the reason he paints half his face is because he's half dead inside. That is also how The Chadster feels after watching AEW for two years.

Darby Allin defeated Nick Comoroto with a Coffin Drop. After the match, Sting no-sold a Diamond Cutter from QT Marshall and hit him with a Scorpion Death Drop. The way that Tony Khan books Sting to still look like a legend at his age is incredibly disrespectful because it sullies the image The Chadster would have liked to remember the end of Sting's career with: losing to Triple H in a WWE vs. WCW match at WrestleMania.

In an interview with Tony Schiavone, Dante Martin said he would fight anyone in AEW, so Malakai Black appeared, misted him, and kicked him in the face. That's what you get, Dante Martin. Malakai Black should kick anyone who tries to wrestle on Dynamite. That would save The Chadster a lot of grief.

Ricky Starks badmouth Brian Cage in the ring because he assumed Cage wasn't in Philly, but Cage was in Philly and he quickly ran Starks off… but not before setting up a Street Fight for Rampage. A hardcore match in Philadelphia?! AEW is just ripping off Extreme Rules now! Auughh man!

In a video package, the women's roster announced their plans to win the TBS Championship. That's months away! How can AEW think so far ahead?! Wrestling fans just don't have memories that long. WWE has focus tested this. Auugh!

Serena Deeb prevented Hikaru Shida from getting her fiftieth win in AEW, making her tap to the Serenity Lock after Shida kicked out of the Deebtox. After the match, Deeb went full heel and attacked Shida with the award trophy AEW created for her fiftieth win. The Chadster is not a fan of how many different storylines AEW seems to be developing for its women's division. That was the one area where WWE was universally considered superior, dang it! So unfair!

Alex Marvez tried to interview Darby Allin in the parking garage, but The Pinnacle, wearing black masks, attacked and beat him up. The Chadster finds that totally unfair because Darby Allin is already sympathetic enough as a babyface. What is AEW trying to do here? Turn him into a megastar? That would be so disrespectful to WWE.

Lio Rush offered to help Dante Martin in his fight with Malakai Black using Rush's skills as a financial advisor. The Chadster wonders if Rush could help The Chadster with his sexual impotence.

Backstage, Britt Baker said she didn't care about the TBS Championship except that it would get some of the other women off her back. The Chadster believes that's how more people in AEW should treat the title belts.

Finally, the main event of AEW Dynamite Anniversary was a Casino Ladder Match with a chip suspended above the ring. The person who retrieves the chip gets a future AEW World Championship title shot. The known competitors were Orange Cassidy, Pac, Andrade El Idolo, Matt Hardy, Lance Archer, and John Moxley, and those six alone were unfair enough. This is a television show, not a PPV. What is Tony Khan thinking?! But the real salt in the wounds for The Chadster came from the Joker, the mystery competitor who entered last. It was Hangman Adam Page, back from his paternity leave to the massive adulation of the crowd. Page won the match, though everyone in it had a chance to shine with some big spots and brutal-looking moves. It was so unfair. AEW has been building Adam Page's redemption story since he lost the very first AEW Championship match against Chris Jericho. That kind of long-term booking is unheard of in sports entertainment, and it's so disrespectful of Tony Khan to press that kind of advantage on The Chadster's beloved WWE. Page is a bonafide star, and he wasn't signed from WWE or lured out of retirement. Thanks to Adam Page's return, The Chadster will spend at least another two weeks unable to have sexual intercourse with is wife. Why, Tony Khan? Why?! 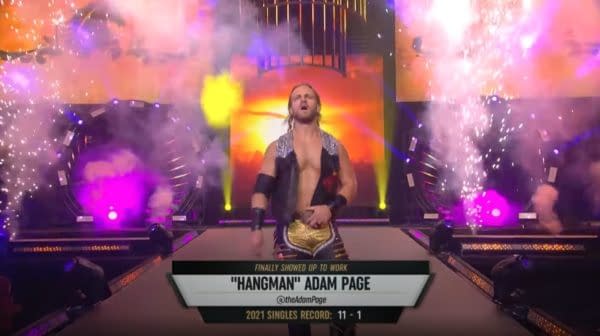