The third season finale of Hulu's The Orville: New Horizons can best be described as a light-hearted coast to a finish line given the sci-fi series uncertain status in the appropriately-titled "Future Unknown." It not only features a wedding but also a reminder of the harsh realities that come with the series' version of the "Prime Directive," which clicks on par with its inspiration from Star Trek. The major battles, giant plot twists, and tragic deaths were left to the previous episodes, as the finale focused on the show's foundation… it's cast. Consider this your minor spoilers warning moving forward…

The episode begins with a Moclan version of renewing marriage vows, and we get the primal-type of the ceremony where Bortus (Peter Macon) chases Klyden (Chad L. Coleman) into a forest on a planet, which inspires Isaac (Mark Jackson) back on the Orville to research mating rituals with Claire (Penny Johnson Jerald). Following his proposal, we get some "will she, won't she" play that most shows that go down this narrative route go, along with a naïve suggestion from LaMarr (J Lee) to the impressionable child-like Isaac to "test the waters" before settling down… to expected results.

If you've seen storylines like these before, then you know that there are usually boxes that need to be checked off, so to speak. And our finale doesn't miss a beat in that regard, even to the point where Isaac doesn't exactly share his "wedding guest invitations" with the crew after contacting the Kaylon homeworld. Again, more checking off boxes on your rom-com scorecard. The B arc is a returning face in Lysella, with Giorgia Whigham reprising the role from "Majority Rule". During the events of the first season episode, LaMarr was arrested for his twerking on a statue in Sargus 4, to which Lysella was instrumental in helping to free him. Now, she's fleeing the planet because of the deteriorated state it's now in, using a Planetary Union communicator… technology she wasn't supposed to have.

Lysella gets a crash course narrative as a "modern" character seeing future technology at work and naturally becomes overwhelmed, considering the world she's come from. With Kelly (Adrianne Palicki) as her guide, the story arc serves as a humble reminder that some of Star Trek's most memorable moments involved characters violating that Prime Directive in a way that reminds us of why it's there in the first place. To the uninitiated, it's the principle for the organization not to interfere with a society not advanced and mature enough to handle such advancements due to its potential abuse. Hulu's The Orville also deserves credit for handling that narrative home as well.  As for the season itself, I don't mind "Future Unknown" running a bit on "cruise control" to that finish line considering the uncertainty of the series' future & the epic levels achieved during the season's penultimate episode. Writer, director & star Seth MacFarlane deserves all the credit in the world for creating something this magical (and yes, I'm daring to say that it's become as superior a body of work as Family Guy). 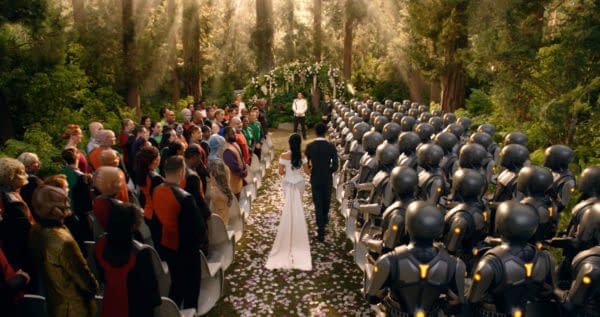 Review by Tom Chang
8.5/10
Given all the excitement The Orville: New Horizons has given us, the season three finale, "Future Unknown," provided a satisfying, light-hearted cherry on top. The episode could serve as an intimate and personal wrap to the series, but it would be a travesty if Disney and Hulu decided the ride needed to stop now. Not when things have gotten this good. Writer, director & series star Seth MacFarlane deserves tons of credit for creating something this magical, as do the amazing teams on both sides of the camera who brought the vision to life.
Credits
Director
Seth MacFarlane

House of the Dragon Promo: You Want Dragons? Oh, They've Got Dragons

With HBO's "Game of Thrones" prequel series premiering this Sunday, here's a very dragon & fire-filled promo for House of the Dragon.

Reports are Rory Culkin (Under the Banner of Heaven) has joined the Season 6 cast of Netflix, Charlie Brooker & Annabel Jones' Black Mirror.

The original Doctor Who Season 2 (with William Hartnell's First Doctor) is getting the Blu-ray boxset treatment with tons of extra features.