This week on FX's What We Do in the Shadows "The Siren", our dear vampires deal with self-worth and sirens. Turns out sirens look completely different than we imagined—so far we have been taught there are many misconceptions we have about fantastical beings… except for trolls. Once again, another good episode for this season. It was an emotionally charged episode, to be honest.

At first, I was not sure how I felt about this week's episode but after a second viewing, I found it to actually be a very sweet outing. There were so many little moments that stuck with me, from the blossoming relationship between Colin Robinson (Mark Proksch) and Laszlo (Matt Berry) to the depressed Nadja Doll (voiced by Natasia Demetriou). Once again, I am enjoying how the characters are being fleshed out this season and how we are getting to know new sides of them that had not been quite explored yet.

In this episode of What We Do in the Shadows, Colin and Laszlo terrorize a boat full of people and set sail to Plum Island—an animal disease research center owned by the government which Colin believes might hold the answer to his being an energy vampire. Once again, though? Can we talk about Colin's fascination with poop? He remarks it is not the first time a lady poops on him… not to mention his giddy laugh when Laszlo says "poop decks."

However, as both Colin and Laszlo are drawn to the most beautiful sound they have ever heard, they crash on an island inhabited by the siren Sheila (Catherine Cohen), who keeps singing to enchant them. This is a very different siren that the ones we are used to, this one looks more like a bird. Dare I say, "chicken"? I dare! Laszlo manages to escape but Colin though falls in love… or at least what he thinks is love. It was very sweet though, they really seemed to like each other and had a nice time. But it is Laszlo that keeps surprising me with how he seems to be holding better relationships with those around him. First, he promises to not leave Colin, and even though he ends up having to, he still asks Guillermo for help in finding a device to block sound & goes save Colin afterward (even though he falls into BestBuy's technological charms). Yet another reason why I think he is building up to probably lead the council… ahem… he definitely should.

On The Doll's end, she has been feeling out of place and left out. I was so taken aback by the little memories she made with all the members of the house. It was so sweet and sad. It was like seeing a nicer version of Chucky. Now that Nadja (Demetriou) is busy with council stuff, she feels like a third wheel in the home, so The Doll runs away. First off, hats off to Demetriou for portraying two very distinct versions of the same character. Equally hilarious as well. Also, it was very nice that both Nadja's managed to find the root of their issue and acknowledge it, and also promise to try to (somewhat) healthily manage it in the future. I was so sure that The Doll would leave to the other plane, so I am so glad she did not since having both of them on the show adds a slight twist to the house's dynamic. Oh, and seeing Nadja doll spirit take on different forms was hysterical on so many levels.

But Colin takes the cake for the most heartbreaking part of this episode of What We Do in the Shadows. He makes it clear to Laszlo that when Sheila is singing he cannot resist her, but when she is not singing he does not want to resist her. I think even though it was probably not love, it was the closest Colin has felt to that feeling. I think it is very interesting how loneliness seems to be a thread this season with several characters. We saw it with The Doll, and earlier episodes with Nandor (Kayvan Novak), with Guillermo (Harvey Guillen) somewhat, and with the Sire… hell, I think even the hellhound as well. Though I think Colin was hiding some feels at the end in spite of being his usually asshole-ish self. I hope he gets to find his answers (and Sheila) soon. 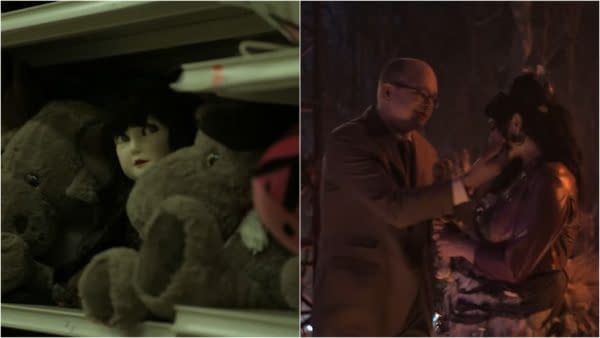 Review by Alejandra Bodden
8/10
This week on FX's What We Do in the Shadows "The Siren", our dear vampires deal with self-worth and sirens. Turns out sirens look completely different than we imagined—so far we have been taught there are many misconceptions we have about fantastical beings... except for trolls. Once again, another good episode for this season. It was an emotionally charged episode, to be honest.

Spy x Family: What We're Looking for Out of Season 2 & Film

With the first season having wrapped, here's what we're looking for out of Crunchyroll's upcoming Spy x Family Season 2 and film.

The Last of Us Episode 5 Will Be Available Early on HBO Max, On Demand

If you're interested in checking out the Super Bowl next Sunday, you can catch HBO's The Last of Us Ep. 5 early on HBO Max & HBO On Demand.

The Flash showrunner Eric Wallace had some interesting things to share/tease about Stephen Amell's return to the Arrowverse for its final run.

Psych fans took to Twitter to get #Psych4 trending to let Peacock know that they want a fourth film, and Timothy Omundson approves.

Thanks to the mysteries of Paramount Mountain, we got our Star Trek: Strange New Worlds/Lower Decks crossover sooner than expected.