Yellowjackets is getting closer to its season one finale on Showtime, bringing the questions and theories closer to the answers we crave. A lot happened in this eighth episode, so major spoilers will be plentiful…you've been warned, buzz buzz.

Previously on Yellowjackets, we thought Van got a little too…eaten…by that one wolf, I mean they were about to give the woman a Viking-style funeral for a minute there. She was missing something you typically need on your face, a cheek, and it helps to have skin intact so infections aren't a thing. After pulling her off the fire, and a jump to the intro (which I still love so much), we see Laura Lee at church camp diving into the pool head first making contact with the bottom giving her an obvious head wound like a scene from Jaws. Laura rightfully thanks the lifeguard for saving her life, only to be told it was the Christian god who was there for her along with the lifeguards oddly oiled chest and gold cross necklace. If you couldn't tell I'm an ex-Christian in deconstruction mode after a childhood of interesting beliefs, "totally not a cult" *wink, wink* *slight sobbing*. By the end of that scene I was screaming that an ambulance should have been called, but then we go forward in time to the woods and cabin.

The scene featuring Shauna's discussion with her daughter was rough but you could see both sides of it all. While I could be mad at the daughter for solely judging the mom, she's correct about it being weird not finding anything about him online. Shauna does what she should have done previously and looks into what her daughter talked about. Yellowjackets explores the potential that a reunion would have on future events, starting with Jeff trying to get Shauna into the idea of wearing a yellow expensive dress he bought for her (which now that I think about it feels so weird of a color choice). Back at the woods in a flashback conversation between Natalie and Ben, a really interesting and heartbreaking piece of information is shared. Ben admits to his sexuality and talks about his former boyfriend Paul, honestly it felt so impactful for his character in that moment to let his guard down.

Happy NYE to these women only. pic.twitter.com/BKC6Ay0eBm

As much as Misty is one crazy bitch, she's a dependable individual when it comes to keeping Natalie in-check when it comes to the entrance back into addiction that almost occurs. I laughed so hard when the scene came up that had Misty burst into Natalie's hotel room, it was a moment that had me rooting for the way her character cared about that. Jackie on the other hand, continues to be solemn by the lake and stick her nose into other issues, like the stuff between Natalie and Travis. It all leads to a gut-wrenching fight between Natalie and Travis where two hurt people exchange hurtful words. Jackie is not becoming anyone's favorite person anytime soon. A home visit and walk between Shauna and Taissa has revelations come out. Taissa admits to her relationship woes and the sleepwalking. I'm not one to always feel for Taisa but her trying so hard to control her life and breaking down in front of Shauna was a necessary scene and step for her.

Yellowjackets took it up a notch with this episode, I found it so hard to watch the moments where Van was getting her stitches. The guttural noises and muffled screams were insane. It helps that they don't stick on that scene or moment, but the emotional turmoil in the second-half of the episode picks it all right back up from Natalie's outburst to Misty's bird almost having a broken neck. Taissa and Shauna opening up to one another in this episode was so important, slowly these women are realizing how much they know each other and can actually be there for those difficult moments. Shauna continues to be slightly blinded by the promise of Adam's artist personality, and is I guess agreeing to a cabin getaway weekend with him? The woods and Shauna have not been a great match previously, so my hope for this scenario isn't great. I theorize that Adam is very much off the grid, or at least portraying himself to be someone he's not. I think he could be connected to anyone from the team's past, maybe even Jackie or an unknown survivor. In any case,

Take a risk or starve to death. #Yellowjackets pic.twitter.com/39si0mXofD

Now on to my Yellowjackets theories and quick ranting. First off, fuck Jackie! What a dick move to reveal what she did to the whole group because she's salty about a diary and her milk toast boyfriend. It's weird when I find myself agreeing with Laura Lee about the plane and being afraid of her all at the same time. Going to an old friend, Natalie attempts to find out that information about Travis' bank account that is for sure going to reveal a lot or very little. Questions of the severity of Taissa's sleepwalking pop up for sure after she pushes away her wife and kid for their safety. What happened that was so bad out in those woods, because of Taissa, that she'd have this reaction?

While I can see Shauna's suspicion of Adam being the one they met up with that night, I still have some lingering thoughts about Jeff being more involved than we think. Adam isn't innocent, he's obviously hiding a lot, but I'm not sure he's hiding this one thing. Now, when I tell you I had a feeling in my stomach that the plane take off wasn't going to go well…I was right. I wasn't expecting the culprit to be a teddy bear bursting into mythical flames, but hey the forest is a batshit crazy character in itself. So, Laura Lee finally went to meet Jesus. Sorry, too soon? Hey it's too early and too late for good things to happen anymore, so let's just stay with the fact her teddy bear basically killed her. Anyways, as always let me know your own theories and ideas about Yellowjackets in the comments below!

Yes I've read your Adam theories, and just so you all know, there's one that basically no one has mentioned yet. I'm surprised but also not surprised! Anyway new #Yellowjackets tomorrow on @Showtime https://t.co/nbXCj9Tp4R 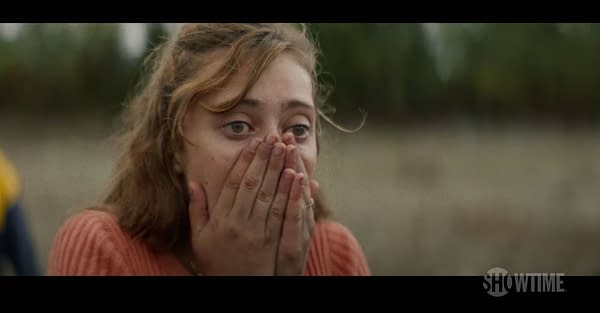 Review by Brittney Bender
10/10
Yellowjackets is becoming a force to be reckoned with, mixing supernatural elements with all the dramatic horrors a fan could hope for in this episode. Showtime is quickly becoming a place for profound storytelling that gives its audience a lingering sense of dread with this series, and trust me that's a high compliment.
Credits
Network
Showtime

Premiering May 19, Ethan Hawke stars in the audio drama Fishpriest, an Audible Original from Treefort Media written by Mike Batistick.

We have a new teaser for Hulu's The Orville: New Horizons, while Seth MacFarlane answers the internet's most-asked questions about him.

The CW released official preview images for The Flash S08E16, including a look at director Caity Lotz (Legends of Tomorrow) in action.

No one walked out on WWE Raw last night (unless you count viewers falling asleep), and the show was poorer for it. WWE needs to arrange more walkouts fast!

Animal Kingdom Season 6 Key Art: Will It Remain "Family 'Til The End"?

With the final season kicking off June 19th, the flames inch closer to the Codys in the newest key art for TNT's Animal Kingdom Season 6.