After last week's double-barreled season premiere, this newest episode moves a lot of pieces around the chessboard but is mostly pausing to take a breath and lick the Dutton family's recovering wounds. Really what this episode felt like was disjointed, as it mostly just told five different stories together without a strong overarching theme. Still, it's Paramount Network's Yellowstone, which makes it imminently watchable. Here's how things played out: Beth (Kelly Reilly) and Rip (Cole Hauser) continue their strange but somehow perfect relationship and continue to explore 13-year-old Carter (Finn Little) living with them. When Rip refers to the kid as Beth's "pet," it precipitates what may be the best exchange of the entire episode.

Off in Kayce's (Luke Grimes) world, he abuses his authority as Livestock Commissioner to execute a raid that murders the remaining militia members who attacked his family, then goes and terrorizes some carpetbagger Californian rancher who doesn't like his neighbor running his cattle up his road. And this is sort of key Yellowstone: you can't decide if we're supposed to root for the Dutton family or not. Yes, we like to see justice served, but also maybe we shouldn't let people have this much power?

In an emotional final scene, though, we see Kayce dealing with the emotional fallout on his family from the attack. His son Tate (Brecken Merrill) is not doing well. Here's an idea, Kayce– maybe instead of taking morning rides with your dad and harassing Californian millionaire alpaca ranchers (though we do like to see it), maybe you should get your son the professional help he needs, instead of yelling at Monica (Kelsey Asbille) to take him to a doctor, maybe YOU be the dad. Maybe YOU take him to the doctor. Ugh, these Duttons.

But the pieces of the narrative that move most interestingly, of course, are reserved for big John Dutton (Kevin Costner). Chief Rainwater (Gil Birmingham) finally reveals the man they caught who helped put together the assassination attempt on the Duttons. The best part of this is that Rainwater promises that they have unfinished business and that is what will keep me coming back to Yellowstone. Birmingham is an amazing actor and the twists and turns of his character are what make the show more than just rich white dudes with horses. More Chief Rainwater, please!

And that's ultimately where this episode leaves us: unfulfilled. It's still one of the best shows out there, but this feels like a filler episode between some pretty big plot points. However, given the tease we saw of episode 4, that may not be too far off the mark. If so, we can forgive this episode its need to move its chess pieces around the board.

You can watch this and all other new episodes of Yellowstone on the Paramount Network's website, assuming you have a cable subscription that includes the cable channel (of course, you can also wait for it to hit streaming).

Yellowstone Season 4 Episode 3 "All I See Is You" 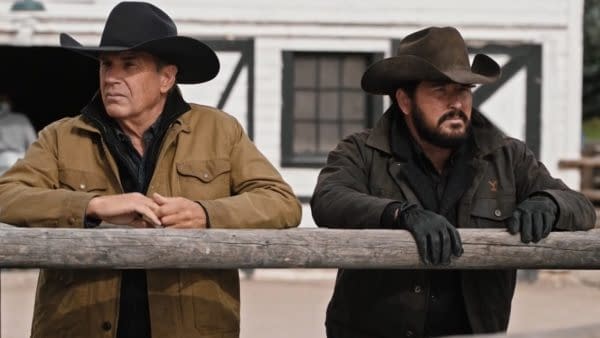 Review by Andy Wilson
7.5/10
An episode where not much happens, we take a breather & move specific plot points forward for bigger reveals later is forgivable for this show, as it is still pretty great. But it still feels a bit like a filler episode.