Adult Swim's Rick and Morty has been one of the best shows of the pandemic era. Without ever referencing it, series creators Dan Harmon and Justin Roiland successfully captured the bleakness, detachment, and nihilism so many people are feeling. Just like Season 4 felt like a lot of broadsides against the Trump era, Season 5's intention of only having high-concept, disconnected adventures collapses into the most beautiful singularity wherein the entirety of Rick and Morty canon collapse in on themselves and create something new. What a ride. And now, you can get it in your hot little hands as a Blu-Ray or DVD set or collectible steelbook– just in time for holiday giving. But is it worth your entertainment dollars? Undoubtedly, yes.

The genius of Season 5 of Rick and Morty came in its embrace of a new, yet ambitious, schedule. Embracing the production delays from the pandemic, the show decided to release two episodes a month, every month, for five months. And yet somehow, every single episode was a hit. Just. . . just look at these episodes:

"Rickmurai Jack" . . . it's been three months and I still can't quite wrap my head around what happened in its final minutes. My personal favorite episode "A Rickconvenient Mort" starts pulling the thread early and planting the seeds of a later split between Rick and Morty, but not before we explore more about toxic relationships. Plus, who doesn't love Alison Brie as Planetina?

But perhaps the greatest trick the show pulled in its Rick-like insistence all season long is that it doesn't like "canon" and interconnected storyline, yet somehow it provides a cohesive season-long rumination on toxic relationships and the need to walk away from the things that ultimately hurt us. It's brilliant.

So, yes, you get that metric ton of great Rick and Morty episodes. But what about the extras? You also get two videos of Dan Harmon and Justin Roiland doing a "B-storyline generator" which is pretty funny, as well as a behind-the-scenes look at the difficulties of producing the show during the pandemic. But one of the best parts is this set has collected all of the behind-the-scenes videos that you'd normally have to scour YouTube for and offered them all here in one place alongside their associated episode.

It's insights like these from the writers and creators that provided needed context for so much of this. As writer Jeff Loveness explained in the above discussion of the season finale, "Evil Morty is this product of a fucked-up system. He is a Zoomer growing up in late-stage capitalism. And he realizes: this whole thing is bad. And he has to burn it down–he has to break the Central Finite Curve–he has to break the toxic relationship between Rick and Morty that Morty has been manufactured into."

And that is how the show became mandatory pandemic-era viewing. It's that undeniable nihilism that mixes with irrepressible Morty-like naivete and whimsy. And speaking of, the real question that I'm sure so many of you are asking is "Yeah, bro, but, like isn't physical media dead?"

And let's have a real frank discussion here, folks. In the world of the streaming wars, the only sure bet is a physical copy. Here's a quick challenge: where do you watch Season 5 of Rick and Morty right now on streaming? Hulu? HBOMax? Nope and nope. And with an unknown future where who knows where Rick and Morty and other [adult swim] content will stream, the best way to make sure you always have access to watch this content is to own it. Prefer to watch things digitally? Great. You get a free digital download code, too.

So forget that Snake Jazz box set you were thinking about gifting this holiday season and go grab a Season 5 Rick and Morty steelbook instead. Or treat yourself. You're an adult and you deserve nice things. Or you're a piece of shit and don't. I don't know. But this is worth getting. 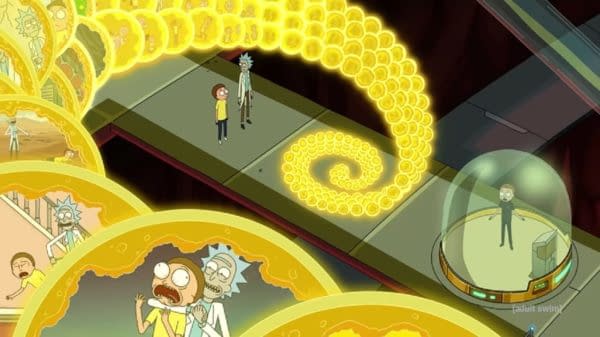 Review by Andy Wilson
9.5/10
To be fair, you have to have a very high IQ to understand Rick and Morty. The humor is extremely subtle, and without a solid grasp of theoretical physics, most of the jokes will go over a typical viewer's head. There's also Rick's nihilistic outlook, which is deftly woven into his characterization, his personal philosophy draws heavily from Narodnaya Volya literature, for instance. The fans understand this stuff; they have the intellectual capacity to truly appreciate the depths of these jokes, to realise that they're not just funny- they say something deep about LIFE. And... Ok I just can't anymore with this detached irony copypasta BS! This is good. Really really good. I know it's not cool to be sincere or to love something unironically, but this is great and you all should really own it.

The Last of Us Trailer: Joel & Ellie's Journey Begins This January

With the series hitting HBO/HBO Max on January 15, here's the official trailer for the Pedro Pascal & Bella Ramsey-starring The Last of Us.